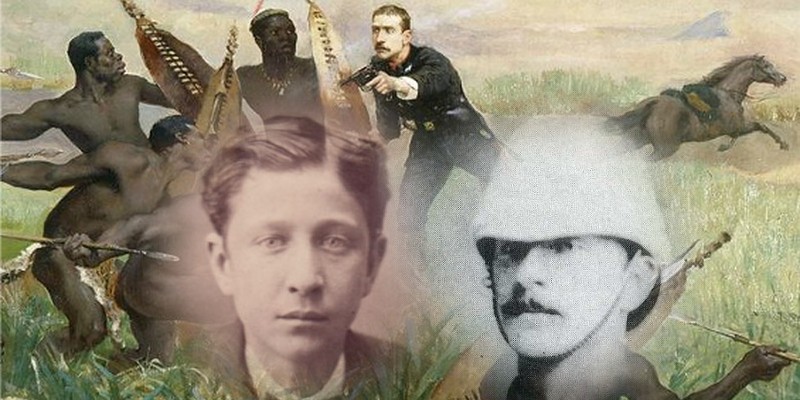 On June 1, 1879, Louis Napoleon was killed in action during the Anglo-Zulu War.

Trained as a soldier in Britain, at the outbreak of the Anglo-Zulu War in South Africa, Louis jumped at the chance to serve alongside British forces.

Louis was no stranger to military action—at the outbreak of the Franco-Prussian War, he had accompanied his father to the front and had come under fire at Saarbrücken.

With France now a republic, many in Britain saw Louis Napoleon as the last chance for France to reinstate a monarchy.

Queen Victoria reportedly believed it was the best hope for peace in Europe. There was even speculation that Louis might marry Queen Victoria’s youngest daughter, Princess Beatrice.

With this in mind, there was some reluctance to allow Prince Louis to take part in the African conflict.

It was only after significant pressure from Louis’s mother, Empress Eugénie, and from Queen Victoria herself that permission was granted.

Attached to Commander Thesiger’s staff, the intention was that Louis would only be an observer.

Louis’s close friend, Lieutenant Arthur Brigge warned him not to do anything rash, to avoid taking unnecessary risks, and to think of the Empress, his mother, at home, and the party of supporters that were full of hope to see him as the next Emperor.

Thesiger thought that attaching Louis to the Royal Engineers, whose duties were transport and reconnaissance, would not put the prince in any danger.

Tasked with ensuring Louis’s safety, Colonel Richard Harrison of the Royal Engineers was told that a strong escort must accompany Louis at all times.

When a forward scouting mission was planned for June 1, Louis was allowed to participate in the mistaken belief that the route would be safe.

Early in the morning of June 1, Lieutenant Jahleel Brenton Carey, a French speaker from Guernsey led the scouting party into the African bush.

don’t do anything rash, and avoid running unnecessary risks

Eager to see some action, Louis couldn’t believe his luck—at last, some excitement!

To avoid delays, he had persuaded Carey that there was no need for the full escort. After all, what could possibly go wrong—the route was safe.

What he lacked in military seniority, he made up for with a powerful personality. The young prince swiftly asserted command over the troop.

This was the life he had wished for—adventure on the African plains!

At noon, they stopped to rest, make some sketches of the terrain and start a camp fire. No one was posted on lookout duty—why bother? It wasn’t as if they were in any danger.

Just as they were about to set off again, all hell broke loose.

Screaming and yelling filled the air as about 40 Zulu warriors came running towards them, armed to the teeth with spears and shields.

Louis instinctively reached for the gun holster on his horse’s saddle, but the screaming had startled the horse and it bolted, Louis’s hand still grasping the holster.

Some one hundred yards of being dragged through the bush, the strap broke and Louis fell beneath the horse, his right arm getting trampled.

Drawing the gun with his left hand, he started to run, but the Zulus were too fast.

A searing pain shot through Louis’s leg as a Zulu spear pierced his thigh.

Filled with adrenaline, Louis pulled the spear free of the searing wound then fired on the Zulus.

Again, a sharp burning burst of agony as another spear struck his shoulder.

Still the Prince fought on, facing the attackers with the spear he pulled from his leg.

But it was all in vain.

Surrounded and overwhelmed, the spears came thick and fast, one bursting through his right eye and sinking into his brain. When finally his body was recovered, it had eighteen spear wounds.

Two of the troop were also killed and another missing. The four survivors included Lt Carey, who had made no effort to fire upon the Zulus.

Following an inquiry and pressure from Empress Eugénie and Queen Victoria, Carey was court marshaled and shunned for cowardice by his fellow officers for not standing and fighting.

Europe shuddered. The last of the Bonapartes had met his day of reckoning.

Had hopes for a lasting peace in Europe died with him?