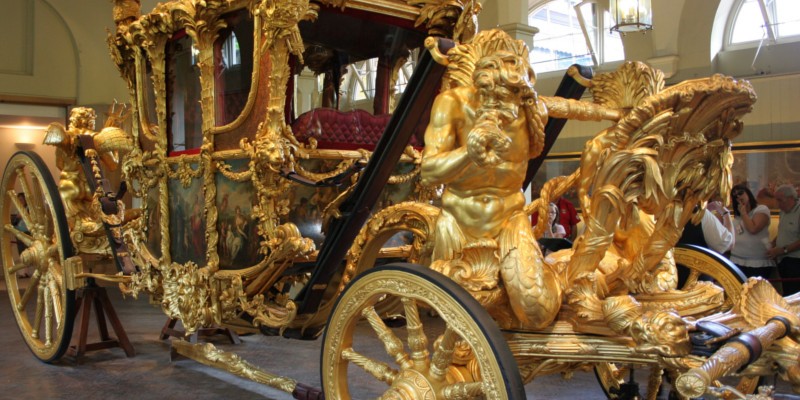 Here’s what’s in store in our article:

Electric windows, heating, and hydraulic stabilizers: these are the accouterments afforded a modern royal carriage fit for the longest reigning monarch in British history—Queen Elizabeth II.

Atop the roof sits a crown carved from timber from HMS Victory—Lord Nelson’s flagship.

Other timber segments from the Tower of London, Westminster Abbey, St Paul’s Cathedral, Hampton Court Palace, and a long list of historically significant buildings are inlaid into the interior lining of the coach.

It is, quite simply, a museum on wheels.

Taking around 10 years to build, the Diamond Jubilee State Coach is now part of the Royal Collection and has been officially put to use.

In June 2014, it was used for the first time at the State Opening of Parliament.

It is the latest in a long line of royal carriages going back several hundred years.

What’s the Difference between a Carriage and a Coach?

The word carriage is from Old Northern French cariage, meaning to carry in a vehicle.

Horsecarts showing signs of an early type of suspension have been found in Celtic graves from the Iron Age.

Egyptians, Romans, and Chinese used chariots and wagons for warfare and transport.

In the middle ages, carriages suspended with leather or chains were largely used by royalty and aristocrats and were often elaborately decorated and gilded—and also heavy and slow.

King Mathias Coribus (1458 – 90), King of Hungary and Croatia, wanted a faster way to travel about his Kingdom.

So the wheelwrights of the small post-town of Kocs began to build a horse-drawn vehicle with steel-spring suspension that was lighter, faster and could be towed by a single horse.

Kocs is pronounced “kotch” which is how we derive the English word coach.

When one looks at the variety of royal carriages throughout history, a number of adjectives spring to mind: magnificent, spectacular, sumptuous, resplendent. These are palaces on wheels—symbols of majesty and power—and perfect for making a grand entrance.

Pick your favorite(s) royal carriage from our shortlist of the grandest and enjoy the extended gallery of carriages.

Rig—a carriage and horse.
Equipage—an elegant horse-drawn carriage with its retinue of servants.
Turnout (or setout)—a carriage together with horses, harness, and attendants.
Cavalcade—a procession of carriages.

Reference
The Future of Post-Human Transportation: A Preface to a New Theory of Networks and Operations by Peter Baofu