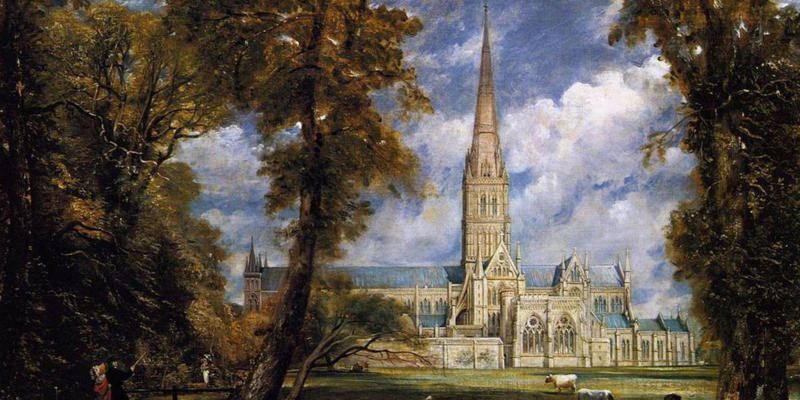 From the Middle Ages until the advent of the skyscraper, Cathedrals were often the world’s tallest buildings.
In 1311, the spire of Lincoln Cathedral surpassed the height of the Great Pyramid of Giza.

They reached for the heavens to the glory of God.

Immerse yourself in the majesty of these magnificent monuments with Gregorio Allegri’s captivating Miserere mei, Deus as we take a journey inside England’s Medieval Cathedrals.

A unique feature of Bristol Cathedral is its 14th-century Decorated Gothic vaulting. The short lierne ribs of the choir form beautiful stellar patterns that historian Nikolaus Pevsner called “superior to anything else in England” in terms of spatial imagination.

One of the largest cathedrals in England, Canterbury Cathedral is famous for its 12th- and 13th-century stained glass, its perpendicular nave, the tomb of the Black Prince, and the site of St. Thomas Becket’s murder.

The building of the nave, which began in 1323, was halted by plague and not completed until 150 years later.

Notable features include a transitional retro-choir, early Norman relief carvings and the 15th-century belfry. The spire can be seen from the English Channel.

Architecturally, Ely Cathedral is outstanding both for its scale and stylistic details. Built in a monumental Romanesque style, the galilee porch, lady chapel and choir were rebuilt in an exuberant Decorated Gothic.

One of the most important features is the central octagon built in 1322, which experts consider to be a wonder of English cathedral architecture.

A good example of the Decorated Gothic style of the 14th-century, Exeter Cathedral has the longest medieval vault in the world—running between two Norman towers built over the transepts.

Massive masonry piers characterize the Norman nave, and the largest medieval window in the world is the area of a tennis court.

The cloisters have the earliest example of fan-vaulting, making a distinctive setting for scenes of the Harry Potter film series.

A Norman nave and large central tower with unusual north transept and porch house an important treasure—the Mappa Mundi, a medieval map of the world dating from the 13th century.

The Early English Lady Chapel is considered “one of the most beautiful of the thirteenth century”.

The only one of the cathedrals to have retained three spires, Lichfield Cathedral suffered serious damage during the English Civil War. Even though all of the stained glass was destroyed, the Lady Chapel retained some of the finest medieval Flemish painted glass in existence.

The third largest in Britain, Lincoln Cathedral was reputedly the tallest building in the world for 238 years (1311–1549). The central spire collapsed in 1549 and was not rebuilt, but even so the Victorian writer John Ruskin called it “out and out the most precious piece of architecture in the British Isles and roughly speaking worth any two other cathedrals we have.”

Norwich Cathedral’s Norman tower surmounted by a 15th-century spire is the second tallest in England, surpassed only by Salisbury Cathedral. The spectacular vaulting has hundreds of ornately carved, painted and gilded bosses, each decorated with a theological image, and said to be without parallel in the Christian world.

One of the oldest in England, Oxford Cathedral’s 13th-century stone spire perfectly complements Oxford’s tradition as “the city of dreaming spires”. But the late-15th-century pendant vault over the Norman chancel is its most unusual feature.

Known for its imposing Early English Gothic West Front, Peterborough Cathedral’s nave has a decorated wooden ceiling which is unique in Britain and one of only four in Europe.

The structure of the building remains largely unaltered since it was completed almost 800 years ago.

Dating from the 7th century to 1522, Ripon Cathedral’s choir is famed for its richly carved 14th-century stalls, with many lively figures among the carvings.

St Albans is the second longest cathedral in the United Kingdom (after Winchester), but it has the longest nave. Much of the structure was built from bricks salvaged from the nearby site of an ancient Roman town called Verulamium. Medieval wall paintings and a painted wooden roof from the late 13th century are among its other attractions.

With its harmonious proportions and the tallest spire in the United Kingdon, Salisbury epitomises the English Medieval Cathedral. It houses the world’s oldest working clock (from AD 1386), and the best surviving of the four original copies of Magna Carta.

Wells has been variously described as “unquestionably one of the most beautiful” and as “the most poetic” of English cathedrals.

Pure Early English Gothic of the late 12th and early 13th centuries, Wells features deeply sculpted moldings and has retained much of the original glass.

The longest medieval cathedral in the world, Winchester’s spectacular perpendicular nave has been literally carved out of the original Norman interior, with its tall arches and prominent vertical design.

Winchester features elaborate wooden carvings from many different periods as well as a magnificent stone screen behind the High Altar.

Worcester Cathedral incorporates  styles from every century from the 11th to the 16th.

The earliest part of the building is the multi-columned Norman crypt, with the nave showing a unique and decorative transition between Norman and Gothic over a 200-year period.

The Cathedral chancel contains the tomb of King John.

One of the largest of its kind in Northern Europe, York Minster has a very wide Decorated Gothic nave with the largest expanse of medieval stained glass in the world. The large central window has fine Flowing Decorated tracery called the “Heart of Yorkshire”.

Now an honorific title, “Minster” is attributed to churches established in the Anglo-Saxon period as missionary teaching churches.