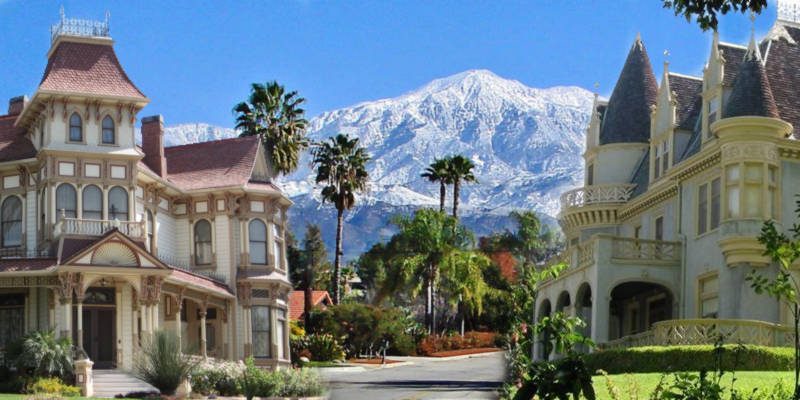 Redlands, in San Bernardino County, is one of the oldest cities in California. Named for its rich, red soil, it sits halfway between Los Angeles and Palm Springs, in the shadow of Southern California’s highest peaks.

This is citrus country, with lush groves and a temperate climate. Once called the “Orange Empire”, Redlands is now known as the “Jewel of the Inland Empire”. 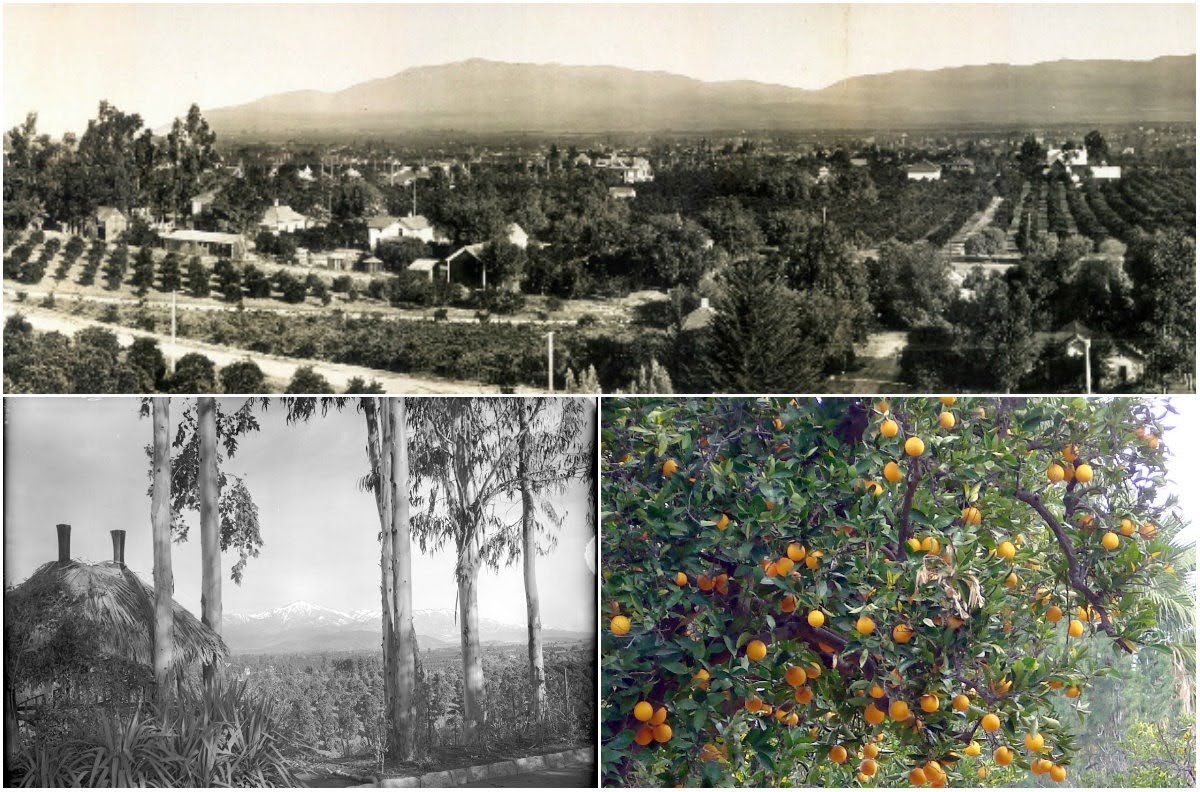 Orange groves once covered the valley.

For almost 75 years, the city was the center of the largest navel orange producing region in the world. The navel orange became a symbol of the Eden-like dream that was Southern California.

At the turn of the 20th century, Redlands was the “Palm Springs” of the next century, with roses being planted along many city thoroughfares.

People built their dream homes in whatever style they liked. Victorians sat alongside Colonials, Classic Boxes and Craftsmen homes.

Although many old homes were pulled down over the years, Redlands still has some beautiful late Victorians such as the Kimberly Crest House, The Edwards Mansion, and the Morey Mansion.

Kimberly Crest House and Gardens is a French château-style Victorian mansion listed on the National Register of Historic Places.

When tuberculosis took the lives of her husband and four of her six daughters, she moved to California to try to rebuild her life. She purchased 3 1/2 acres and had this beautiful home built—styled after a château she had seen in France. 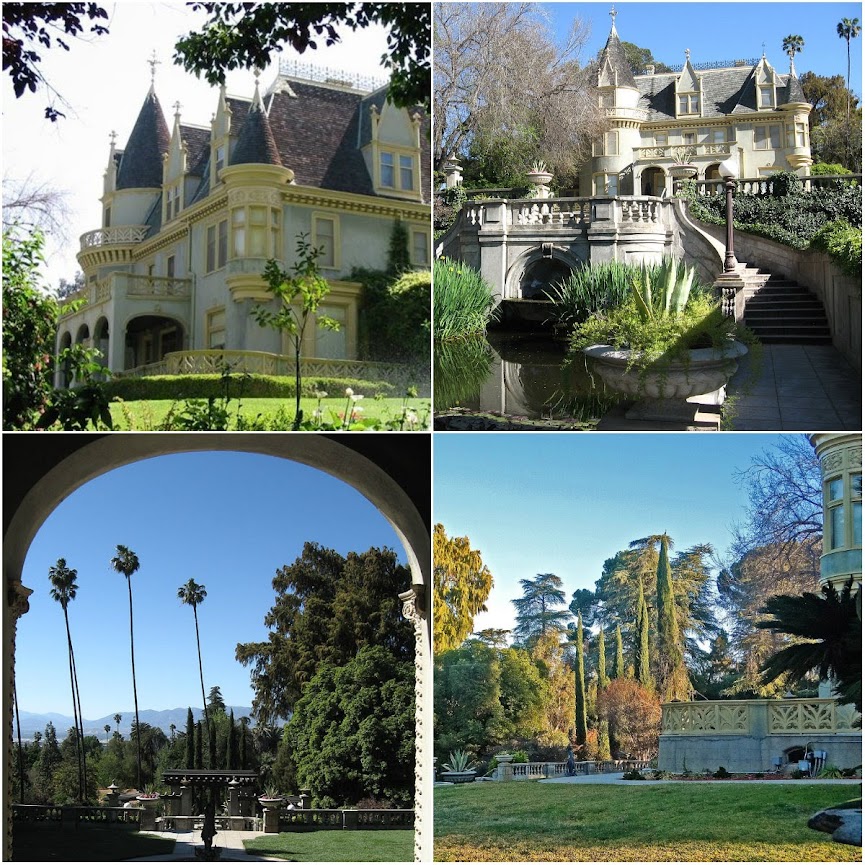 There were no mortgages in those days. People simply announced to the world that they had arrived by building their houses when they had enough money and paying for them in cash. The owners of Victorian homes often painted them in bright and flashy colors to stand out from other wealthy neighbors.

Built in 1890, the Morey Mansion was built using the funds from the sale of Sarah Morey’s citrus nursery.

Sarah Morey moved to Redlands in 1882 with her husband David, who worked as a carpenter and helped built the dam at Big Bear Lake. With seeds from local growers, Sarah started a citrus nursery which became one of the largest in the area.

Located on the bluffs overlooking San Timoteo Canyon, Morey Mansion is known for its commanding view. 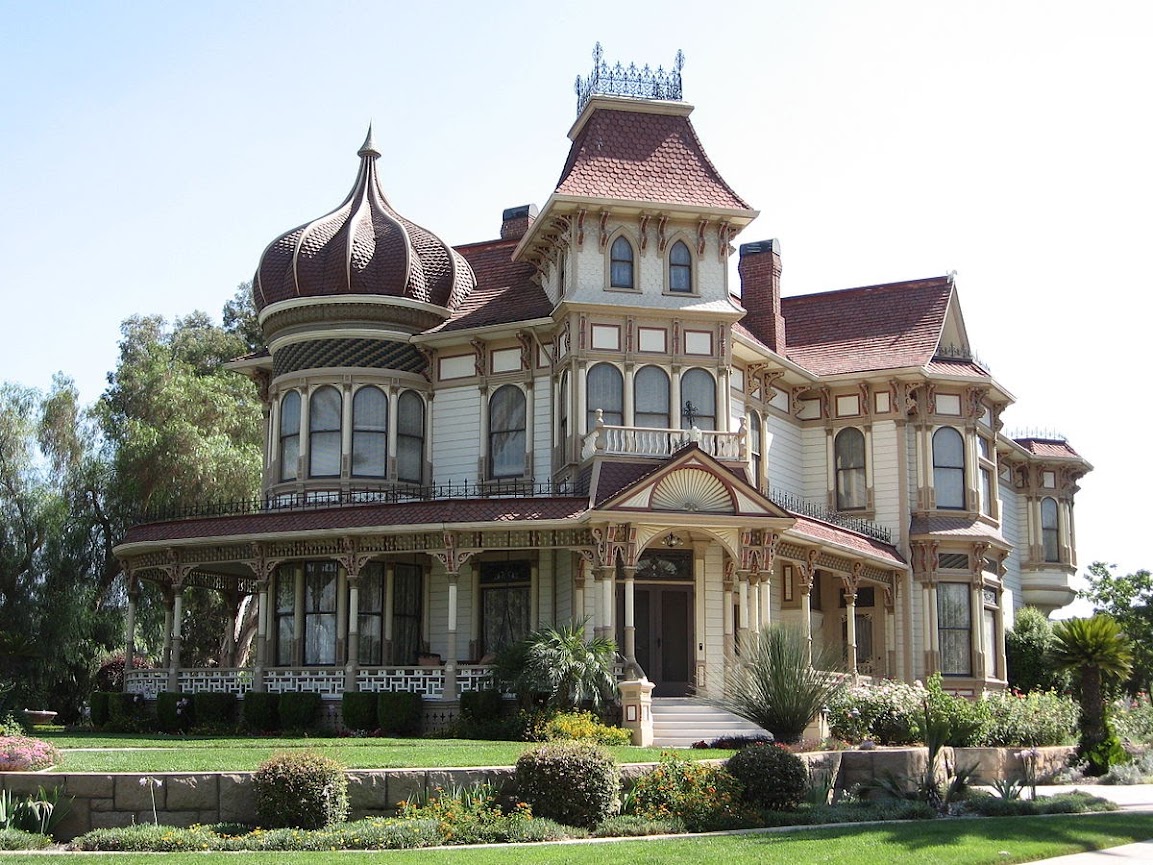 Inside the Morey Mansion.

In 1890, one of the founders of Redlands, James S. Edwards built a boarding house, which later became his family residence.

It is now a popular wedding location. 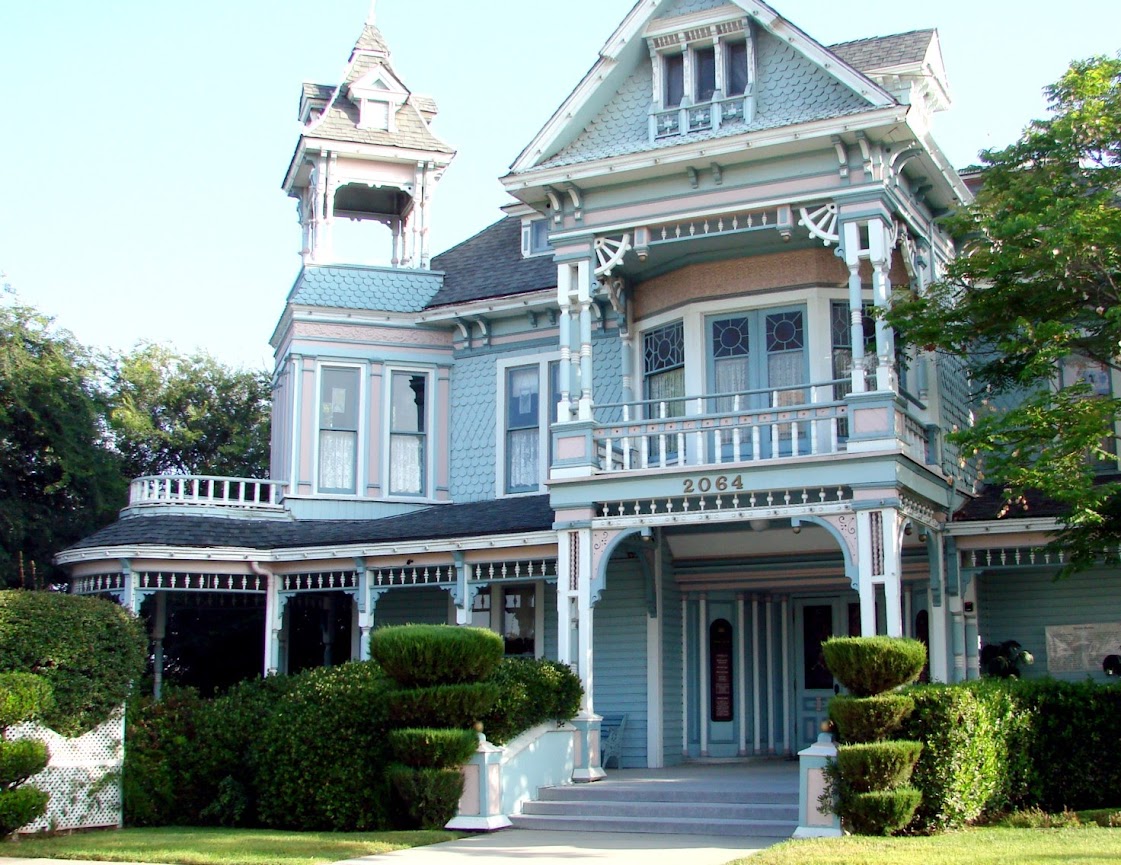 Built by Charles Kendall Adams, who lived in the house only 13 days before he died in July 1902, Kendall House (below) has block walls fashioned of stone by Italian stone masons.

Adams was an American educator and historian. He served as the second president of Cornell University from 1885 until 1892, and as president of the University of Wisconsin from 1892 until 1901. 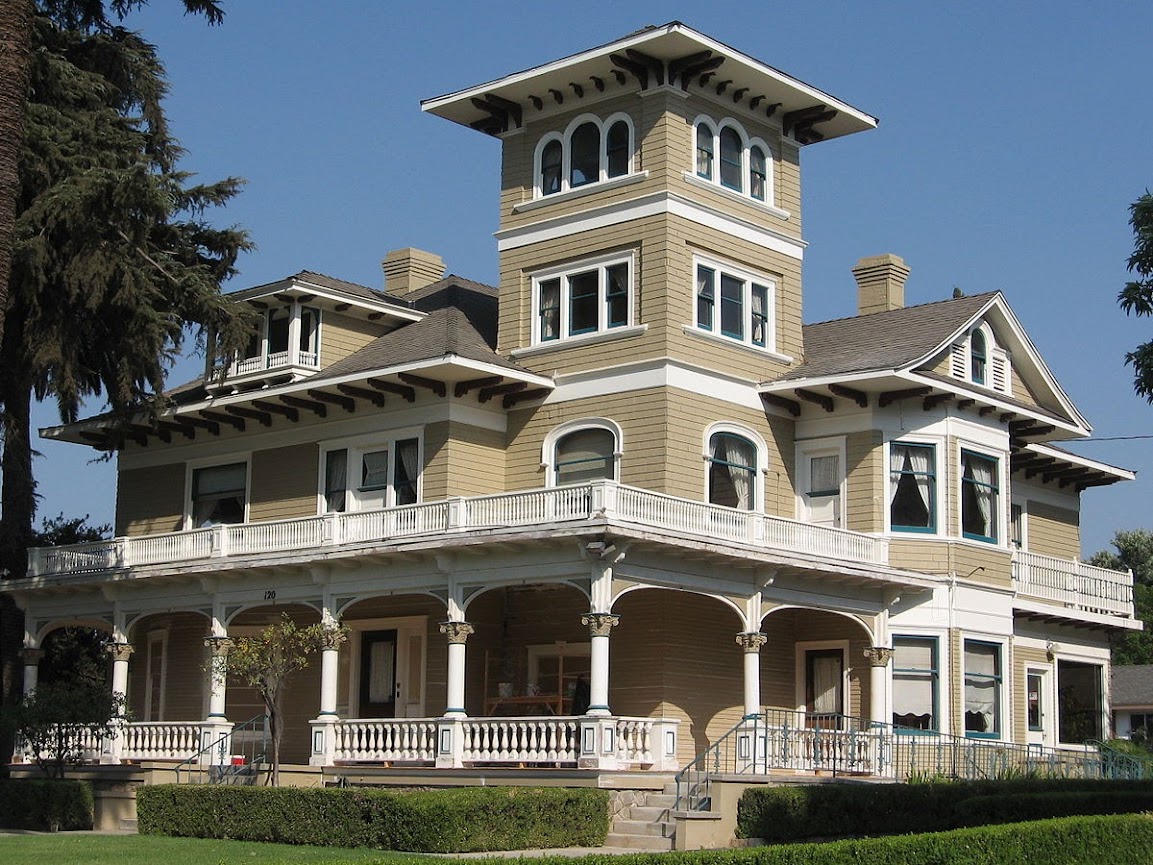 Dr. Benjamin Barton built the Barton Mansion (below) originally as a ranch and vineyard. Recently restored to its former glory, it is one of the oldest buildings in the Inland Empire. Neglected for many years, it developed a reputation for being haunted. 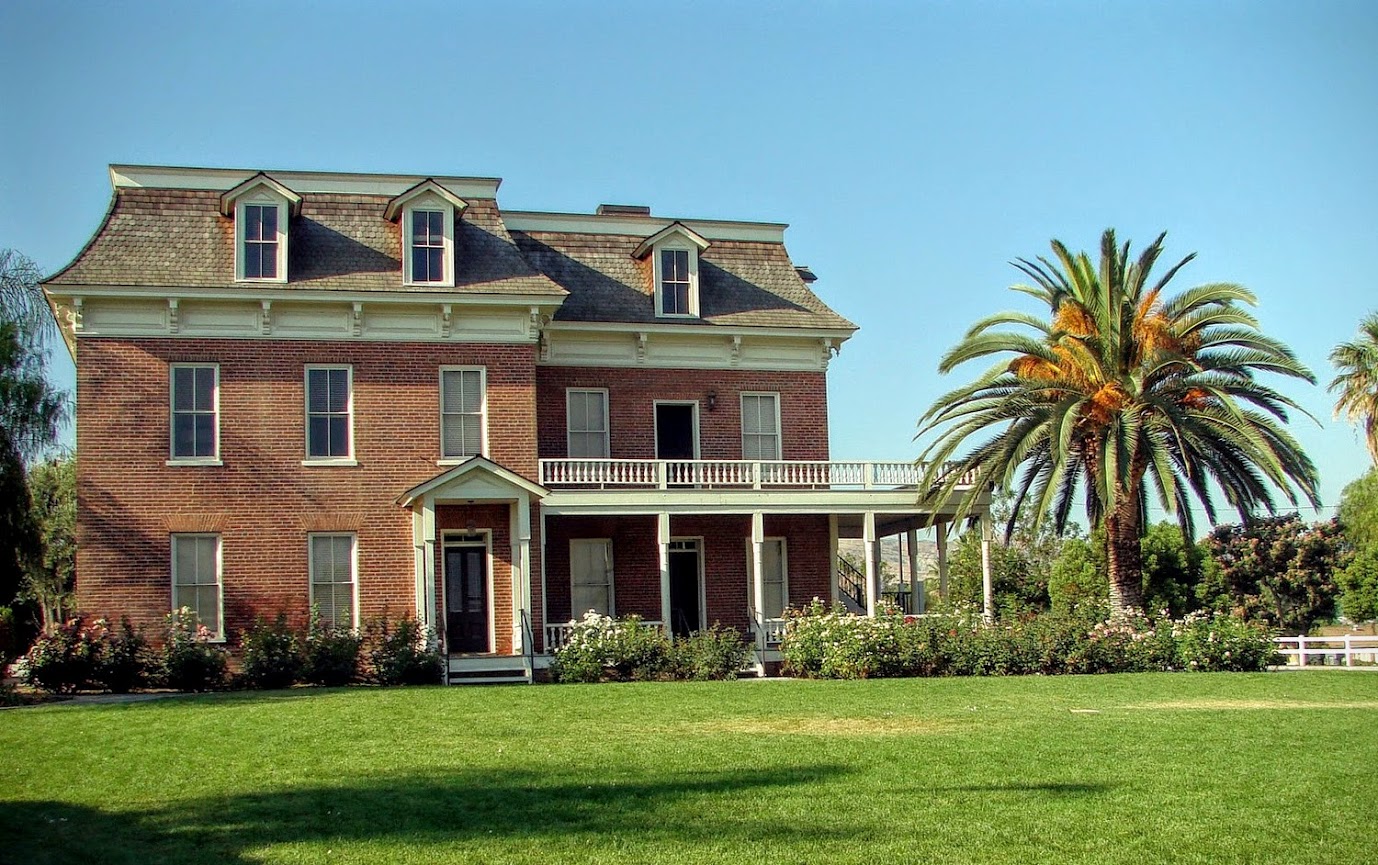 Other great buildings include the A. K. Smiley Public Library. Built by philanthropist Albert K. Smiley in 1898, it includes a variety of architectural styles. The tile roof and parapets atop its side arcades are Mission Revival-influenced, whereas the battlement and curves in the parapet are of a Moorish design. Still more styles are evident in the arcade’s arches, the windows, and the roof ridge, which have classical, Gothic, Spanish Romanesque, and Oriental elements. 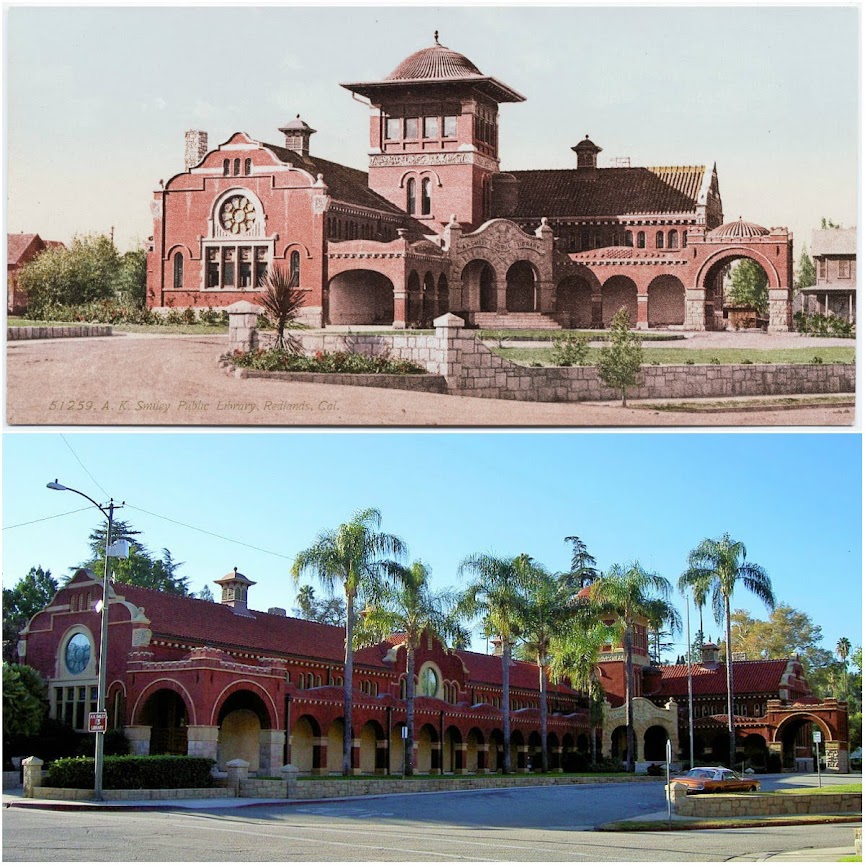 Another great building is the Redlands train station, designed in 1909 by architect Arthur Brown, Jr., who designed many of San Francisco’s prominent buildings such as the City Hall, War Memorial Opera House and Coit Tower.

With pristine neighborhoods and dramatic mountain backdrops, the Santa Fe Railroad operated excursion trains along a route through the Redland orange groves, across the Santa Ana River, and back into San Bernardino, advertising it as the “Kite Route” due to its shape. 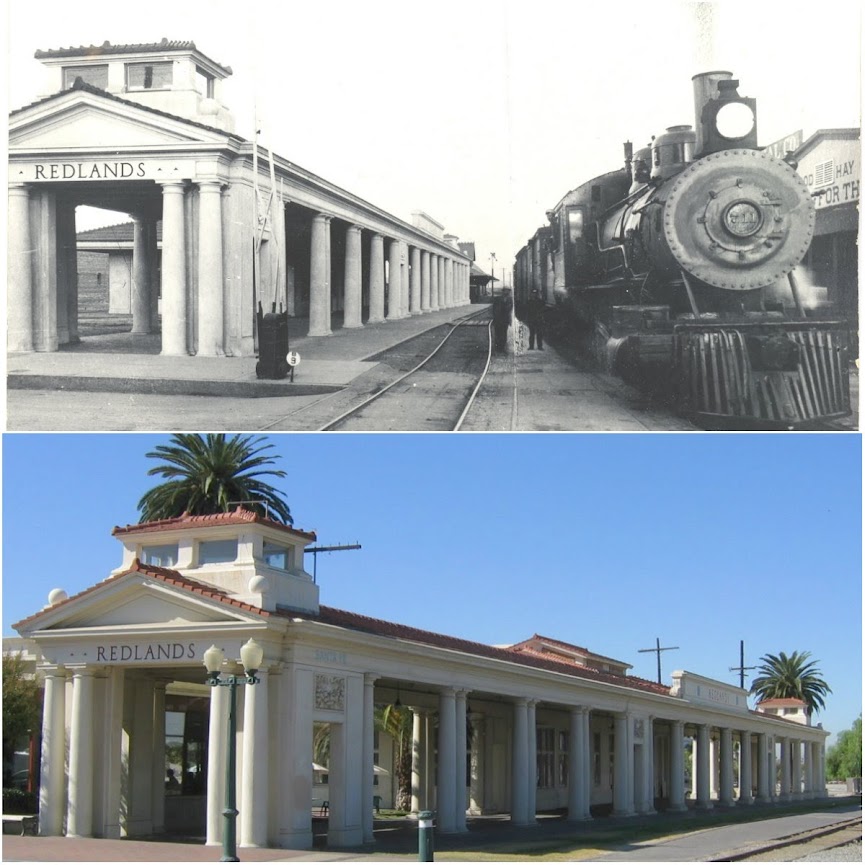 Fine building continues to this day, mostly of the residential variety. 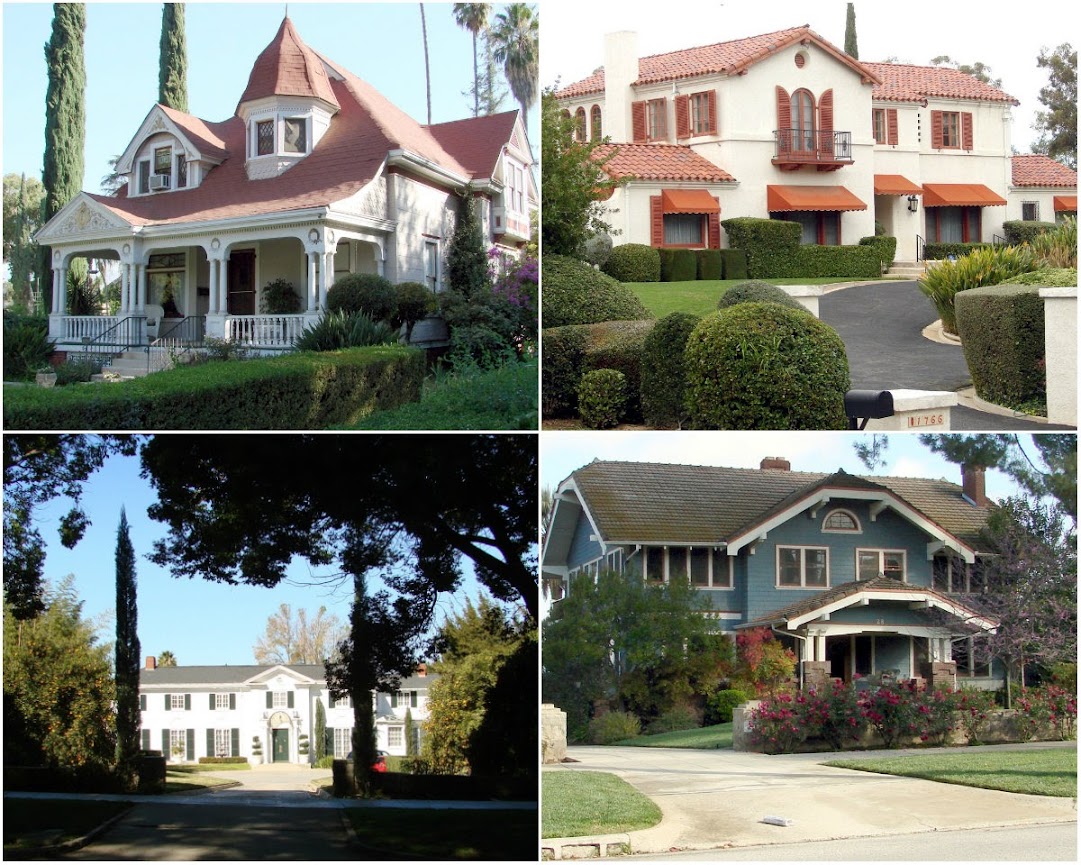