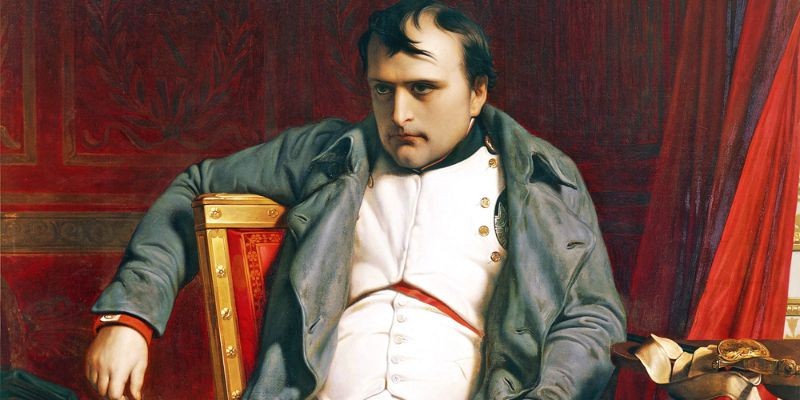 The two-masted brig Épervier sailed toward the Royal Navy’s Bellerophon with Napoleon aboard, preparing himself to officially surrender.

What must have been going through Napoleon’s mind at that moment?

No doubt he was still thinking about the outcome of Waterloo and how he could have won.

Two months later, on his way to St Helena, and exile, he would lament,

And a year later, he would say,

‘My regrets are not for myself but for unhappy France! With twenty thousand men less than I had we ought to have won the battle of Waterloo. But it was Fate that made me lose it.’ (2).

But such bitterness would have to wait. Right now, he needed to swallow his pride and try to appeal to the honor of British Admirals.

His choices were few. Either he could remain in France and risk becoming prisoner to the Bourbons, Prussians or Austrians. Or he could surrender to the British and try to request political asylum, and perhaps even passage to the United States. 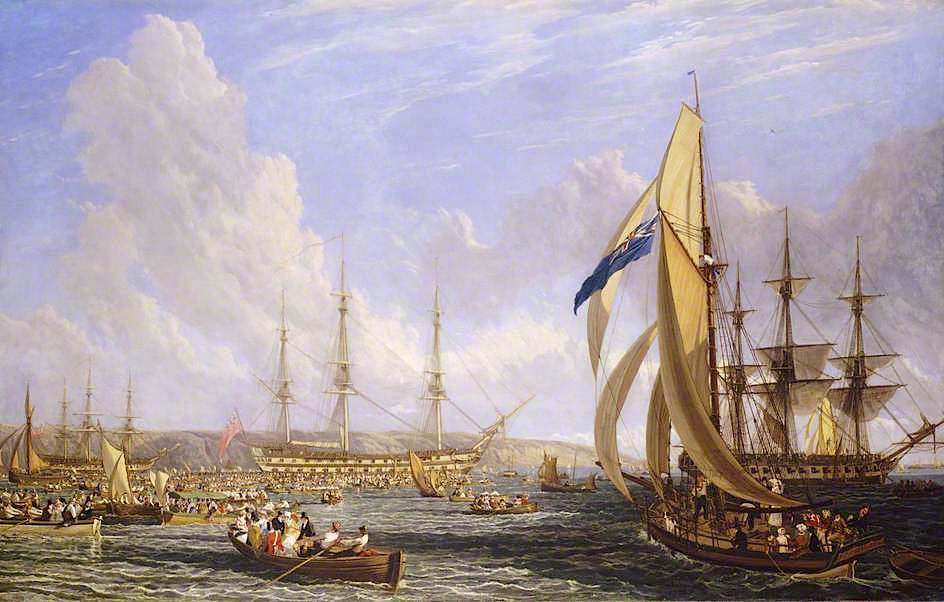 The ‘Bellerophon’ with Napoleon Aboard at Plymouth by John James Chalon – 1816.

At around 6:30 am, Napoleon pulled alongside Bellerophon. He had been transferred to Bellerophon’s own barge to hasten his arrival.

Napoleon walked to the quarterdeck as British marines came to attention, and, taking off his hat to Admiral Maitland, announced in French,

I am come to throw myself on the protection of your Prince and your laws.

What a moment this was. Here was the man who had brought Europe to its knees. The man who almost won again at Waterloo. The man who once assembled an invasion force against Britain.

In his private papers, Sir William Hotham, Admiral of the Red, recalls his impressions of Napoleon after meeting him for the first time.

Napoleon’s person I was very desirous of seeing, but on doing so, I was disappointed. His figure is bad, he is short with a large head, his hands and legs small, and his body so corpulent as to project very considerably, his coat made very plain, as you see it in most prints, and from being very short in the back it gives his figure a more ridiculous appearance than it has naturally.

His profile is good … but his full face is bad. His eyes are a light blue, heavy and totally contrary to what I had expected, his teeth are bad …

His face at one moment bears the stamp of good humour and again immediately changes to a dark, penetrating, thoughtful scowl denoting the character of the thought that excites it.

He speaks quick, and runs from one subject to another with great rapidity. His knowledge is extensive and very various, and he surprised me much by his remembrance of men of every character in England. 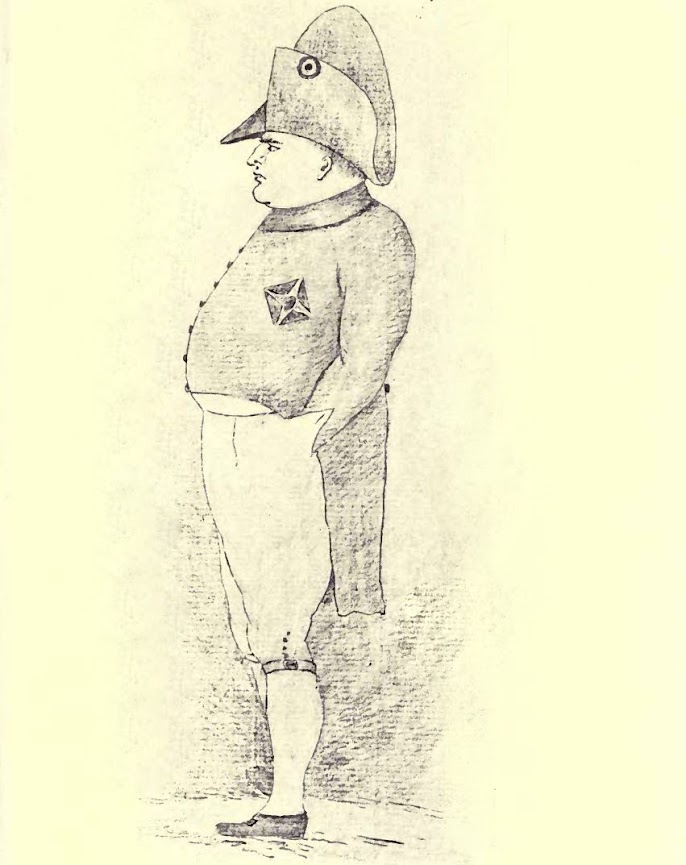 An original sketch of Napoleon as he would have looked that day, by Captain George Hotham.

Two days before, Napoleon had written a letter to the Prince Regent (later to become George IV)

Your Royal Highness,
A victim to the factions which distract my country, and to the enmity of the greatest powers of Europe, I have terminated my political career, and I come, like Themistocles, to throw myself upon the hospitality of the British people. I put myself under the protection of their laws; which I claim from your Royal Highness, as the most powerful, the most constant, and the most generous of my enemies.
—Napoleon.

On the day the Bellerophon departed the French coast for England, a midshipman wrote of Napoleon,

I shall never forget that morning we made Ushant (a small island off the cost of France). I saw the Emperor come out of the cabin at that early hour, and make for the poop-ladder.

He explained that Napoleon was restless and not able to sleep.

If a petty care can break our sleep, what must have been his feeling who had lost the fairest empire on the face of the globe.

The deck was wet and the midshipman offered Napoleon an arm to help him up onto the poop deck.

Napoleon pointed to the island … the last time he would see France and said, “Ushant, Cape Ushant”, to which the midshipman replied, ‘Yes, sire,” and left Napoleon alone.

And there Napoleon remained, looking longingly through his pocket-glass from morning to mid-day … not speaking a word. 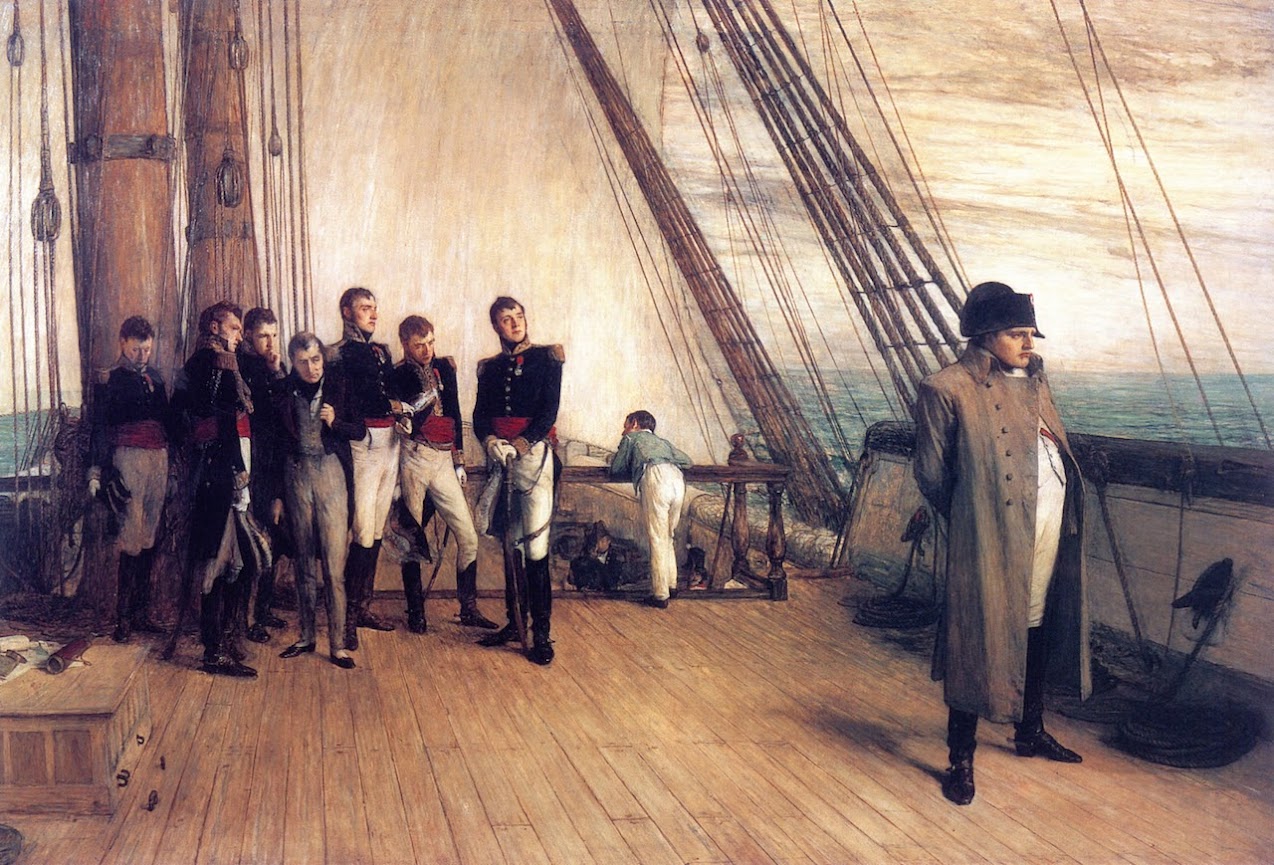 The Private Papers of Sir William Hotham, G.C.B. Admiral of the Red, by A. M. W. Stirling, Vol II.