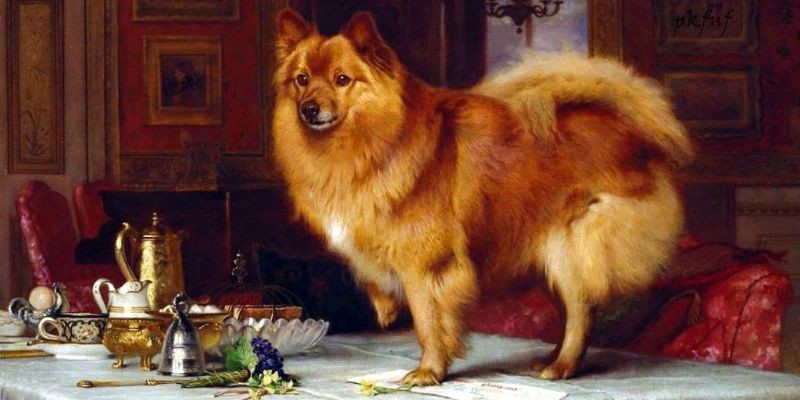 Queen Victoria was visiting Florence, Italy … and she fell in love.

She was swept off her feet by a beautiful male with auburn hair.

But this was no man, for no man could replace her dearest Albert.

The cute little nose and big intelligent eyes of the Volpino Italiano dog stole her heart.

She instantly fell in love, saying they reminded her of her grandmother, Queen Charlotte’s dogs, only these were much smaller.

The Volpino Italiano is a Spitz breed, which along with other Spitz-type dogs, are today generically referred to as Pomeranians—named for the Pomerania region in Central Europe which forms present-day northern Poland and eastern Germany.

The name Pomerania comes from Slavic po more, which means Land by the Sea. Most of the region is coastal lowland, but its southern, hilly parts are dotted with lakes and form the beautiful Pomeranian Lake District.

In Pomeranians, the Queen had found the new love of her life and introduced four new members to the Royal household—Marco, a 12-pound (5 kg) red sable named after the Italian merchant traveler Marco Polo, Gina, a white female, and two others.

Marco and Gina would both go on to win prizes in the show ring.

Queen Victoria had such a powerful influence on popular culture that Pomeranians soon became one of the most fashionable toy breeds—especially the smaller, red-coated ones like Marco.

Here is a description of the Pomeranian breed from the late Victorian Era:

They have a long, thick coat that seems to stand out from the body, a tail which curls tightly and lies close to the back, a foxy head, small, erect ears, rather short legs, short back, and a generally square and thick-set appearance, in spite of which, however, they are active as kittens.

The Toronto Daily Mail of 1894 ran an article on Queen Victoria’s dogs, describing Marco as an auburn dog with tawny red hair.

The Queen has her favorites among the dogs, and some of them become jealous of the attentions she pays to others.
Among those she likes best is one named “Marco.”
This is said to be the finest Spitz dog in England. It has taken a number of prizes.
He weighs just about twelve pounds and he has brighter eyes, quicker motion, and sharper bark than any other dog in the kennel. He is just three years old, and he carries his tail over his back as though he owned the whole establishment.

Queen Victoria had at one time 35 Pomeranians in the royal kennels.

In 1891, she showed six of the dogs at the opening of Cruft’s—now the world’s largest international dog show—their names were Fluffy, Nino, Mino, Beppo, Gilda and Lulu.

10 years later, on her dying day, the Queen requested that her beloved Pomeranian, Turi, be brought to her bedside.

At half-past six in the evening, Tuesday, 22 January 1901, at the age of 81, Queen Victoria died at Osbourne House, her faithful little white pomeranian, Turi, by her side to the last.

The Art of Reading in the Victorian Era