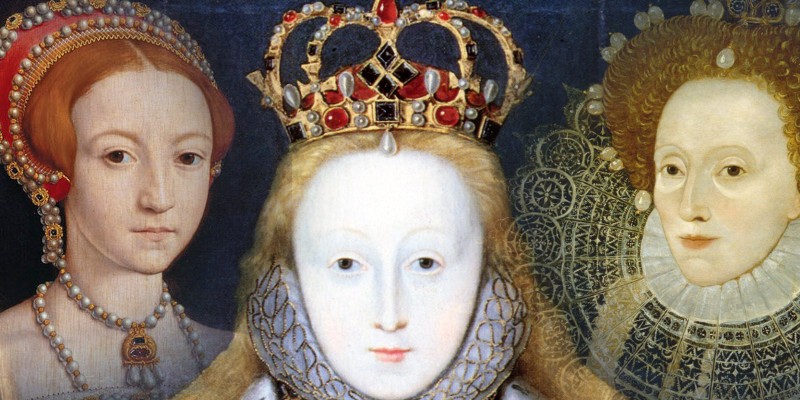 Owning paintings of the Queen was viewed as a status symbol. Robert Dudley, Earl of Leicester, displayed over 50 paintings at his Castle in Kenilworth, Warwickshire—a bold reminder to guests that he was the man closest to the Queen.

Although Elizabethan artists drew inspiration from the European Renaissance, it was Elizabeth herself who was the national preoccupation. Invoking her image in paintings and literature had the effect of elevating them to a higher level.

Today, we like to think of art as an expression of feelings and beliefs. But in Elizabethan England, flattery was the order of the day—a time when most artists needed wealthy sponsors to survive.

It was the patriotic duty of artists to glorify their queen. Gloriana!

Join us as we marvel at paintings from Queen Elizabeth’s life and discuss some of the symbolism used to project an image of purity, virginity, and majesty.

The ‘Hampden portrait’ (above) is the earliest full-length portrait of the queen, made before the emergence of symbolic portraits representing the iconography of the “Virgin Queen”.

The ‘Pelican’ and ‘Phoenix’ portraits (above) were named after the beautiful pendants worn by the queen (shown just above her hand in each painting).

The Pelican jewel denotes self-sacrifice since a pelican was thought to draw blood from its own breast to feed its young. It represents Elizabeth’s role as mother to the nation and of the Church of England.

The Phoenix is a mythical bird symbolizing rebirth and chastity—an emblem of virginity, carrying the hope that she would be able to continue the dynasty. Elizabeth holds a red rose—the symbol of the House of Tudor.

The Darnley Portrait (above) features symbols of sovereignty—a crown and sceptre—used as props instead of being worn or carried. This Tudor theme would be expanded upon in later portraiture.

Named after a previous owner, it is the source of the face pattern called “The Mask of Youth” which would be used for authorized portraits of Elizabeth for decades to come. The faded oranges and browns would have been crimson red in Elizabeth’s time.

The ‘Sieve Portrait’ (above) depicts Elizabeth as Tuccia, a Vestal Virgin who carried a sieve full of water from the Tiber to the Temple of Vesta to prove her chastity.

Around her are symbols of imperial power, including a column with the crown of the Holy Roman Empire at its base and a globe showing ships sailing west in search of the New World.

The Ermine Portrait (above) symbolizes purity and status. Legend has it that the ermine (of the stoat or weasel family) would rather die than soil its pure white coat—prized as a status symbol that only royalty and nobility could afford to wear. The olive branch and the sword of justice represent the righteousness and justice of Elizabeth’s government.

One of three versions of the same portrait, the Woburn Abbey version (above) is unusual in its landscape format. It depicts England’s victory over the Spanish Armada in the background.

Elizabeth has her back against the storm and darkness of the past, and her hand rests over the New World, signifying England’s expansionist plans for the future.

The Ditchley Portrait (above) was commissioned by Sir Henry Lee (1533 – 1611), of Ditchley, Oxfordshire, who was Queen’s Champion and Master of the Armoury.

After his wife died, Lee lived openly with one of the Queen’s Ladies in Waiting. Needless to say, the queen did not approve. But on a visit to his home in Ditchley, she forgave him—for becoming a “stranger lady’s thrall”.

The portrait is the largest and grandest ever painted of the queen. The symbolism shows just how eager Sir Henry must have been to show his loyalty and subservience.

Elizabeth stands on a globe directly over Oxfordshire as the sun (symbol of the monarch) shines through a stormy sky. The Latin inscriptions say: “she gives and does not expect”; “she can but does not take revenge”, and “in giving back she increases”.

The ‘Hardwick portrait” (above) is all about the dress—typical of extravagant and sometimes outlandish late-Elizabethan embroidery depicting an eclectic mix of motifs from nature. Roses, irises and pansies intermix with insects, animals and fish. The lace ruff alone is a masterpiece.

It is thought that the dress was a New Year’s Day gift to the Queen from Bess of Hardwick—one of the most influential of Elizabeth’s courtiers who became England’s most powerful woman after the Queen died.

The ‘Rainbow portrait’ (above) was painted near the end of Elizabeth’s life—she was in her late sixties. It represents an ageless queen and is full of allegorical symbols. The cloak with eyes, ears and mouths has been given many interpretations by historians and is a fitting symbol to end our journey with.

The eyes of the world were upon Elizabeth; people listened to Elizabeth, and people spoke of her the world over.

Elizabeth carries a rainbow, next to which are the words non sine sol iris—”no rainbow without the sun”.