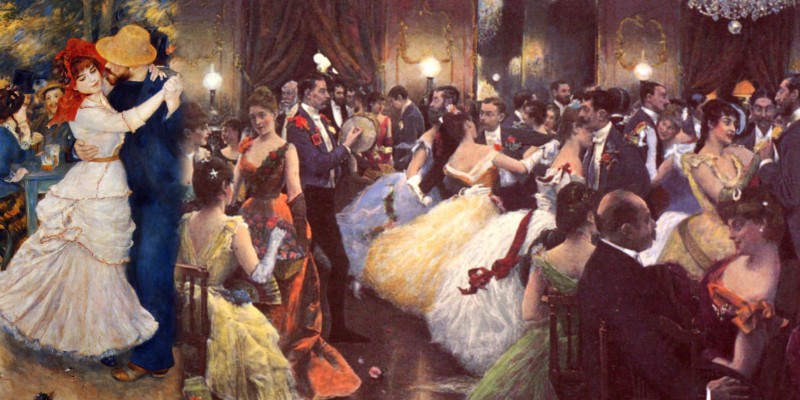 The word “Ballroom” is derived from the word ball, which in turn originates from the Latin word ballare, meaning ‘to dance’.

From the late 19th century until the early 1960s, the dance hall was the popular forerunner of the discothèque or nightclub.

Sometimes you had to start small …

Financed by Henry Ford, the dance hall at Boblo Island Amusement Park in Amherstburg, Ontario, Canada was the largest in North America at the time of its completion in 1913.

Designed by Detroit architect Albert Khan, and constructed of steel and stone, the east side of the building featured a tall cathedral-like glass wall.

Holding 5,000 dancers at full capacity, it featured one of the world’s largest “orchestrions” from the Welte company—a self-playing orchestra 16 ft tall and 14 ft wide, with 419 pipes and percussion section.

By the 1940’s, most towns and cities in the United States had at least one dance hall, with live musicians playing a range of music from strict ballroom to big band, swing and jazz. Glenn Miller was one of the most famous dance hall musicians of the period.

In Britain during the late Victorian period, dance halls for the general populace were still referred to as ballrooms.

Tower Ballroom at Blackpool, in the north-west county of Lancashire, was one of the most famous ballrooms of the late 19th century and is still in use today.

Its 120 ft by 120 ft dance floor is made up of 30,602 blocks of mahogany, oak and walnut. Above the stage is an inscription from the poem Venus and Adonis by William Shakespeare,

Bid me discourse, I will enchant thine ear.

After World War 2, it was time to start having fun again. British couples cautiously transitioned from traditional ballroom to more adventurous forms of dancing like Jive.

In North America, Square Dancing became ever more popular. Brought over with European settlers, it traditionally involved four couples (eight dancers) arranged in a square, with one couple on each side, facing the middle of the square.

From the grandest of the grand ballrooms to the humble town dance hall, we all love to dance, don’t we?

We’re going to journey back to the Victorian era again, and imagine that we’re working-class folk living in Paris who can’t go to a really posh ball. We make do with Sunday afternoons at Moulin de la Galette in the Montmartre district, where we dress up and enjoy dancing, drinking, and eating galettes into the evening.

When we get home though, we can dance into the night inside our imagination … with a little help from our new toy from England—the phenakistoscope.

This was an early animation device that uses a spinning disc attached to a handle. Arrayed around the disc’s center is a series of drawings, and cut through it are equally spaced radial slits.

When we spin the disc and look through the moving slits into a mirror, we’re magically transported back to the dancehall …

Press play and dance the night away …

6 Boston Landmarks – Then and Now