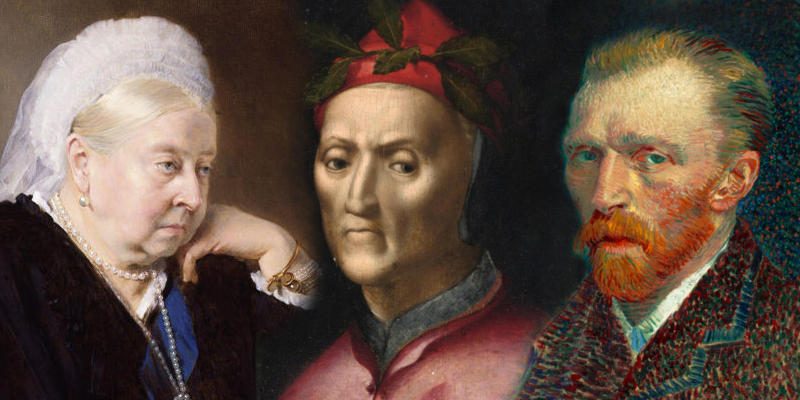 Feeling down in the dumps? Got a case of the Mondays?

Take solace in these melancholy moments from history.

Every man has his secret sorrows which the world knows not; and often times we call a man cold when he is only sad.Henry Wadsworth Longfellow

Considered to have written the most important poem of the Middle Ages and the greatest literary work in the Italian language, at first glance, it may seem like a complete mystery why Dante would be pictured as grossly miserable in most portraits.

But not many people get to see Hell as vividly as Dante.

Paradoxically called the “Divine Comedy”, the poem is a narrative of Dante’s travels through Hell, followed by a stay in Purgatory to endure some further suffering and torment before, at last, reaching the Paradise of Heaven.

“Comedy” in the classical sense meant a Providential will that ordered the universe; thus the pilgrimage from Hell to Heaven is the archetypal expression of “comedy”.

When he was just nine years old, Dante fell in love.

That same year, his mother died.

And his love would go unrequited because he was promised in marriage to the daughter of a powerful Florentine family at age 12.

Channeling his emotional pain into poetry, he depicted his lost love, Beatrice, as semi-divine, watching over him constantly and providing spiritual instruction.

This theme would recur in the Divine Comedy as Dante is guided by the Roman poet Virgil through Hell and Purgatory, and then by Beatrice herself, who guides him through Heaven—one of the few times Dante looks the least bit happy.

Influencing many parts of the Comedy was Dante’s bitterness at being exiled from his beloved Florence simply for being on the wrong side of the ideological war between the Papacy and the Holy Roman Empire.

Still, with the eternal damnation to which he condemned his opponents in the Divine Comedy, perhaps Dante had the last laugh.

Serving as the seventh President of the United States from 1829 to 1837, Andrew Jackson is best remembered for his triumphal victory over the British at the Battle of New Orleans in the War of 1812 .

Lauded as an American hero, one may be forgiven for wondering why Andrew Jackson looks so sad in many portraits.

But there is a darker side to his past.

Prospering as a cotton planter, Jackson may have owned as many as 300 slaves throughout his lifetime.

Permitting slaves to be whipped to increase productivity, his sweeping plantation, the Hermitage in Tennessee, grew to 1,050 acres, while slaves lived in 20 sq ft cabins.

In 1838, as many as 4,000 Cherokees died on the “Trail of Tears”—Andrew Jackson’s forced removal of Native American nations from their ancestral homelands in the Southeastern United States to designated territory west of the Mississippi River.

Maybe Jackson felt remorse over some of these actions.

But his own life had not been easy by any means.

At the age of 14, he was captured by the British during the Revolutionary War, along with his brother.

When he refused to clean the boots of a British officer, the officer slashed at him with a sword, leaving scars on his left hand and head.

While held prisoner, the two brothers contracted smallpox and nearly starved to death.

Securing their release, his mother walked them home, but his brother died along the way.

Volunteering to help prisoners of war recover from cholera, his mother died after contracting the disease and was buried in an unmarked grave.

Later in Jackson’s traumatic life, he dueled with American lawyer Charles Dickinson and was struck in the chest near his heart.

Remaining lodged in his lung, the bullet would never be removed and caused a hacking cough that often brought up blood, sometimes making his whole body shake.

Jackson got his revenge by shooting the man stone cold dead, but chronic headaches and abdominal pains plagued him for the rest of his life.

Observers likened him to a volcano, and only the most intrepid or recklessly curious cared to see it erupt.Biographer H. W. Brands

Rising to prominence during the French Revolution, Napoleon went on to dominate Europe and global affairs as Emperor of the French.

Celebrated as one of the greatest commanders in history, what could possibly cause him to look so down in the dumps?

Winning was everything to Napoleon.

Death is nothing, but to live defeated and inglorious is to die daily.Napoleon Bonaparte

Early signs of Napoleon’s sadness are revealed in an oft-cited letter of 1795 to his brother Joseph, revealing that he felt “little attached to life”, finding himself as though “constantly on the eve of battle.”

He despaired that he would end up “by not moving aside when a carriage goes by”.

His incapacity for pleasure, his all-pervading sadness, his suicidal thoughts, his despair of finding his place in the world were, to some extent, a part of the Romantic era of Byron and Shelley.

But finding action in the field of battle would be all the medicine Napoleon needed.

As long as he was moving forward, taking action, strategizing, he was in his element.

Nothing could stop him.

Even the failed invasion of Russia in 1812 was just a setback to Napoleon.

But after Waterloo, everything changed.

Exiled on Saint Helena, 1,162 miles from the west coast of Africa, Napoleon fell into deep depression and ill health.

Describing St Helena as “this accursed”, “frightful”, “vile”, and “miserable” rock, Napoleon suffered from nervous headaches, a shooting pain in his shoulder blade and down his right side, stomach pains, swollen cheeks and ankles, and bleeding gums.

Talking of suicide by charcoal fumes, he wrote, “death is nothing but a sleep without dreams”.

But he really died six years earlier when he stepped foot on St Helena and no longer had control over an army.

Napoleon had lost his purpose in life.

Known as the “the grandmother of Europe”, her nine children married into European royalty and nobility, giving her 42 grandchildren.

Queen Victoria reigned for 63 years and seven months—longer than any of her predecessors.

Marked by industrial, cultural, political, and scientific advancement, one could be forgiven for wondering what on earth could make the Queen so miserable?

In a word, Albert.

Not that there was anything wrong with her husband Albert, Prince of Saxe-Coburg and Gotha, quite the opposite.

After 21 years of blissful married life, Albert contracted cholera and died an early death, plunging her into a deep depression.

She wrote to her daughter in Germany,

How I, who leant on him for all and everything—without whom I did nothing, moved not a finger, arranged not a print or photograph, didn’t put on a gown or bonnet if he didn’t approve it shall go on, to live, to move, to help myself in difficult moments?Queen Victoria

Victorian-era widows were expected to wear black for the mourning period of up to four years.

Women who mourned in black for longer periods were accorded great respect in public for their devotion to the departed.

Finding solace in unexpected places is a part of the grieving process.

Queen Victoria developed a curious relationship with John Brown, a Scottish horse attendant in her household.

Proud of his heritage, his brusque manner was the bane of her ministers and family.

But she adored him.

Struggling with poverty and mental illness for most of his life, Van Gogh is perhaps the most famous tortured artist of all time.

Considered a madman and a failure, his fame grew only after his suicide, with several paintings he couldn’t sell now worth over $100 million each.

No wonder he looked miserable in his numerous self-portraits.

Quiet and thoughtful as a child, Van Gogh first began to feel depressed when he moved to London as a young art dealer.

Turning to religion and spending some time as a missionary in Belgium, he drifted into ill health and solitude.

Moving back with his parents in the Netherlands, he took up painting.

But as his talent grew, there was only one place to be for an aspiring artist in the late 19th century—Paris.

Falling in with the avant-garde, he became friends with Paul Gauguin and painted some of his best-loved scenes of Montmartre.

But delusional episodes, poor health, and heavy drinking led to a confrontation with Gauguin that ended their friendship and cost Van Gogh an ear.

Brandishing a cut-throat razor at Gauguin and later cutting off part of his own ear was enough to see him institutionalized.

When you paint your own doctor in a way that suggests he was either deeply depressed himself or powerless to help you, then you know things are pretty dire.

But look on the bright side—it’s possible that our minds are at their most creative when we’re at least a little sad.

A Brief History of Christmas Markets