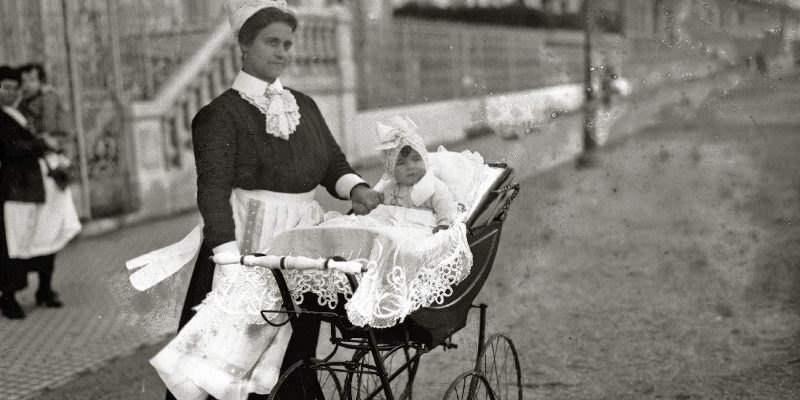 The year was 1847 and Queen Victoria was pregnant with her 6th child, Princess Louise.

Hearing about a new type of baby carriage with three wheels which was pushed from behind, she couldn’t wait to see one.

“Albert!” she hollered, “come along, we’re off to the city to buy a pram”.

“Yes, yes, it’s a new type of carriage for our babies—you’ll love it!”

“Yes, of course!” exclaimed the queen. “You know how you love inventions—well, this is one where the babies sit and you push”.

“I see”, said Albert, realizing what was coming … Prams or perambulators date back to around 1733 when the Duke of Devonshire asked English architect and furniture designer William Kent to make a carriage for his children to keep them amused while they played in the grounds of Chatsworth House.

Equipped with a harness for a goat or small pony, Kent’s shell-shaped basket-on-wheels even had springs so that children could ride in comfort.

Riding in goat-powered carts wasn’t new—children had been enjoying that since the early 17th century.

And it was still fashionable by 1890, as the grandchildren of the 23rd President of the United States, Benjamin Harrison, would attest.

But what Kent’s design did was to inspire an entire industry of baby carriage manufacture during the Victorian era.

Starting out as three-wheeled versions that were typically pulled along by a Nanny, a later innovation allowed prams to be pushed, making it easier to keep an eye on the baby’s welfare.

Arriving from France, the wickerwork “Bassinet” style of pram allowed the infant to lie flat within a basket on a wheeled frame.

Royal patronage helped launch a fashionable craze among the well-heeled all over Europe and the United States.

So popular were prams in London by 1855 that the Rev. Benjamin Armstrong from rural Norfolk noted in his diary:

The streets are full of perambulators, a baby carriage quite new to me, whereby children are propelled by the nurse pushing instead of pulling the carriage.

Built of wood or wicker and held together with expensive brass joints, baby carriages were sometimes heavily ornamented works of art.

Patents for new innovations were registered on both sides of the Atlantic.

In 1899, African American William H. Richardson patented a design for a reversible baby carriage, allowing the baby to face either forward or toward the person pushing the carriage.

By the late Victorian era, many more people could afford a baby carriage and new coach-built luxury models came onto the market named after royalty—Princess and Duchess being popular names, as well as Balmoral and Windsor.

The Edwardians made perambulator design a fine art with elaborate decoration, improved maneuverability, rubber tyres, and protection from the elements.

And of course, babies were the big beneficiaries of all this innovation. Peekaboo!

It was definitely a baby’s world—even royal babies loved their pram rides to the park.

With a commanding position to see all the sites and a comfortable ride with someone else doing all the work, what’s not to love?

Waiting on them hand and foot, some siblings would go to great lengths to ensure the baby was as comfortable as possible.

For the wealthier families, it was the Nanny’s responsibility to look after the children while the parents attended the many parties and functions on their busy social calendars.

Mothers who couldn’t afford or didn’t want a nanny could spend some quality time with their baby dressing them for an enjoyable pram outing.

Admiring glances and polite conversation from passers-by would be all part of the fun of owning a perambulator.

Top down, wind in the hair. Nothing quite like it.

Even fathers started to take an interest, but generally only those working in zoos.

With the arrival of the 1920s, new technology provided a way of helping to keep babies quiet—namely Radio.

And for the first time, babies in prams became movie stars.

Along came the 1930s and prams took on some design cues from automobiles, with shiny fenders, sports wheels, and even windows.

We’re only human and so you never know when we’ll be at war again. Best to be prepared with a gas-proof pram.

Fasten your seatbelts for the 1950s!

“Mom, I think we left them for dust.”

Companies like A & F Saward and Silver Cross started building custom-made prams in the 1950s that were—and still are—the choice of British royalty.