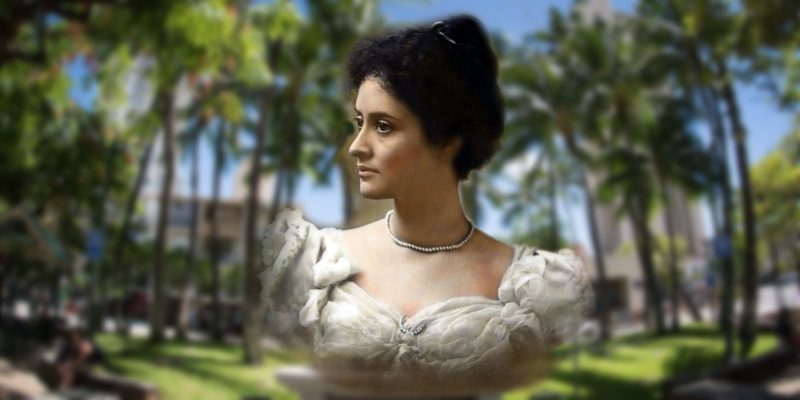 Born Victoria Ka’iulani on October 16, 1875, the Crown Princess and heir to the throne of the Kingdom of Hawaii was known throughout the world for her intelligence and determination to preserve the Hawaiian monarchy.

Named after Queen Victoria and her maternal aunt Anna Ka’iulani who died young, Princess Ka’iulani’s life, spirit, and legacy are a testament to her love of the Hawaiian people in their hour of need.

Ka ‘iu lani means “the highest point of heaven” or “the royal sacred one” in the Hawaiian language.

Descended from the first cousin of Kamehameha the Great, the founder and first ruler of the Kingdom of Hawaii, Ka’iulani’s mother was known as Likelike, the sister of the last two ruling monarchs, and her father was Scottish businessman Archibald Scott Cleghorn.

A marriage across cultures does not always run smoothly and Princess Ka’iulani’s parents struggled.

Expecting to be the master of the household, Cleghorn’s staunch Victorian male chauvinism clashed with the Hawaiian nobility’s belief, regardless of gender, that they should be the ones to rule over others.

You always blame me in everything and I am getting tired of it. I will have to kill myself then you won’t have me to growl at all the time. I think we are better separated…as you don’t love me and I don’t love you so I will simply say, “God bless the good”Likelike

Imperious and quick-tempered, but vivacious and well-liked, Likelike earned a reputation as a kind, gracious hostess.

It is said that a large school of bright red fish—an omen of death in her family—massed close to shore and that Likelike predicted her daughter would never marry and never become Queen.

Because Princess Ka’iulani was second in line to the throne after her elderly and childless aunt, the young girl was expected to eventually become Queen.

The reigning monarchs, King Kalākaua and Queen Kapi’olani, talked with Cleghorn and the Princess about preparing her for the role with a British education.

Sent to Northamptonshire, England in 1889 at the age of 13, Ka’iulani was given a private education at Great Harrowden Hall.

Excelling in her studies of Latin, Literature, Mathematics, and History, she also took classes in French and German and lessons in tennis and cricket.

Growing up knowing the landscape painter Joseph Dwight Strong from her uncle’s court, and Isobel Strong, a lady in waiting under her mother, she showed an early talent for art and took several trips to Scotland and France to study.

The two became good friends and he called her “the island rose” in a poem he wrote in her autograph book.

Moving to Brighton in 1892, it felt like a fresh start for Princess Ka’iulani who continued to study in England for the next four years, despite being told she would only be there for one.

Chaperoned and tutored by a Mrs. Rooke who set up a curriculum including German, French and English, the resort by the sea pleased the princess, renewing her enthusiasm.

Arranging for her to have an audience with Queen Victoria as part of a trip around Europe, her Hawaiin overseers had to suddenly cancel all plans in January of 1893.

In a short telegram, she learned that Hawaii had been overthrown.

Refusing to stand idly by while the home that she loved was swept from under her, she gave a statement to the English press:

Four years ago, at the request of Mr. Thurston, then a Hawaiian Cabinet Minister, I was sent away to England to be educated privately and fitted to the position which by the constitution of Hawaii I was to inherit. For all these years, I have patiently and in exile striven to fit myself for my return this year to my native country. I am now told that Mr. Thurston will be in Washington asking you to take away my flag and my throne. No one tells me even this officially. Have I done anything wrong that this wrong should be done to me and my people? I am coming to Washington to plead for my throne, my nation and my flag. Will not the great American people hear me?

Traveling to the United States to fight against what she saw as a terrible injustice, she gave this speech on her arrival:

Seventy years ago, Christian America sent over Christian men and women to give religion and civilization to Hawaii. Today, three of the sons of those missionaries are at your capitol asking you to undo their father’s work. Who sent them? Who gave them the authority to break the Constitution which they swore they would uphold? Today, I, a poor weak girl with not one of my people with me and all these ‘Hawaiian’ statesmen against me, have strength to stand up for the rights of my people. Even now I can hear their wail in my heart and it gives me strength and courage and I am strong – strong in the faith of God, strong in the knowledge that I am right, strong in the strength of seventy million people who in this free land will hear my cry and will refuse to let their flag cover dishonor to mine!

Despite pleas to U.S. President Grover Cleveland, who brought her plight before Congress, her efforts could not prevent eventual annexation.

Treating Ka’iulani with contempt, the pro-annexation press referred to her in print as a half-breed, calling her “dusky”, although she was saved from the blatantly racist treatment repeatedly given her Aunt, the Queen of Hawaii.

Typical of the time, “positive” accounts of the Princess’ appearance often tried to emphasize what was thought to be “white” about her.

Occasionally, the British half from her father, Archibald Cleghorn, was also disparaged by American writers fearing Great Britain was a rival for possession of Hawaii.

Returning to Europe to finish her education, she received further tragic news that her childhood friend, Robert Louis Stevenson had died and that a new Republic of Hawaii had been established in her absence.

Learning that her half-sister, Annie Cleghorn, and later her English guardian, Theophilus Harris Davies, had both died, a great sadness overwhelmed her and her health started to decline.

Arriving back in Hawaii in 1897, she thought the warmer climate would help her recover, but she continued to deteriorate.

Even the new house her father had built for her couldn’t lift her spirits as she struggled to readjust to the tropical climate of the Hawaiian islands.

Continuing to make public appearances at the urging of her father, she became visibly drawn and emotionally exhausted.

At least there was something to look forward to—the announcement of her engagement to Prince David Kawānanakoa of Hawaii.

The day Hawaii was annexed as a territory of the United States on August 12, 1898, citizen Ka’iulani and her aunt, the last monarch of the Kingdom of Hawaii, wore funeral attire to protest what they considered an illegal transaction.

One of the last public appearances of Victoria Ka’iulani was at a party thrown for U.S. Annexation Commissioners the following October.

Riding in the mountains of Hawaii Island in late 1898, Ka’iulani was caught in a storm and came down with a fever and pneumonia.

Just as her mother had foretold, Ka’iulani wouldn’t get married and would never become Queen.

Growing up enjoying the company of a flock originally belonging to her mother, she is sometimes called the “Peacock Princess”.