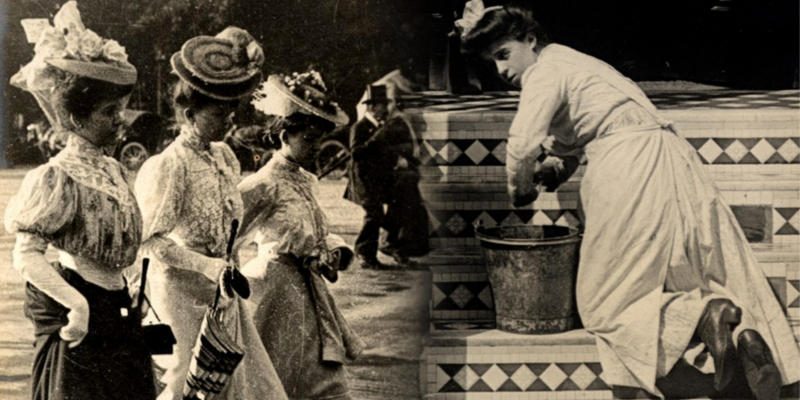 Kensington and Chelsea Libraries in London, England, uncovered a series of images suggesting that the Edwardians might have been the world’s first photobloggers.

Amateur photographer Edward Linley Sambourne (1844 – 1910) was the chief cartoonist for the British satirical magazine “Punch” which was first published in 1841.

He captured a slice of Edwardian life in these amazing candid photographs.

Young women walking to work in London; ladies and families strolling the boulevards of Paris; couples crossing the English Channel on steamships; friends enjoying the beaches of Kent and Ostende; and housemaids hard at work cleaning the steps to plush city townhomes.

Continuing the long, elegant lines of the late Victorian period, the Edwardian era was a time of transition in women’s fashion.

It would be the last time women would wear corsets in everyday life.

And as these images show, women were enjoying a new level of freedom from the rigid conventions of heavy ankle-length Victorian gowns and bustles.

Women’s fashion would never look back.

for, however far politicians were to put the clocks back in other steeples in the years after the war, no one ever put the lost inches back on the hems of women’s skirts.
Read more ...

Sambourne’s hobby gave us glimpses into a past that looks oddly familiar.

What is this woman thinking as she walks to work?

She had similar worries to most of us today—a to-do list as long as your arm, what to make for dinner, helping her little sister with her homework, whether to accept the advances of a work colleague who seemed like a true gentleman …

Apart from her hat, the practicality and style of her clothing wouldn’t change much for decades to come.

We thought the Internet generation was the first to truly embrace mobile multi-tasking.

Glued to a book on the walk to work in London, this woman reminds us of how glued we are to our mobile device screens today.

No need to look where we’re going—other people will simply adapt and move around us.

As long as we don’t walk into a lamppost, we’re good to go.

Big hats with giant bows and cycling may not go together well today, but Edwardians made it work.

Cycling was in vogue as the way to get around, but to be without one’s hat was sacrilegious.

But it looks like this woman has an inkling that something is going on.

Few things in the Edwardian era were worse than being out-hatted.

One had to keep a close eye on the competition.

Edwardians too had to suffer the inescapable feeling of incredulity at the various scandals of politicians and celebrities.

Imagine this woman is checking her iPhone.

At last! Some willing portrait subjects.

And just look at those smiles—almost unheard of in more formal portraiture.

Can you see the freedom of movement in the clothing that allows these women to put their best foot forward?

Having a good sense of balance was important for wearing Edwardian hats.

Whistle while you walk to school with Mother.

A charming picture of a happy moment in time, captured forever.

Perhaps for the first time in history, Edwardian women were free to project confidence and begin determining their own future.

We move to Paris.

Higher hemlines were a feature of Edwardian skirts that afforded women greater freedom of movement, but at least one of these ladies prefers to lift her skirt to clear the puddles just in case.

What could be more perfect than an afternoon stroll around the Tuileries Garden?

Black mourning dress worn for months or years was a convention carried over from the Victorian era and still widely practiced.

Notice the wheels on the horse-drawn cab.

Inspired by the wheels of bicycles?

These were interesting times—a transition from horses to automobiles was underway.

Time to see and be seen at the Place du Louvres.

This lady is aboard a steamer—a ship propelled by steam—crossing the English Channel to visit Ostende in Belgium.

Invented by Victorians, the steamship enabled the upper classes to see the world and as prices fell, the middle class were able to enjoy the occasional weekend getaway.

Looks like this woman found a nice spot on the ship that was sheltered from the wind.

Hitting the beach in Edwardian times was a very formal affair.

Getting a tan was still many decades away from becoming a fashionable or even desirous thing.

Hidden from gazing eyes, this woman enters a Victorian bathing machine to change out of her modesty.

Hats and coats against the wind.

No weather could prevent one wearing one’s hat.

Hold onto your hats, ladies!

How do we get rid of that pesky photographer, Mr Sambourne?

How about we ask him to fetch a bucket of water and a brush and help us clean the steps!

Thought that would do the trick.

Bye bye Mr Sambourne, and thank you for this incredible journey into the Edwardian era.