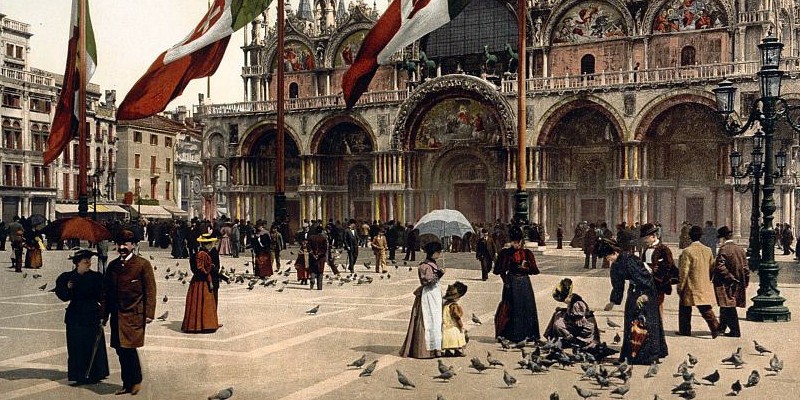 “Queen of the Adriatic”, “City of Bridges”, “City of Canals”—whatever you call this beautiful city, you can be sure to find romance, for the name Venice is derived from the Indo-European root wen- meaning “love”.

Fleeing waves of Germanic and Hun invasions in the 5th century, refugees from the surrounding countryside sought sanctuary on a series of islands in a marshy lagoon between the Piave and Po Rivers.

Contains affiliate links A Day in Venice by Fivos Valachis

Venice developed into a city state, that by the late 13th century, was the most prosperous in Europe.

With a strategic position at the head of the Adriatic Sea, Venice dominated Mediterranean trade with a fleet of 3,300 ships.

The wealthiest families vied with each other to build the grandest palaces and sponsor the greatest artists.

But by the 15th century, a great darkness fell upon the city.

Devastated by plague and war with the Ottoman Empire, Venice went into a long period of decline.

As new trade routes across the great oceans were discovered, Venice lost its position as the center for international commerce.

Ill-suited to ocean-going travel, Venice’s fleet of oared galleys couldn’t compete with the sailing ships of Portugal, France, England and the Netherlands.

By the 18th century, Venice was seen in a new light. It was considered the most elegant city in Europe—influencing art, architecture and literature.

And by the Victorian Era, a new form of transportation—the steam ship—brought travelers from far and wide to gaze upon its beauty.

Related post: Steam Travel – How Steamships and Railways Opened Up the World to Victorians.

Driven through soft layers of sand and mud, the piles reach a much harder layer of compressed clay.

Submerged by water, wood does not decay as rapidly as on land, and most piles are still intact centuries later.

Tea Drinking in the Civil War