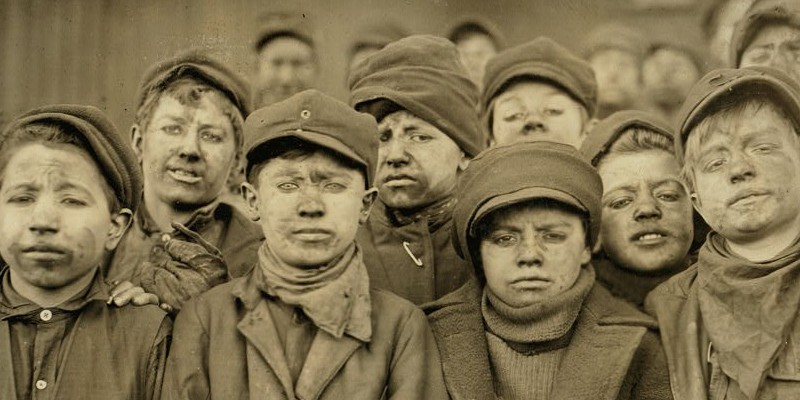 During the early decades of the twentieth century, child labor reached a peak in the United States.

Social activism and political reform were sweeping across the country, and many states enacted laws to improve the conditions under which people lived and worked.

Contains affiliate links The Art of the Piano by Fabrizio Paterlini.

When asked how old, she hesitated, then said “I don’t remember.” Then confidentially, “I’m not old enough to work, but I do just the same.”

The National Child Labor Committee (NCLC) was formed in 1904 to promote “the rights, awareness, dignity, well-being and education of children and youth as they relate to work and working.”

But children were being exploited for cheap labor in secret, hidden from public view. So in 1908, the NCLC hired Lewis Hine as an “investigative photographer” to document working and living conditions of children across the United States.

Hine would gain access to factories under assumed identities—one day a bible salesman, another day a fire inspector, a postcard vendor, or even an industrial photographer saying he was making a record of machinery.

Undeterred by threats of violence and even death by factory police and foremen, if he couldn’t get inside a building, he would wait outside and photograph the children in groups as they entered or left.

His photographs were instrumental in changing the child labor laws in the US.

We can all relate to the plight of this little girl who stares longingly out of the window of a cotton mill, watching the childhood she should’ve had slip away.

Reminiscent of a scene from Stanley Kubrick’s film The Shining, the little girl below probably thinks she’s done something wrong and can’t understand why Lewis Hine is asking her to stand still while pointing the camera at her.

… after I took the photo, the overseer came up and said in an apologetic tone that was pathetic, “She just happened in.” Then a moment later he repeated the information. The mills appear to be full of youngsters that “just happened in,” or ” are helping sister.”

We can probably all remember our grandparents saying “kids today don’t know they’re born”—we’ll probably say the same thing because each generation thinks they had it tougher than the current one.

But the young lads below really did have it tough. They worked the night shift from 5 pm to 3 am along with thousands of other children in the dangerous glass making industry.

Paid by the piece, they had to work as fast as they could for hours without a break. Many factory owners preferred boys under 16 years of age.

Eight-year-old Leo worked in a cotton mill and picked up bobbins for 15c a day. Already feeling the responsibility of contributing like the grown-ups, he said he didn’t do it just to help his sister or mother, but for himself.

Breaker boys worked in the coal mining industry. Their job was to separate impurities from coal by hand. It was midday when this photo was taken, and already the lads are covered from head to toe in coal dust.

A couple of the lads below muster a smile, while others are probably just relieved to get a few minutes respite.

Three-quarters of all child laborers worked in agriculture. Many of them were children of sharecroppers or seasonal workers who didn’t own their own land.

Paid by how much they picked, the only way for families to survive was for everyone in the family to join in with the work.

Waking when it was still dark, families would pile into trucks headed for the fields where they would work until the sun went down, often without a break.

Fighting to stay awake, come rain or shine, the children would pick cotton until their hands bled.

Frequently, the children lost weeks of schooling before the picking season ended and it was too late for them to catch up. Like agricultural work, cannery jobs were seasonal. Whole families would move on site for the season, living in squalid temporary quarters provided by the employers.

The day began at 3 am, with six- and seven-year-olds working alongside their parents. Payment was piecework and speed was everything.

Daisy helps at the capping machine, but is not able to “keep up.” She places caps on the cans at the rate of about 40 per minute working full time.

Shucking oysters at a seafood cannery, children might manage two four-pound pots per day while their parents filled eight or nine.

Piled up on the ground, the shells made it exhausting to keep a footing and their jagged edges cut into fingers.

The baby will shuck as soon as she can handle the knife.

Eighteen-hour working days were not uncommon and children using sharp knives were especially likely to hurt themselves toward the end of the day, when they were exhausted.

The salt gits in the cuts an’ they ache.

In vegetable and fruit canneries, produce had to be canned quickly before it wilted. Children would haul boxes to the weighing stations—some weighing between 30 and 60 pounds.

In comparison, selling newspapers was relatively easy work and a good education in the ways of business.

Children would buy as many newspapers as they thought they could sell. Their own salesmanship came into play, but so did the drama of the headlines and how kind the weather was.

Most “newsies” attended school all day and had decent homes to go to at night. They were the lucky ones.

The National Child Labor Committee’s work to end child labor was combined with efforts to provide free, compulsory education for all children, and culminated in the passage of the Fair Labor Standards Act in 1938, which set federal standards for child labor.

Peleș and Pelișor – Castles of the Romanian Royal Family