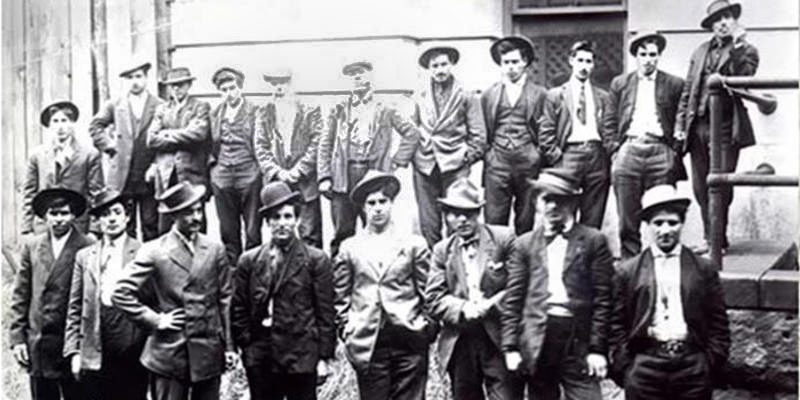 Victorian Era
527
SHARES
Share on FacebookShare on Twitter
You know how I stayed alive this long? All these years? Fear. The spectacle of fearsome acts. Somebody steals from me, I cut off his hands. He offends me, I cut out his tongue. He rises against me, I cut off his head, stick it on a pike, raise it high up so all on the streets can see. That’s what preserves the order of things. Fear.

Those are the gruesome words of Bill “the Butcher” Cutting, played by Daniel Day-Lewis in the Martin Scorsese film Gangs of New York.

150 years ago, an area in lower Manhattan called the Five Points played host to gladiatorial clashes between US-born native and immigrant Irish gangs.

The Five Points gained international notoriety as a disease-ridden, crime-infested slum that existed well into the 20th century.

Once the domain of middle-class homes built on reclaimed land, it became a sprawling slum within a relatively short period.

Stories of violent confrontations were legion, giving the press a never-ending supply of gory material to write about.

Brick-bats, stones and clubs were flying thickly around, and from the windows in all directions, and the men ran wildly about brandishing firearms. Wounded men lay on the sidewalks and were trampled upon. Now the Rabbits would make a combined rush and force their antagonists up Bayard street to the Bowery. Then the fugitives, being reinforced, would turn on their pursuers and compel a retreat to Mulberry, Elizabeth and Baxter streets.The New York Times, July 6, 1857
It is no unusual thing for a mother and her two or three daughters—all, of course, prostitutes—to receive their ‘men’ at the same time in the same room.New York Tribune, 1850
Every house was a brothel, and every brothel a hell.Five Points missionary Lewis Pease

The George Catlin depiction of 1827 shows the Five Points intersection as a bustling, densely populated area.

The triangular building in the center is located on what would be known as “Paradise Square”.

Anthony Street veers off to the right, Cross Street on the left and Orange Street runs left to right in the foreground.

The below modified aerial view of the Five Points shows the area around modern day Columbus Park.

Paradise Square would have filled the space currently occupied by the New York City Supreme Court. 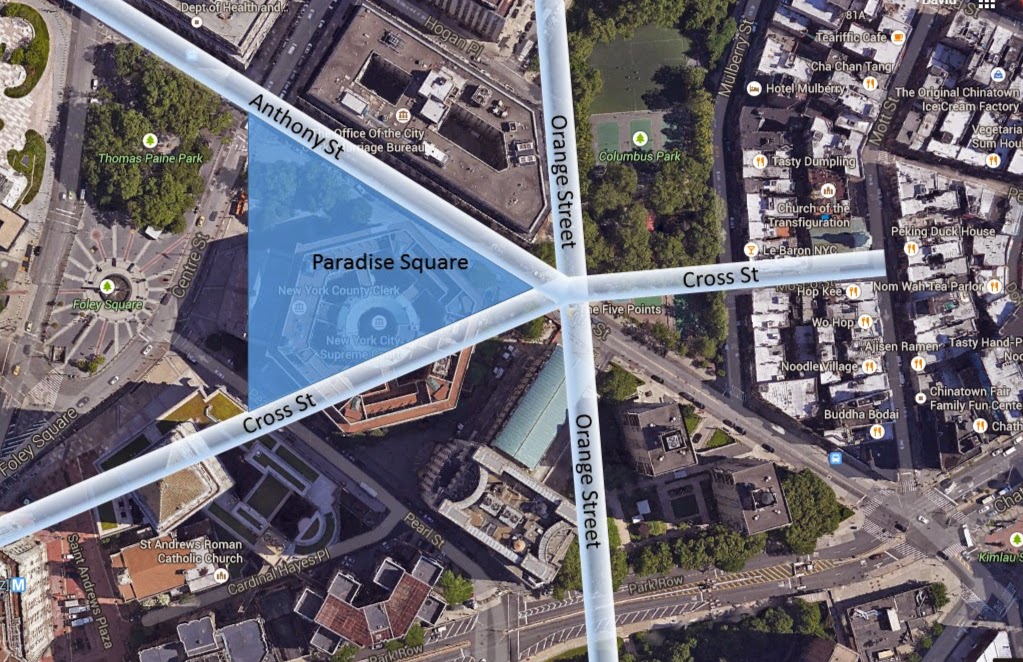 It’s hard to believe that in the 18th century the area that was to become the infamous Five Points was a beautiful meadow covering 48 acres, bordered by a hill known as Bayard’s Mount, and with the spring-fed Collect Pond at its center supplying the city’s fresh water.

People would picnic there during the summer, and skate on the frozen pond in winter.

This 1798 watercolor of the Collect Pond shows Bayard’s Mount, a 110-ft hillock, in the left foreground.

The Old Brewery in the Five Points typified the rapidly growing industries.

Tanneries, breweries, ropewalks, and slaughterhouses all began to use the water and dump waste in the neighborhood.

The pollution caused a major environmental health risk and the pond was eventually drained and filled with earth from the leveling of Bayard’s Mount.

A new middle-class residential community was built upon the landfill but was poorly conceived and engineered. 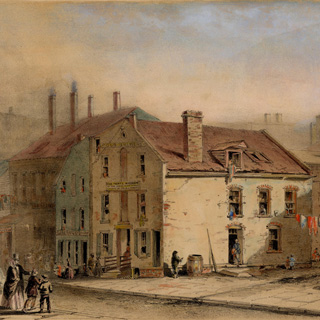 Mosquito-infested pools of human and animal excrement became intolerable for middle-class residents, who moved out, leaving the doors wide open for waves of immigrant poor.


What place is this, to which the squalid street conducts us? A kind of square of leprous houses, some of which are attainable only by crazy wooden stairs without. What lies behind this tottering flight of steps? Let us go on again, and plunge into the Five Points.
This is the place; these narrow ways diverging to the right and left, and reeking everywhere with dirt and filth. Such lives as are led here, bear the same fruit as elsewhere. The coarse and bloated faces at the doors have counterparts at home and all the world over.
Debauchery has made the very houses prematurely old. See how the rotten beams are tumbling down, and how the patched and broken windows seem to scowl dimly, like eyes that have been hurt in drunken forays. Many of these pigs live here. Do they ever wonder why their masters walk upright instead of going on all fours, and why they talk instead of grunting?

During the late 19th and early 20th century, a criminal organization known as the Five Points Gang inhabited the Sixth Ward (The Five Points) of Manhattan, New York City.

Founded by Paul Kelly (born Paolo Antonio Vaccerelli), an Italian American who earned his money prizefighting and running brothels, the Five Points Gang became a national crime syndicate with a reputation for brutality, and in battles with rival gangs, often fought to the death.

Kelly and his second-in-command Johnny Torrio recruited members from other gangs, including Al Capone who would later lead the Chicago Outfit.

Charles “Lucky” Luciano, also joined the Five Points crew and was later considered the most powerful criminal in the country.

Meyer Lansky, Bugsy Siegel, and Frankie Yale were also recruited into the Five Points Gang and became prominent criminals of the 20th century.

Based on Herbert Asbury’s 1927 book, Martin Scorcese’s 2002 movie “Gangs of New York” received a host of awards and was generally praised for its historical accuracy, including the names of the original gangs of the Five Points—the Bowery Boys, the Dead Rabbits, the Plug Uglies, the Short Tails, the Slaughter Houses, the Swamp Angels.

30 Beautiful Paintings of the American West by Albert Bierstadt

Dinner at Downton – What to Wear?