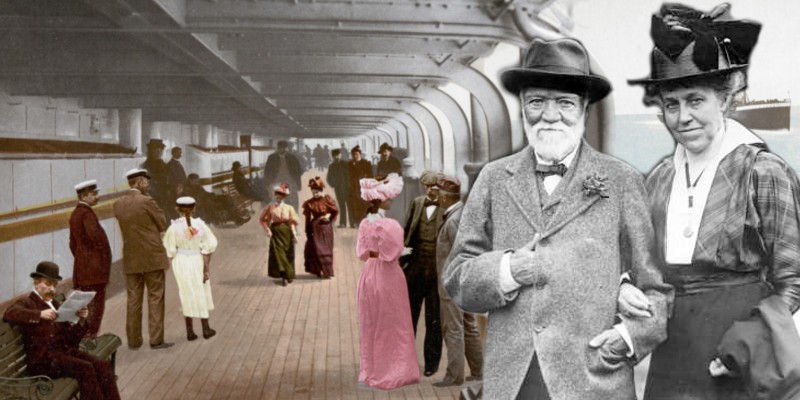 Ms Louise Whitfield was about to say “I do” to one of the richest men in the world in a quiet private wedding ceremony in her family’s home in New York City.

She was 30 and her soon-to-be husband was none other than industrialist Andrew Carnegie, 21 years her senior.

Louise had chosen to wear a gray wool traveling suit. A practical ensemble, the suit consisted of a skirt and two bodices for day wear, an extra set of cuffs, collar, and front insert of gold embroidery on red ground to adapt the suit for more formal occasions.

This is the wedding dress that an unassuming lady chose to wear to marry a man whose net worth just four years later would be the equivalent of $310 billion today. Devoted to his mother, Andrew Carnegie had avoided marriage while she was alive.

Never forgetting the role she had played in his success, he later wrote in his biography,

Perhaps some day I may be able to tell the world something of this heroine, but I doubt it. I feel her to be sacred to myself and not for others to know. None could ever really know her–I alone did that. After my father’s early death she was all my own.

When she died in 1886, he was 51 years old. Only now did he feel the time was right to marry Louise.

Andrew and Louise had met six years earlier while horseback riding through Central Park. She was the daughter of a business associate of his and within a year they had grown closer than just friends.

A year into their relationship, Andrew wanted her to accompany him and his mother on a trip back to Dunfermline, Scotland—the place where Andrew grew up in near poverty.

Some day, I’ll be rich, and we’ll ride in a fine coach driven by four horses.

It was something he had promised his mother as a young boy, “some day, I’ll be rich, and we’ll ride in a fine coach driven by four horses.”

His mother had replied, “that will do no good over here, if no one in Dunfermline can see us.”

Andrew asked his mother to convince Louise’s family to approve of the trip. Victorian sensibilities dictated that such a journey be seen as appropriate for the unattached Louise.

But instead of condoning the trip, Andrew’s mother undermined it, saying to Louise’s parents, “If she were a daughter of mine she wouldna’ go.”

If she were a daughter of mine she wouldna’ go.

Much to Louise’s dismay, she stayed in New York while Andrew and his mother returned to the home they had abandoned 33 years ago.

Thousands of townspeople greeted them. By this time, Carnegie’s fame and fortune were well known.

“Welcome Carnegie, Generous Son”, read the banners lining the streets. His mother wept tears of joy. This was her moment. They had left the town paupers but returned as if royalty.

Despite being snubbed, romance blossomed between Andrew and Louise on his return to New York. They were secretly engaged in September of 1883.

But only after his mother’s death could he commit to marriage. He wrote to Louise, “today … my first word is to you … Louise, I am wholly yours—all gone but you … I live in you now. Till death, Louise, yours alone.”

Louise, I am wholly yours … I live in you now.

Following their wedding, Mr. and Mrs. Andrew Carnegie boarded the steamship “Fulda” as it departed for their honeymoon in England and Scotland.

The couple enjoyed 32 happy years together.

Louise lived for another 27 years and continued making charitable contributions.

This was a proverb Carnegie’s mother had repeated often and one that would stand him in good stead to become one of the richest men in the world.