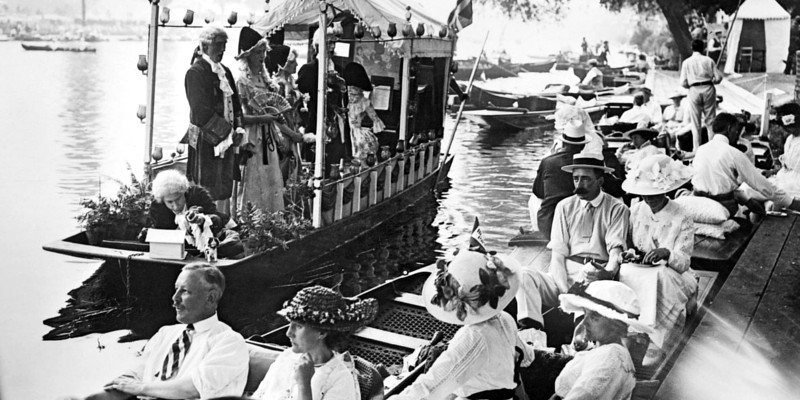 Only the two world wars could prevent the Henley Royal Regatta from running every year since 1839 on the River Thames in Oxfordshire, England.

Each summer, for five days from Wednesday to Sunday over the first weekend in July, the head-to-head races take place at Henley Reach—a naturally straight stretch of river over a mile long (2,112 metres).

Only two boats compete in each race, starting every five minutes.

Sixteen separate trophies are awarded, the most prestigious being the Grand Challenge Cup.

The first international competitors arrived in 1878 from the United States and Canada, with a team from Columbia College winning the “Visitors’ Challenge Cup”.

The Race of the Century

One of the most famous races was in 1895, when nationally renowned American rower Charles E. Courtney coached the Cornell varsity team for the Grand Challenge Cup at Henley Royal Regatta—the most important race in the rowing world at the time.

Courtney had developed quite a reputation at the Intercollegiate Rowing Association, with 14 of 24 varsity titles and several new world records.

In the first heat at Henley, Courtney’s team faced the London Leander Club—the favorites to win. Composed of Oxford and Cambridge University oarsmen, Leander were four-time defending champions, having won the Cup a total of seven times.

This would be the race of the century—setting Cornell’s short, fast stroke against Leander’s long and sweeping stroke.

The umpire asked if the crews were ready. “Yes”, said the Cornell coxswain. “No”, said two of the Leander crew.

But the umpire had not heard Leander’s “no” and gave the order to start.

Cornell shot off the starting line, but only half of Leander were rowing.

Leander stopped rowing and their coxswain protested loudly to the umpire, expecting it to be a false start.

When the umpire did not stop the race, Leander knew they had lost. Cornell rowed leisurely to the finish and won the race.

Marred by controversy, the Cornell team were labelled unsportsmanlike and were hounded by the British Press. Even the Chicago Associated Press gave them a hard time.

Cornell would go on to lose in dramatic style against Trinity Hall from Cambridge, with one Cornell member sustaining injuries as his oars missed the water and he almost fell out of the boat.

A Brief History in Pictures Mucha Do About Art Nouveau