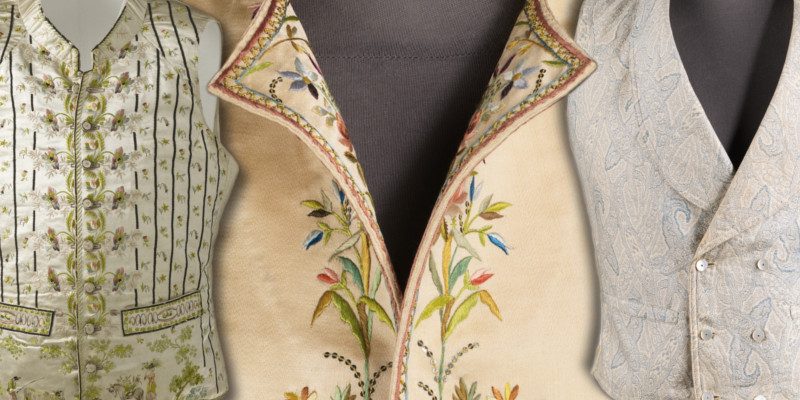 Today, waistcoats, or vests, are the essential third piece in the traditional three-piece male business suit.

Historians can precisely date their origin to King Charles II of England (1630 – 1685), who introduced the vest to the English court as part of correct dress.

the King hath yesterday in council declared his resolution of setting a fashion for clothes which he will never alter. It will be a vest, I know not well how

Originally a longer coat, the “vest” as it was initially called, later became the “waistcoat” as fashion demanded a shorter waist-level cut.

During the seventeenth and eighteenth centuries, men often wore elaborate and brightly-coloured waistcoats.

But changing fashions in the nineteenth century demanded a more subdued palette to match the new lounge suits.

Complementing the coat and breeches, luxurious fabrics and decoration were emphasized for the visible areas, while those unseen were made of cheaper fabrics like linen or wool.

Reserved for the most formal occasions, the shimmering waistcoat below would have been used for court appearances or high ceremonies.

Woven entirely out of metallic threads which were difficult and costly to work with, it would have been a very expensive purchase.

Troops of the regular army would wear waistcoats made from old worn-out overcoats turned inside-out so that the reverse-colored lining was on the outside.

From the inventive floral sprigs composed of different flowers, down to the bull’s-eye motif of the buttons, the embroidery on this vest is a particularly noteworthy remnant of 18th-century men’s wear.

Outstanding naturalistic leaves and petals and intricate floral motifs on this vest show the refinement of 18th-century embroidery.

Depicting Aesop’s (620-560 BC) tale of “The Wolf and the Crane”, the embroidery motifs on this vest show a crane removing a bone from a wolf’s throat.

Indicative of the status of the waistcoat as decoration was a playful style to the beautiful embroidery work.

Beginning in the 1820s, elite gentlemen of the more fashionable set—particularly the younger crowd and the military—wore corsets.

Emphasizing the masculine body shape for men, waistcoats became skin-tight and cut to give a broad-shouldered look, with pouting chest, and nipped-in waist.

If no corset was worn, then the fashionable male silhouette could be still be maintained with whalebone stiffeners and reinforced buttons up the front.

To help mold the waistline, the lacings in the back could be pulled tight.

Shawl collars and patterned textiles were a prominent feature of vests in the 1820s and 30s.

Popular throughout the middle of the 19th century, a padded chest and nipped in waist helped achieve the expected male body shape.

Although vests of the second half of the 19th century were more somber, the elaborate texture of this vest harks back to a more decadent era.

Inspired by French paisley shawls, the patterning of this vest proved very popular in the 1860s.

Adapted by Europeans from the Indian boteh form, goods featuring the paisley motif were imported from India by the East India Trading Companies in the 17th century.

Paisley has since become one of the most popular designs in fashion history.

Paired with a black evening suit, this vest made for a very elegant appearance, with intricate details such as the curve of the pocket mimicing the textile pattern and the embroidery detail.

Toward the end of the 19th century, the Edwardian look made a larger physique more popular.

King Edward VII is said to have started a trend to leave the bottom button undone to accommodate his expanding waistline.

Inside the Magical World of a Victorian Mansion Filled with Antiques

Versailles: the Grandest Palace of Them All