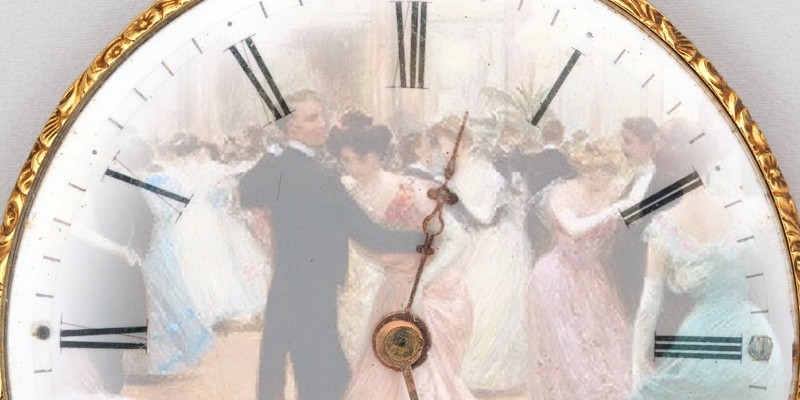 Designed to slip into the pocket of the new waistcoats introduced by King Charles II of England, pocket watches became a luxurious accessory for correct dress after the Restoration of the British monarchy in 1660.

Prior to this, they had been heavy, drum-shaped cylinders fastened to clothing or worn on a chain around the neck.

The French, Swiss, Dutch and Germans were the main artisans producing these beautiful watches that were essentially items of jewelry that incidentally told the time.

It wasn’t until 1680 that pocket watches introduced the minute hand and another 10 years before the second hand made an appearance.

Adorning the elaborately jeweled pocket watch below is a depiction of the young Louis XIV (1638 – 1715) on horseback.

One of the most important surviving watches of its period, it is thought to have been made as a gift for the young king.

It includes a miniature with the arms of France and Navarre and the Orders of Saint Michael and the Holy Spirit.

Britain was at the forefront of watch making in the 18th century.

Not only were half of the world’s watches made in Britain, but probably 70% of the innovation in a modern mechanical watch came from Britain.

Originally developed for large clocks like those of the town hall, the earlier watch mechanisms used the verge escapement—verge being derived from the Latin virga for stick or rod.

An escapement is a device that transfers energy to the watch’s timekeeping element, allowing the number of oscillations to be counted.

Inherent with the verge escapement design was a high degree of friction, with no jewelling to protect the contacting surfaces from wear.

As a result, a verge watch could rarely achieve any high standard of accuracy.

These three lines by the Jacobean playwright Thomas Middleton (d. 1627) sum up the unreliability of watches, which for the most part were more useful as jewelry than as timekeepers.

But with time came improvements.

The cylinder escapement invented by English clockmaker Thomas Tompion in 1695 and perfected by another English clockmaker, George Graham, in 1726, was much thinner allowing for very slim watch designs, which became the height of fashion.

Then in 1759, along came another Englishman, Thomas Mudge, with his invention of the lever escapement—the greatest single improvement ever applied to pocket watches.

With the lever escapement, watches could keep time to within a minute a day.

Although the exquisite craftsmanship of British and Swiss watchmakers dominated the first half of the 19th century, it was the Second Industrial Revolution in the latter third that catapulted America to center-stage of watch manufacturing.

Demand for pocket watches rose dramatically in the late 19th century, but Britain and Switzerland were ill-equipped to seize the opportunity.

The rise of railroads also spread the popularity of pocket watches and helped improve their reliability.

Attributed to one of the engineer’s watches running four minutes behind, a deadly train disaster in Kipton, Ohio in 1891, in which two trains collided at full speed, prompted new precision standards and safety inspections for Railroad pocket watches.

Colloquially called “railroad-grade pocket watches”, these precision timepieces had to meet the General Railroad Timepiece Standards adopted in 1893 by almost all railroads.

Pocket watches remained popular until World War I when officers in the field discovered that wristwatches were easier and quicker to use.

Gardens of the Gilded Age in 40 Glorious Images