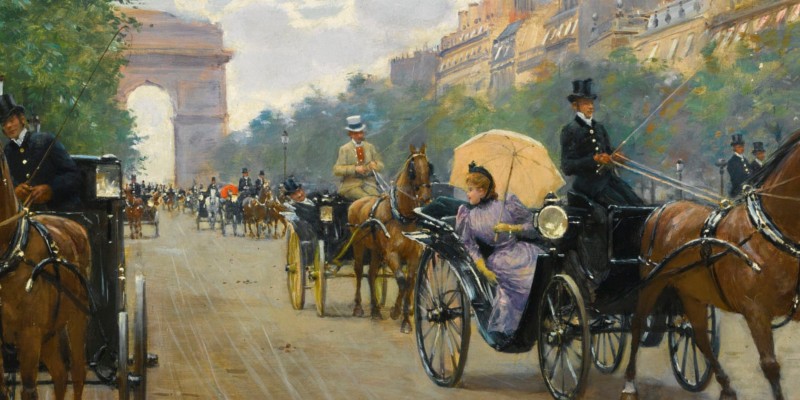 The Avenue des Champs Élysées is a boulevard in Paris 1.9 km (1.2 mi) long and 70 m (76 yds) wide, which runs between the Obelisk of Luxur at Place de la Concorde, and the Arc de Triomphe at Place Charles de Gaulle.

In France, they call it la plus belle avenue du monde “the world’s most beautiful avenue”. Listen to Gabriel Fauré as we travel back in time down the Avenue des Champs Élysées.

From the Place de la Concorde to the Rond-Point, we travel through the Jardin des Champs Élysées (Gardens of Champs Élysées), a park which has the Grand Palais, the Petit Palais, the Théâtre Marigny, and several restaurants, gardens and monuments.

Before Louis XIV, the area of the Champs Élysées was fields and kitchen gardens.

In 1667, French landscape architect André Le Nôtre, who had designed the gardens of Versailles, extended the Tuileries Garden to form the Champs Élysées gardens—together, a place where Parisians celebrated, met, promenaded, and relaxed.

By the late 18th century, the Champs Élysées had become a fashionable avenue.  Trees on either side formed elegant rectangular groves.

Gardens of townhouses belonging to the nobility backed onto the formal gardens of the Champs Élysée. The grandest of these was the Élysée Palace, which became the official residence of the Presidents of France during the Third French Republic.

Le Nôtre planned a wide promenade, lined with two rows of elm trees on either side and flowerbeds in the symmetrical style of the French formal garden.

In 1828, footpaths and fountains were added, then later gas lighting.

In 1834, under King Louis Philippe, the architect Jacques Ignace Hittorff was commissioned to redesign the Place de la Concorde and the gardens of the Champs-Élysées.

The main monument of the Boulevard, the Arc de Triomphe, was commissioned by Napoleon after his victory at the Battle of Austerlitz.

After Napoleon’s fall from power in 1815, the Arc de Triomphe remained unfinished—eventually being completed by King Louis Philippe in 1836.

Emperor Napoleon III selected the park as the site of the first Paris international exposition—the Exposition Universelle of 1855.

Covering 322,000 sq ft, a giant exhibit hall once stood where the Grand Palais is today.

Following the Exposition, in 1858, the gardens were transformed from a formal French design into a picturesque English-style garden, with groves of trees, flower beds and winding paths.

In 1860, merchants along the Avenue joined together to form a syndicate—the oldest standing committee in Paris—to promote commercial interests along the Champs Élysées.