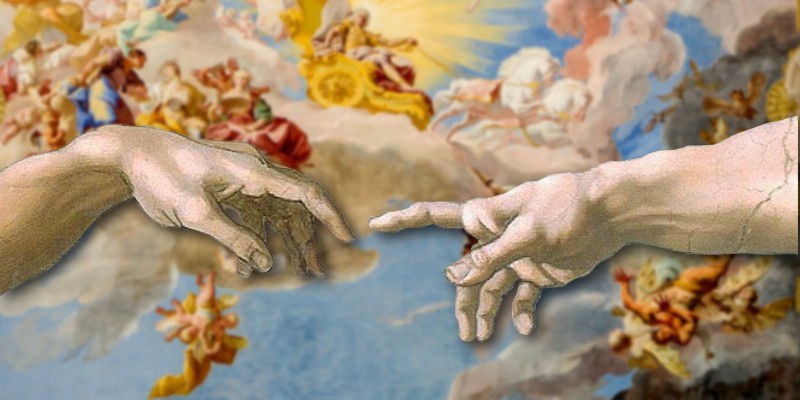 How could we begin without first mentioning the granddaddy of all ceiling frescoes that influenced so many others that followed—the Sistine Chapel in the Vatican.

Painted by Michelangelo between 1508 and 1512, the ceiling of the Sistine Chapel exemplifies High Renaissance art—a period of exceptional creativity during the late 15th and early 16th centuries.

Nine scenes from the Book of Genesis take center stage, of which The Creation of Adam is the best known, deservedly enjoying an iconic status equaled only by Leonardo da Vinci’s Mona Lisa.

Anyone who’s tried to paint a ceiling at home will know it’s back-breaking work. All that looking up. But imagine painting that way for 4 years solid!

Contrary to popular belief, Michelangelo didn’t lye on his back but painted in a standing position.

The work was carried out in extremely uncomfortable conditions, from his having to work with his head tilted upwards.Giorgio Vasari (1511 - 1574)

The ceiling rises to 44 ft (13.4 m) above the main floor, so, what does a 16th-century sculptor, painter, architect, poet, and engineer do to reach such lofty heights?

You guessed it—he designed his own scaffold. But instead of building from the floor up, he saved on wood by making a flat platform on brackets built out from holes in the wall near the top of the windows.

Besides his own heavenly creations, Michelangelo would inspire later artists like Austrian Paul Troger (1698 – 1762), whose illusionistic ceiling frescoes are notable for their dramatic vitality of movement and light color palette.

Here are 8 examples of heavenly baroque frescoes from 18th-century Austria.

Melk Abbey is a Benedictine abbey originally founded in 1089 overlooking the town of Melk in Lower Austria.

The Augustinian Herzogenburg Monastery in Lower Austria was founded in 1112 by Augustinian Canons, and refurbished in the Baroque style in 1714.

Sonntagberg Basilica is a baroque church in Lower Austria, Built between 1706 and 1732, Pope Paul VI gave it the title Minor basilica in 1964.

Altenburg Abbey is a Benedictine monastery in Lower Austria. It suffered numerous invasions and attacks, and was destroyed by the Swedes in 1645.

The present Baroque abbey replaced the earlier Romanesque structure, and is said to be one of the finest in Austria.

Originally founded in 1112, Seitenstetten Abbey is a Benedictine monastery in Lower Austria that was lavishly refurbished in the 18th century in the Baroque style.

Also known as the University Church, the Jesuit Church is a two-storey, twin-tower church in Vienna, Austria. It was remodeled using Baroque principles in the early 18th century.

The first church in the Austrian market town of Maria Taferl was built around a shrine to the Holy Mother, which is the origin of the town’s name.

Built between 1660 and 1710, the baroque Maria Taferl Basilica features ornate gold leaf decoration and the frescoed ceiling shown below.

Göttweig Abbey is a Benedictine monastery near Krems in Lower Austria.

Founded in the 11th century, the abbey burned down in 1718 and was rebuilt on a grander, more lavish scale.

The fresco decorating the imperial staircase (shown below) is considered a masterpiece of Austrian Baroque architecture.

10 Historic Victorian Homes from the Great State of Texas