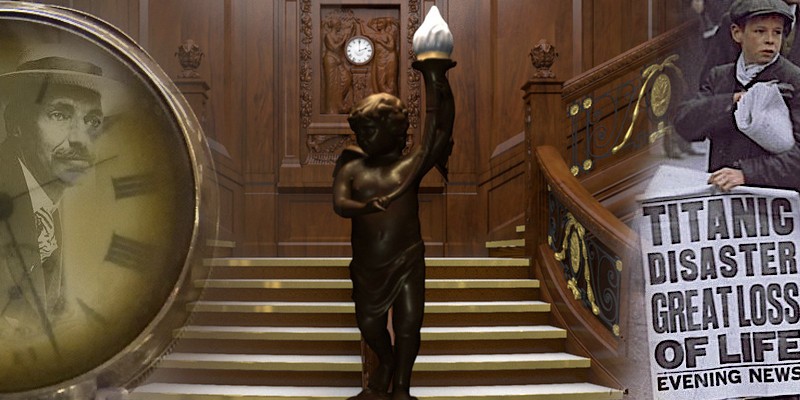 The “Ship of dreams”, Titanic was the pride of Liverpool’s White Star Line.

Billed unsinkable, she would send 1500 souls to a watery grave on her maiden voyage.

There’s something for everyone in our latest post—the glamour, the fashion, the technology, and the tragedy.

1. Titanic was the largest moving object ever built

The New York Tribune ran a headline on Sunday, November 27, 1910 asking the question:

How can we dock this marine monster when she reaches the port of New York?

It showed an illustration of Titanic with the famous Halve Maen “Half Moon”—the Dutch ship that sailed into New York Harbor in 1609—wholly contained within Titanic’s hull. Could people in the Edwardian era imagine that even Titanic would be dwarfed by passenger cruise ships of the future.

Today’s largest cruise ships—the Royal Caribbean’s Oasis of the Seas and sister ship Allure of the Seas are both 1187 ft (362 m) in length and reach 213 ft (65 m) above the waterline.

2. One of Titanic’s funnels was fake

Only three of Titanic’s four funnels were functional—the fourth was a dummy installed because it made the ship look more beautiful and was made into a ventilation shaft for the kitchen.

Imagine you are the Titanic’s designer. Which looks better—3 or 4 funnels?

The interior of Titanic was modeled after the Ritz Hotel, with first-class cabins finished in the Empire style.

Related post: The Changing Face of the Second Empire

Aiming to convey the aura of a floating hotel, it was intended for passengers to forget they were on board ship, and feel as though they were in a hall of a great house on shore.

Each plate was between 1 inch (2.5 cm) and 1.5 inches (3.8 cm) thick and needed fastening together with steel rivets—three million of them. It’s the same principle used on your jeans.

Rivets are incredibly strong and hold together structures like the Eiffel Tower and Brooklyn Bridge.

Heated, then driven through holes by hydraulic machines, they held together Titanic’s plates with a watertight seal.

But here’s the thing—there wasn’t enough room to use the hydraulic machines on the bow (the forward part of Titanic’s hull). So men had to hammer them through by hand.

To make that job easier, the rivets for the bow of Titanic (and the stern) were made of softer wrought iron—the quality of which was questionable.

Imagine the rivets are like a zipper. If enough force is applied, once the first rivet breaks, the others follow. And so it was when Titanic’s hull collided with the massive iceberg—the plates ripped apart.

Sometimes the smallest things matter the most.

Titanic was one of the first ships to offer improved steerage (third class) accommodation.

Third-class passengers also had their own dining rooms with pine paneling and sturdy teak furniture.

Substantial open deck space was also made available, as was a smoking room for men and reading room for women—both far exceeding the average for the time.

6. Titanic was an ideal venue for debutantes

For ambitious mothers looking to marry off their daughters to eligible bachelors, Titanic was a venue par excellence.

A passenger list was published before sailing—a veritable “who’s who”—to make everyone aware of which society elites would be gracing the ship with their presence.

Ladies, what would you choose to wear from this sample of Edwardian haute couture?

The Grand Staircase descended through seven decks of the ship, capped with a dome of wrought iron and glass to admit natural light.

Each landing off the staircase gave access to ornate entrance halls lit by gold-plated light fixtures.

It is thought that the inrush of water in the final moments pushed the entire Grand Staircase upwards through the dome.

8. “We are safer here than in that little boat” John Jacob Astor IV, who went down with Titanic on that fateful night of April 15, 1912, was one of the richest men in the world.

As people jostled for space aboard lifeboats, Mr Astor initially dismissed the idea of leaving the ship’s safety, saying to his pregnant wife:

We are safer here than in that little boat.

Astor had built the Astoria Hotel “the world’s most luxurious” in 1897, which later merged with the Waldorf to become the Waldorf-Astoria complex.

His net worth was said to have been in the billions. But here’s the problem with calculating someone’s net worth in 1912: there were no income taxes—not until the following year.

Nevertheless, shortly after the disaster, the New York Times ran a detailed study of the real-estate holdings that Astor’s son, Vincent, would inherit. Factoring additional bequests to his wife and daughter, they arrived at $150,000,000—valued at around $3.75 billion today.

9. And the band played on

If there is any consolation for the eight musicians who perished aboard Titanic, it is that they indulged their passion for music until the very end.

These heroes decided to start playing to help calm the passengers as the crew helped women and children board the lifeboats. One survivor said,

Many brave things were done that night, but none were more brave than those done by men playing minute after minute as the ship settled quietly lower and lower in the sea. The music they played served alike as their own immortal requiem and their right to be recalled on the scrolls of undying fame. This watch tells the story of when time ran out for over 1500 people.

From a Titanic exhibition at Southampton, a retrieved fob watch from an unknown passenger stopped at the approximate time the ship went down on that fateful night on April 15 1912 at 02:20.

Only 13 were helped into lifeboats, even though there was room for another 500.

References
wikipedia.org
CNBC—How Much Was Titanic Victim John Astor Worth?
The Telegraph

The Execution of Guy Fawkes and the Gunpowder Plotters – Hanged, Drawn and Quartered