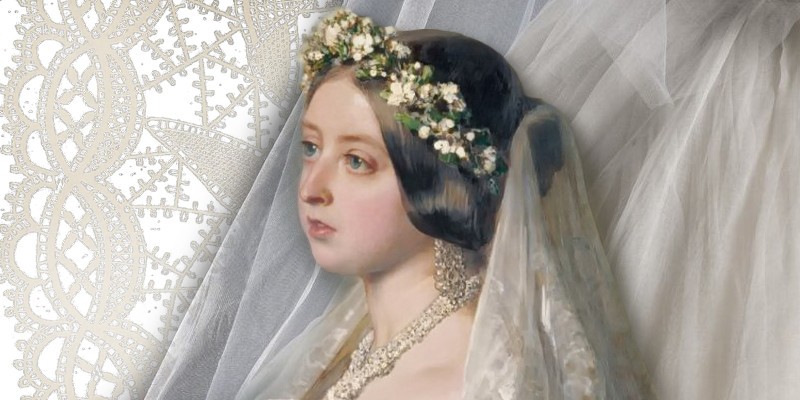 Although Queen Victoria was not the first monarch to wear white at her wedding, she is credited with starting the tradition of a white wedding when she chose to wear a white wedding dress to marry Prince Albert in 1840.

2. Wearing white was unusual at the time of her wedding

At the time of Queen Victoria’s wedding, wearing white was considered unusual, but in less than a decade, it was being proclaimed as a long-standing tradition. Godey’s Lady’s Book—the most widely circulated magazine in America—wrote:

Custom has decided, from the earliest ages, that white is the most fitting hue, whatever may be the material. It is an emblem of the purity and innocence of girlhood, and the unsullied heart she now yields to the chosen one.

Not only did white wedding dresses connote innocence and sexual purity, but because laundry technology was not very advanced in the early Victorian period, they also represented a way to display conspicuous consumption.

White wedding dresses showed that the bride’s family could afford a dress that would be ruined by any type of work, indicating that they must be from the leisure class.

4. Queen Victoria wrote about her wedding dress in her 122-volume diary

Queen Victoria was an avid diarist, filling 122 volumes during her lifetime. Describing her choice of wedding dress, she wrote:

I wore a white satin dress, with a deep flounce of Honiton lace, an imitation of an old design. My jewels were my Turkish diamond necklace & earrings & dear Albert’s beautiful sapphire brooch.

The lace used for Queen Victoria’s wedding dress was from Honiton in Devon. Lace making was still a cottage industry and her choice demonstrated support for working-class Britain.

The lace comprised of sprigs or motifs made separately and then sewn together into a net.

It is thought Flemish refugees brought the art to England in the mid-to-late 16th century.

6. She commissioned Franz Xaver Winterhalter to paint an anniversary gift for Albert

In 1847, Victoria commissioned Franz Xaver Winterhalter to paint a portrait of her wearing her wedding clothes as an anniversary present for Prince Albert. The portrait was also copied as an enamel miniature by John Haslem.

The veil, which matched the flounce of the dress, was four yards in length and 0.75 yards wide. When Victoria died, she was buried with her wedding veil over her face.

Wedding veils helped promote the Victorian ideal of modesty and propriety. Etiquette books spread the notion that decorous brides were naturally too timid to show their faces in public until they were married.

Queen Victoria’s white satin slippers matched the white colour of her dress. Long ribbon ties fastening round the ankles held the shoes in place. They were made by Gundry and Son, 1 Soho Square, Boot and Shoemakers to the Queen.

10. She started a trend followed by millions

Hollywood movie weddings, especially in the second half of the 20th century, have helped the popularity of white weddings.

But British royal weddings have probably done more to ensure the tradition of white weddings is here to stay than anything else.

In 1981, 750 million people tuned in to watch Charles, Prince of Wales marry Diana Spencer in her elaborate white taffeta dress, with a 25-foot-long train. This wedding is generally considered the most influential white wedding of the 20th century—and also the most expensive at an inflation-adjusted $110 million.