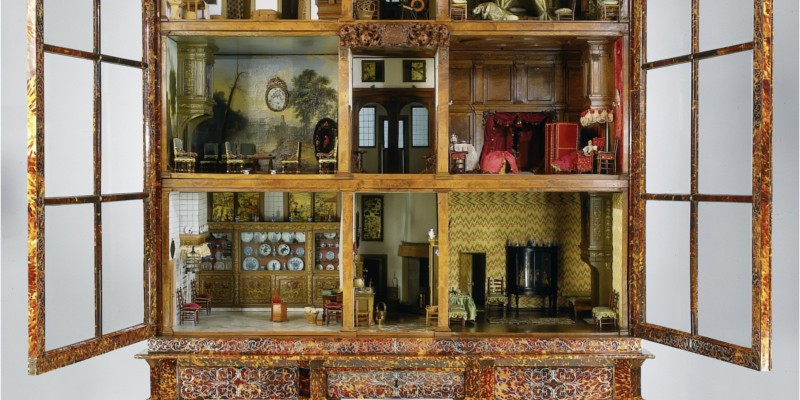 Welcome to the magical world of antique dollhouses.

The 17th-century dollhouse of wealthy Dutch widow Petronella Oortman is of such historical significance that it resides permanently in the Rijksmuseum in Amsterdam.

Like other rich women in Amsterdam and the Hague, Petronella had a dollhouse built that she curated over many years, starting in 1686, and filling it with expensive decorative materials and miniatures.

Popular among 17th-century German, Dutch, and English nobility, these dollhouses were less about play than they were ornamental conversation pieces—often filled with real miniature silver and porcelain objet d’art.

In fact, children were off-limits for these extravagant trophy collections for fear of them being damaged.

Sara Rothé was another famous owner of dollhouses.

An 18th-century art collector from the Northern Netherlands, she made two dollhouses that were miniature copies of her two homes.

Skilled at embroidery, she embroidered most of the cloth furnishings in the dollhouses.

Although initially handmade by individual craftsmen, following the industrial revolution, dollhouses were increasingly mass-produced, and as such, were more affordable.

German firms were the leaders up until World War I, with their dollhouses regularly exported to the United States and Britain.

Showcasing the very finest goods of the period, Queen Mary’s Doll’s House was built for Queen Mary, the wife of King George V in 1924.

At five feet tall, it contains an incredible collection of working miniatures: running water, toilets that flush, electric light switches, working elevators, and even a garage with cars that have running motors.

American dollhouses were introduced by the Bliss Manufacturing Company towards the end of the 19th century. Firms like Roger Williams Toys, Tootsietoy, Schoenhut, and the Wisconsin Toy Co began to flourish in the early 20th century.