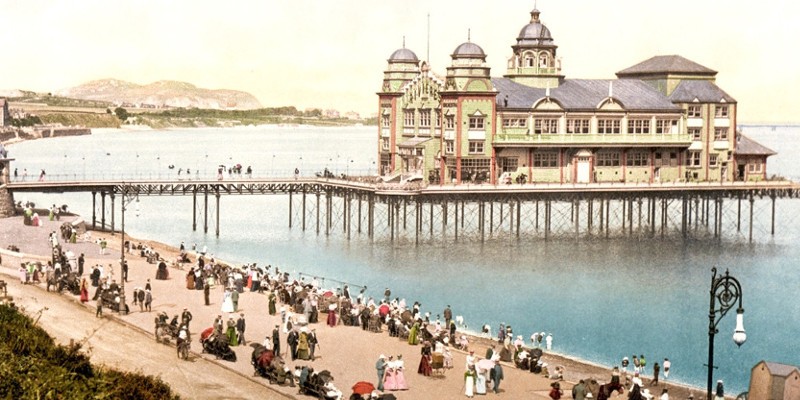 Britain’s heritage of piers dates from the boom in seaside resorts during the Victorian era.

The first seaside piers were built in England in the early 19th century.

Serving the town of Ryde on the Isle of Wight off England’s south coast is the world’s oldest seaside pleasure pier. Ryde Pier opened on 26 July 1814.

It was the introduction of the railways that, for the first time, enabled ordinary folk to travel to seaside resorts.

By 1850, there were a dozen piers at British seaside resorts.

Providing a walkway out to sea, these fashionable and select extensions of the seafront promenade allowed holidaymakers to experience being close to the sea at all times—even at low tide.

As the industrial revolution gained pace, iron piles were introduced that were literally screwed into the ground, providing enough rigidity to support a whole range of entertainments and attractions along the pier’s length, from theaters to penny arcades, from ballrooms to bowling alleys.

Opened in 1855, Margate Pier was the first of this new breed of pleasure pier, catering to the needs of thousands of tourists.

By 1900, there were 80 fully fledged piers, with some seaside towns having two or three piers.

Remarking on the pace of pier development in the 1890s, one commentator said it would be

necessary to alter the map of England and represent it as a huge creature of the porcupine type, with gigantic piers instead of quills

Here are 18 of the most beautiful seaside pleasure piers of the Victorian era.

Margate claims a number of firsts for its once magnificent Victorian pier. It was the first pier from the famous pier designer Eugenius Birch, the first iron pier, and had been an 1100 foot wooden jetty called “Jarvis Landing Stage” since 1824—long before the reign of pleasure piers.

A drifting vessel and storm damage ultimately led to the pier’s demise, with some relics to be found in Margate Museum.

As Great Yarmouth grew in prominence as a holiday destination, the wooden structure was replaced by a steel construction, housing a 2000-seat pavillion.

At 3,600 ft, Southport Pier is the second longest pier in Great Britain after Southend Pier, but at one time reached 4380 ft.

A cable operated tramway opened in 1865, running from the promenade to the far end of the pier and a tram has run in various guises ever since, only recently closing in June 2015 due to rising maintenance costs.

Opened as a simple 960-ft promenade deck, Worthing Pier was upgraded in 1888 with a 650-seat pavillion.

When only the stranded pier head remained after storm damage on Easter Monday, 1913, it became affectionately known as “Easter Island”.

Intended only as a promenade, the popularity of Blackpool as a major tourist resort forced the oldest and longest of its three piers to offer other attractions including theatres and bars.

Designed by Eugenius Birch, it is the oldest remaining of his fourteen piers.

Designed by Eugenius Birch to attract tourism to Brighton, the West Pier was constructed during the 1860s boom in pleasure pier building.

At its peak in 1919, it attracted two million visitors, but its popularity declined after World War II, eventually closing in 1975 after the owners filed for bankruptcy.

Decay and two major fires in 2003 have rendered it a mere shell of its former self.

Serving as a boarding point for steamships in the Bristol Channel, Birnbeck Pier was popular with tourists during the late 19th and early 20th centuries and is the only pier in England that links the mainland to an island.

Designed by Eugenius Birch, it is designated as part of England’s “Heritage at Risk”, being derelict and vulnerable to further decay since 1994.

Arriving in Saltburn in 1861, the Stockton and Darlington Railway prompted a growth in tourism that spurred the construction of a 1500 ft pier with a steamship landing stage and a Cliff Hoist to provide access from the town via the steep cliff.

Opened by Lord Edward Cavendish, son of the 7th Duke of Devonshire, Eastbourne pier was 1000 ft long and with its bands and theatre, only offered the highest class of entertainment.

At the seaward end was a 400-seat domed pavilion, which was later replaced by a 1000-seat theatre, bar, camera obscura and office suite. Midway along the pier were two saloons.

Designed by Eugenius Birch, it was built on stilts resting on cups on the seabed so that the whole structure could move during rough weather

The first building in the new resort of Clacton-on-Sea, the pier was originally a wooden structure 480 ft long and 12 ft wide, serving as a docking station for steamships.

Becoming a popular destination for day trips, Clacton Pier was extended in 1893 to 1180 ft and a pavillion and other entertainment facilities were added.

Fire and storm damage caused significant structural weakness, but an ambitious restoration project was undertaken in 1994 to creae a modern amusement park.

Designed by Eugenius Birch—famous for the West Pier at Brighton and Eastbourne’s Pier—Hastings Pier was opened on the first ever August Bank Holiday in 1872.

After a tumultuous history of storm damage, fires, and failed attempts to salvage the pier, it closed in 2008. National Lottery funding in 2012 eventually kickstarted a major redevelopment plan with the pier opening again on 27 April 2016.

Damaged by ships and storms and eventually demolished in 1972, Rhyl Pier once reached out 2,355 ft into the sea in North Wales and included a pier railway.

Beside it stood the five-domed ornate Pavillion Theatre, once a famous Rhyl landmark.

At 2295 ft, Llandudno Pier is the longest pier in Wales and is often chosen for Victorian and Edwardian seaside filming locations.

A 2,000-seat Pavillion Theater opened in 1886 with three stories and a flamboyant cast-iron veranda running the entire seaward façade. It burned down in 1994 and was not replaced.

At the time of its opening, the Skegness Pier, at 1,842 ft, was the fourth longest in England.

Featuring a saloon and concert hall at the pier head, it was damaged by a drifting ship in 1919 and today is only 387 ft long.

Opened by Lady Folkestone on 21st July 1888, the pier’s pavilion could seat 800 patrons and provided high-brow entertainments for Folkestone’s largely aristocratic clientele. A stroll on the pier cost 2 pennies.

Spending time by the sea was considered good for one’s health and many Victorian Londoners came to Southend for this reason.

But the sea recedes at Southend for over a mile, necessitating the original 60o-ft structure to be extended to 7,000 ft, making it the longest pier in Europe and the longest pleasure pier in the world today.

Originally extending 1800 ft into the Irish Sea at Morecambe Bay, the pier suffered storm and fire damage but continued to soldier on, providing entertainment until 1978 when it was finally demolished.

Still existing today is the restaurant at the pierhead which later became a ticket office and cafe.

At a short distance from the entrance, a large concert marquee housed the local Cremona orchestra and an electric tram cost 1 penny to take people from one end of the pier to the other.

Opening in June 1900 at a length of 750 ft, the pier included a massive 2500-seat pavillion in the Moorish Revival style.

Boasting a large balcony extending around three sides of the auditorium, the pavilion featured a full orchestra pit.

Despite many changes of ownership due to financial difficulties, fires, and several regeneration attempts, the pier sits in a state of disrepair and collapse.