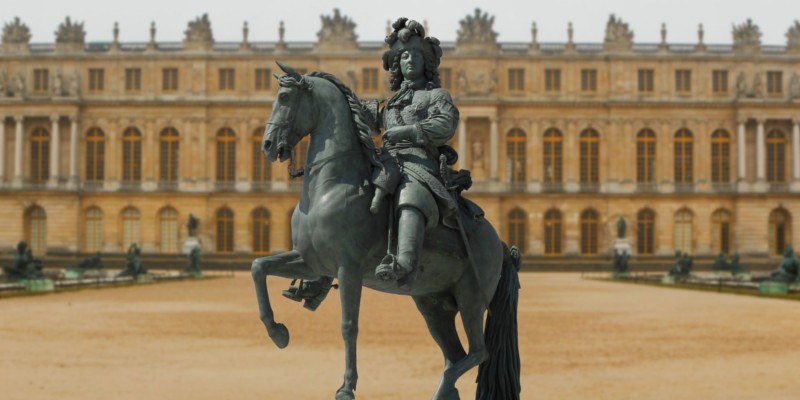 King Louis XIV was so proud of Versailles that he would often give tours to visiting dignitaries himself and even wrote the first guidebook.

Ah, here he comes now. Why don’t we just see if we can tag along on his next tour.

Greetings.
Welcome to my home, my court, and of course, my playground: Versailles.
I am Louis XIV, the greatest French King who ever lived.
Those closest to me say I am the best King in the world!
It is true, no … ?
Be careful with your answers, my friends …
Ah, but enough about me, let us enjoy this tour of my magnificent home.
We shall begin with les jardins … excusez moi, the gardens.
Come, come, my little petit pois, follow me …

To say that Louis liked space is somewhat of an understatement. By the end of his reign, Versailles covered a staggering 37,000 acres—bigger than the city of San Francisco.

After the revolution, only a fraction remained, but even so, today it still covers 2,014 acres—twice the size of New York’s Central Park—making it the largest royal domain in the world.

It takes aerial views to fully appreciate the sheer scale of Versailles. The multiple wings and hidden courts of the palace are just part of a huge complex around the town of Versailles.

At almost a mile long, the Grand Canal appears to vanish into the distance.

Built in the shape of a cross, the Grand Canal runs east to west, traversed by arms running north to the Trianon Palace (a little getaway for the King) and south to the Menagerie (a precursor to the modern zoo).

This east-west orientation was no coincidence. It meant that the sun would rise and set in alignment with the palace.

Housing more than a thousand trees in planters, most of which are citrus, the Orangerie is a grand extension to the gardens built to store delicate plants during the winter months.

Citrus fruits were expensive and highly prized in the 17th century and the preserve of the wealthy.

Between May and October, the plants are moved outdoors to the Parterre Bas for display.

While the French populace starved, Louis was far too preoccupied with his water problem to notice.

He couldn’t get enough water pumped to the gardens to run his 1400 fountains simultaneously.

Along came the architect André Le Nôtre (1613–1700) to the rescue—the undisputed master of the baroque garden. His skills with mechanical engineering, chemistry, and horticulture made Versailles’s fountains a reality.

Le Nôtre created a network of reservoirs and canals stretching for 18 1/2 miles outside the château. A massive pumping machine thought to be the Eighth Wonder of the World brought water from the Seine River.

Leakage and breakdowns of the pump meant that it only supplied half the required amount of water. So Louis gave the go-ahead for an extravagant plan to divert water from the River Eure over 60 miles away.

One tenth of France’s entire military worked on the project, digging a canal and aqueduct, plus all the shipping channels and locks to keep the workers supplied with raw materials.

Were it not for the outbreak of war bringing the work to a halt, Louis’s big water problem would have been solved.

Scattered throughout the gardens are over three hundred statues and sculptures of everything from flute playing shepherds (Acis), to daydreaming princesses (Ariadne), to sea monsters, and Trojan priests (Laocoön) being attacked by giant serpents.

Ah, there you are my little petit bonbons.
As you can see, I’m working on my next building project.
How did you like mes jardins? … excusez moi, my gardens?
Exquisite, no?
Bon. You answered correctly. You are keeping your head today.
Come along, come along, follow me—we have much to see inside …

At the beginning of each day would be a routine called the lever—the royal awakening ceremony.

To see the King rubbed down with rose-water, watch him shave, or even go to the bathroom, was considered a great honor.

Following this elaborate wake-up ritual, Louis would then pass through the Hall of Mirrors on his way to the chapel.

Facing the gardens and the rising sun, shafts of sunlight would stream into the room, filling it with a golden light.

Self-styled the “Sun King”, Louis chose the sun as his personal symbol.

Naturally, his courtiers thought the sun shined out of his derrière. One look from Louis in their direction had their heads spinning.

When the King condescends to glance at someone, that person considers his fortunes made and says to others “the King looked at me!”Primi Visconti, chronicler to the French court

Cunning as he was, Louis was a master at keeping people dangling with the words, “we’ll see.”

In the chapel, he required all in attendance to face him, not the altar, so that they could witness the King worshipping God.

He saw himself as the living embodiment of the Greek God Apollo—god of music, prophecy, healing, and the sun.

Bonjour, my little petit fours.
How do you like my stockings? Ooh la la! You will not find a finer pair in all the world!
Bon. You answered correctly.
I must leave you now for my little “coucher”—my sundown ceremony.
Enjoy yourselves, and don’t do anything I wouldn’t do …
Au revoir.

Bravado might well have been Louis’s middle name—he certainly had the stats to back up the swagger:

The Palace of Versailles stands at a crossroads in history. Copied throughout Europe, it marks the pinnacle of decadence and the beginning of the end for absolute monarchy.

Who were the real heroes of Versailles? Not those who lounged in its luxuries, surely?

The real heroes were the architects, builders, laborers, and the 30,000 soldiers drafted in to help, many of whom died from fever and disease in the swampy conditions of the early Versailles.

We salute you, citizens of France. You did not die in vain. Your work lives on as a testament to human achievement.

Such excesses don’t last forever. The revolution brought sweeping change and streets filled with the blood of the decadent.

And across a blue ocean, a new country was in its infancy. A land that would welcome the downtrodden masses with open arms.

Give me your tired, your poor,
Your huddled masses yearning to breathe free,
The wretched refuse of your teeming shore.
Send these, the homeless, tempest-tost to me,
I lift my lamp beside the golden door!
Emma Lazarus

References
Wikipedia.
The Sun King’s Garden: Louis XIV, Andre Le Notre and the Creation of the Gardens of Versailles by Ian Thompson.
The Khan Academy.