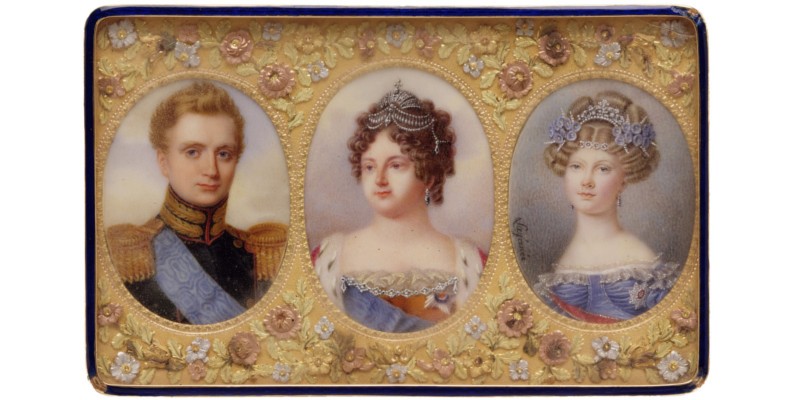 The stories from history are all around us. Take this image of a snuffbox from Russia for example. It is part of the Metropolitan Museum of Arts’ collection of public domain images.

What we know from the labeling is that the images are of Empress Maria Feodorovna, her son Grand Duke Michael Pavlovich, and her daughter-in-law Elena Pavlovna.

We also know it was created circa 1823 by Anthelme François Lagrenée, a French painter of miniatures whose work has fetched at auction in excess of $20,000 for single portrait miniatures and $80,000 for larger works.

It is indeed beautifully crafted, but what story does it tell? Let’s find out, shall we?

Maria Feodorovna (1759 – 1828) née Sophie Dorothea of Württemberg (pictured center) was the second wife of Tsar Paul I of Russia—son and successor to Catherine the Great.

The circumstances surrounding her betrothal to Paul I read almost like a soap opera.

In 1773, Catherine the Great started to look for a suitable wife for her son Paul. Sophie Dorothea was one of several German Princesses under consideration. But not yet fourteen years old, a marriage to Sophie would have to wait a few more years. The older Wilhelmina Louisa of Hess-Darmstadt was chosen instead.

Paul decided on the good-looking Wilhelmina to be his wife just two days after her arrival in Russia. She changed her religion and her name—becoming Natalia Alexeievna. The wedding was a grand spectacle and the vivacious Natalia lit up the Russian court.

But there were cracks beneath the surface. She started an affair with a charming navy commander named Andrei Razumovsky—the very man she had flirted with on the ship sent by Catherine to bring her to Russia. What made it worse was that the whole court knew of her infidelities. And worse still, the man was Paul’s best friend.

As if that wasn’t enough, when Catherine tried to banish Andrei from court, and Paul protested—knowing nothing of the affair—Natalia announced she was pregnant. Catherine didn’t care whose child it was—all that mattered was that there was a Russian heir.

Everything changed on 15 April 1776 when Natalia went into labour. She delivered a stillborn son and died soon after. Many at court thought she could have been saved had surgeons performed a Caesarian.

And so Maria Feodorovna, now seventeen, came back into the picture as front-runner for Paul’s second wife. But her life had changed. She was engaged to Natalia’s brother, Prince Louis of Hesse.

For Catherine the Great, such issues were mere trifles. She knew Louis was in debt up to his eyeballs and simply paid him off. They didn’t call her “great” for nothing.

Sophie knew that Paul was the serious kind and so had swotted up on her geometry. Oh yes, she skipped the small talk and went straight for the geometry. And it worked like a charm!

Paul wrote to his mother, “She is tall, shapely, intelligent, quick-witted, and not at all shy.” Sophie wrote to a friend that she was “madly in love“, adding, “I am more than content … never, dear friend, could I be happier.”

Their love grew deeper as the months passed. She wrote to Paul in a love letter, “I cannot go to bed, my dear and adored Prince, without telling you once again that I love and adore you madly.”

The happy couple were married on 26 September 1776. Sophie took the name “Maria Feodorovna” and the title Grand Duchess of Russia styled Imperial Highness.

A few months after the birth of their ninth child in 1798 (yes, ninth!—families were big in those days), Catherine the Great died. Maria was now Empress Consort of All the Russias.

If you think Russian palaces are beautifully decorated, you can thank Empress Feodorovna’s impeccable taste. She personally guided the furnishing of Gatchina, Tsarskoe Selo, the Winter Palace, and the Hermitage.

She adored the arts and supported them generously. She also established the first schools for women, as well as numerous charitable organizations.

According to soap opera rules, when life gets this good, something has to go wrong, doesn’t it?

And so it did.

Paul started seeing another woman, Catherine Nelidova—one of Maria’s ladies-in-waiting. It deeply wounded Maria because the woman had been her friend. But Paul assured her that the relationship was nothing more than a friendship. After a couple of years, Maria accepted his word—especially since Paul was growing increasingly neurotic.

But when Paul became infatuated with the nineteen-year-old beauty Anna Lopukhina shortly after the birth of their tenth son, Michael, in 1798, Maria saw red. Anna was from one of Russia’s oldest noble families—the same family that Paul’s first wife had belonged to.

Now … we know what you’re thinking, but when you’re the Emperor of Russia, looks don’t matter. By all accounts, Paul wasn’t a handsome man. In fact, many thought him plain ugly. The accomplished painter Madame Vigee-Lebrun described his physical appearance as lending itself to caricature.

But what he lacked in looks, he made up for in charm. Dowager Countess Lieven said he had “good manners” and that “his politeness to women” proclaimed him “a prince and a gentleman.”

Just three years later, when Paul was in his bedchamber in the newly built St Michael’s Castle, he was brutally murdered.

It was a time in Russia when it was dangerous to upset the nobility. Paul had done just that with a set of reforms and policies that made enemies. A band of officers stormed his bedchamber and tried to force him to sign his own abdication. When he resisted, he was stabbed, strangled, and trampled to death. His own son, the 23-year-old Alexander, who was next in line for the thrown was in the building. In a rude awakening, the assassins shouted to him, “Time to grow up! Go and rule!”

But it is the dashing officer in the left of our snuffbox image that we turn to next. Sporting a rather modern hairstyle even by today’s standards, this is Maria’s youngest son, Grand Duke Michael Pavlovich. 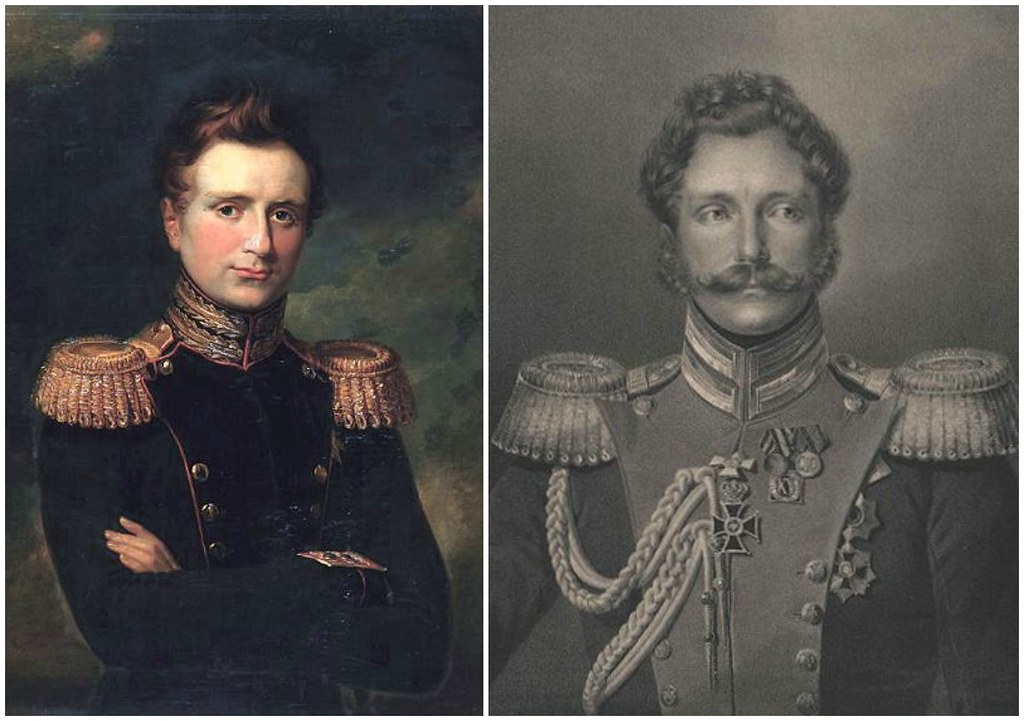 Michael married his first cousin once removed, Princess Charlotte of Württemberg, who just happens to be the attractive young lady portrayed in the image on the right side of our snuffbox.

So here we have the possible reason for the creation of our exquisite snuffbox. The title provided by the Metropolitan Museum of Art describes Elena Pavlovna as the daughter-in-law of Maria Feodorovna, with a creation date c. 1823. Grand Duke Michael and Elena were married on 20 February 1824, so it could have been a wedding gift, either from Maria herself or from someone close to Maria who would have known she likely instigated the arranged marriage.

Was the marriage of Michael and Elena a happy one?

Michael was 26 and Elena 17 when they got married. He had been impressed by her beauty, poise, and intelligence at a dinner party two years prior. They lived in comfort at the Mikhailovsky Palace in St Petersburg—when you’re Russian royalty, even as the youngest of ten children, you get a nice pad!

But again there were cracks under the surface. Michael’s only passion was the army and their marriage wasn’t a happy one.

They had five children—in those days, large families were common because of the expectation that some might die young. 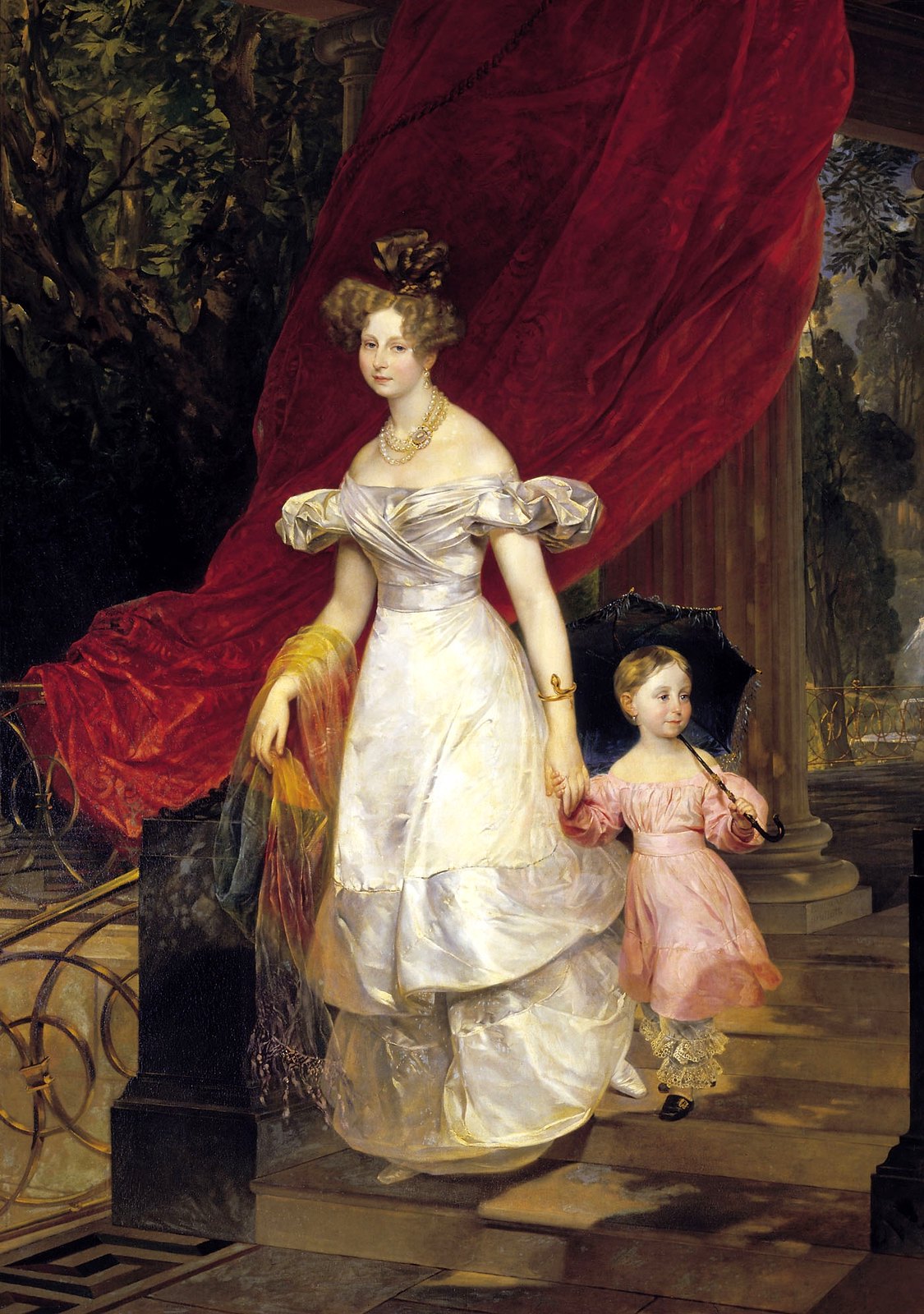 And so it was for Michael and Elena.

Both Michael and Elena outlived four of their five children. Only their third child, Grand Duchess Ekaterina Mikhailovna, outlived both her parents, living to the comparatively old age of 66.

There are stories all around us …


Sources
Wikipedia.org
Paul the First of Russia: The Son of Catherine the Great by Kazimierz Waliszewski