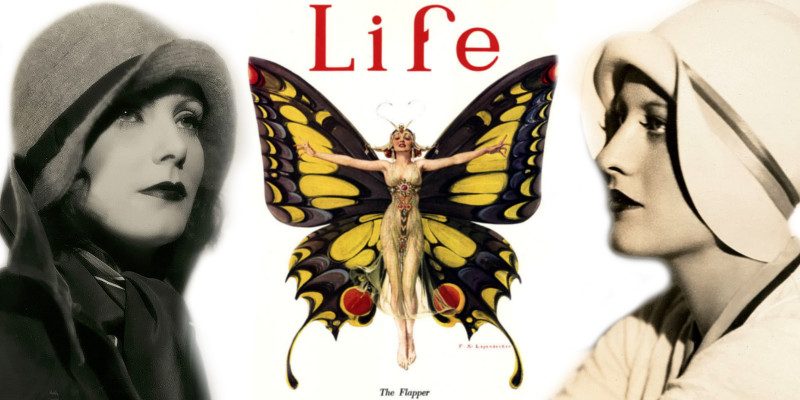 Dubbed the “Roaring Twenties” in Britain and America, the “Années folles” (Crazy Years) in France, and the “Golden Twenties” in Germany, the 1920s was a period of sustained economic growth and cultural exuberance that lasted from the end of World War I to the Wall St Crash of 1929.

Out went the rigid Victorian way of life and in came a break with traditions, a disdain for acceptable behavior, and a flouting of social and sexual norms.

Young, rebellious, middle-class women, labeled ‘flappers’ by older generations, did away with the corset and donned slinky knee-length dresses, which exposed their legs and arms.

Women everywhere spread their wings and flew free as if for the first time.

It was a glorious revolution for women’s fashion.

One of the first women to wear trousers, cut her hair and reject the corset was Coco Chanel.

The only fashion designer listed on Time magazine’s 100 most influential people of the 20th century, Coco Chanel emancipated women’s fashion.

One of Chanel’s signature techniques was to take simple designs inspired by service uniforms, riding habits, and even men’s clothing and create exquisitely tailored, expensive interpretations.

In 1926, American Vogue likened Chanel’s “little black dress” to the Ford Model T, alluding to its almost universal popularity as a fashion basic.

Paul Poiret once called her style “poverty de luxe,” to which Chanel replied, “simplicity does not mean poverty.”

The “little black dress” became one of Chanel’s most popular and enduring contributions to women’s fashion and inspired many simple designs that championed a modern lifestyle and attitude.

Carefully cut to follow the floral pattern of the textile, the dress hem and appliqués of chiffon on the jacket below exemplify Chanel’s excellence at soft tailoring.

Said to refer to a young bird flapping its wings while learning to fly, the slang word “flapper” had emerged in England in the late 19th century to describe lively mid-teenage girls.

But it could just as easily have referred to a dancer, flapping her wings to the Charleston dance moves of the Roaring Twenties.

Josephine Baker was one of many celebrities who embraced the flapper fashion movement, becoming a symbol of the jazz age of the 1920s.

Going on to star in the major motion picture in 1934—Marc Allégret’s Zouzou—she was the first person of African descent to become a world-famous entertainer.

Orphaned at the age of four and partially raised in foster homes, actress Barbara Stanwyck began her career as a dancer at the Ziegfeld Follies in the New Amsterdam Theatre on Broadway.

One of the most elegant and glamorous film stars of the roaring twenties, Norma Talmadge married a wealthy film executive who nurtured her career and with whom she started the Norma Talmadge Film Corporation.

Flocking to see her extravagant movies, women from around the world wanted to be Norma Talmadge.

Popularizing the bobbed haircut and noted as an iconic symbol of the flapper, American film actress and dancer Louise Brooks starred in iconic flapper movies of the late 1920s.

Pandora’s Box and Diary of a Lost Girl were considered shocking portrayals of sexuality and social satire.

Rising to stardom in silent films, Clara Bow rocketed to global fame in the 1927 romantic comedy “It” about an ambitious shop girl who wants to marry her handsome, wealthy boss.

Earning her the nickname “The It Girl”, the magnetic attraction she portrayed in the movie made her a sex symbol of the Roaring Twenties.

Besides sharing a love for Roaring Twenties fashion, what these women had in common was the flapper attitude captured in Russell Patterson’s famous illustrations—a confidence that helped empower women to defy traditional notions of their role in society and chart their own course.

The hairstyle of the decade was a chin-length bob, which had several popular variations.

But acceptance of shorter hair had been gaining ground during World War I.

With most men away fighting in Europe, women took over the factory work and soon came to realize just how impractical and dangerous longer hair was.

As early as 1915, dancer and fashion trendsetter Irene Castle had introduced her own version of the bob to a receptive American audience.

The flappers adopted the bob cut and didn’t look back for the entire decade.

Louise Brooks and Colleen Moore in particular started a trend that many women followed—short straight hair cut about jaw-level with a fringe or “bangs” at the front.

As its name implies, the bell-shaped cloche is derived from cloche, the French word for “bell”.

Usually made of felt to comfortably conform to the head, cloches were worn low on the forehead.

By the end of the 1920s, it became fashionable to turn the brims on cloche hats upwards.

A symbol of the Roaring Twenties, cloche hats became obsolete in the early 1930s.

Rapidly changing fashion meant a cornucopia of shoe designs were available in the 1920s.

High-heels were in vogue, even for dancing, necessitating straps over the instep.

Browns, greys and beiges dominated the first half of the decade, while crocodile, snake and lizard shoes became fashionable in the late 20s.

Pietro Yantorny (1874-1936), the self-proclaimed “most expensive shoemaker in the world”, was a consummate craftsman utterly devoted to the art of shoemaking.

He sought to create the most perfectly crafted shoes possible for a select and exclusive clientele.

The exuberance of the Roaring Twenties came crashing down with the Wall St collapse of Black Tuesday, October 29, 1929.

But the profound changes to western culture, especially women’s liberation and equal rights, continue to reverberate to this day.

Valentine’s Day in the Victorian Era