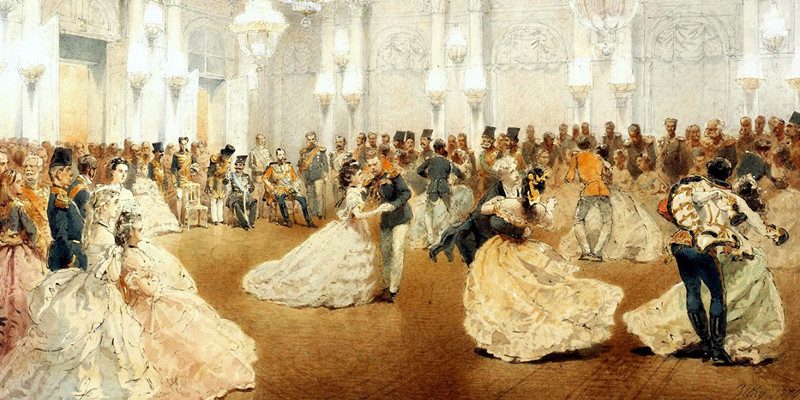 Delicately and exotically trimmed, and made of luxurious fabrics, ball gowns are the most formal female attire for social occasions.

Trimmed with lace, pearls, sequins, embroidery, ruffles and ruching, the most common fabrics are satin, silk, taffeta and velvet.

Cut off the shoulder with decollete necklines, the ball gown shape hasn’t changed much since the mid-19th century.

During the Regency era, ball gowns had the Empire silhouette, with a high waistline, short sleeves, and a fairly narrow skirt.

Widely adopted after the French Revolution, the neoclassic style originated from “chitons”—tubular garments of Ancient Greece that were draped over the shoulder and held in place with a brooch.

Drawing inspiration from the artistic notions of the Renaissance, the puffed sleeves resembled 16th-century “slashing”—a decorative technique of making small cuts on the outer fabric to reveal a brightly colored lining.

Embellished with gold thread or sparkling beads, these lavish gowns glittered in the candlelight of the dance hall.

Creating a soft dreamy look, the thin, gauzy materials were cooler to wear on the crowded dance floor.

In the Victorian era, skirts began to widen.

Layer upon layer of petticoats would provide the desired fullness but were hot and heavy to wear.

Undergarment frameworks called crinolines were developed to provide the flared look without the weight.

Inspired by the court of Charles II, this next ball gown was the most glamorous of all of Queen Victoria’s surviving clothes.

The rich brocade of the underskirt was woven in Benares, India.

A copy of seventeenth-century Venetian raised-point needle lace, the berthe (fichu) was likely made in Ireland and perhaps acquired at the Great Exhibition of 1851.

Crinolines remained popular throughout the 1850s and 1860s, reaching a circumference of up to six yards.

Beginning in the 1870s, a narrower silhouette came into vogue, and more attention was focused on the back of the skirt.

Trains would be drawn up behind the dress and fastened into a “bustle”.

By the end of the 19th century, bustles had fallen out of favour and skirts took on a simple bell-like appearance. Standing out from the crowd at a ball was a challenge even for the most well-heeled.

Densely sequined and beaded, this next gown worn by a member of the Astor family would have shimmered beautifully on the dance floor.

The Roaring Twenties and Beyond

During the 1920s, hemlines rose and decorations became more showy.

After the horrors of World War One, people wanted to let their hair down.

Women found a new sense of liberation from the traditional expectations of their role in society.

Formalities would take a back seat for a decade, but the dresses still glittered with glamour.

Every party eventually comes to an end.

After the end of World War II, Christian Dior spurred a new era of decadence with his “new look” of nipped-in waistlines and full skirts.

The 1950s was a golden age for ball gown design in Britain.