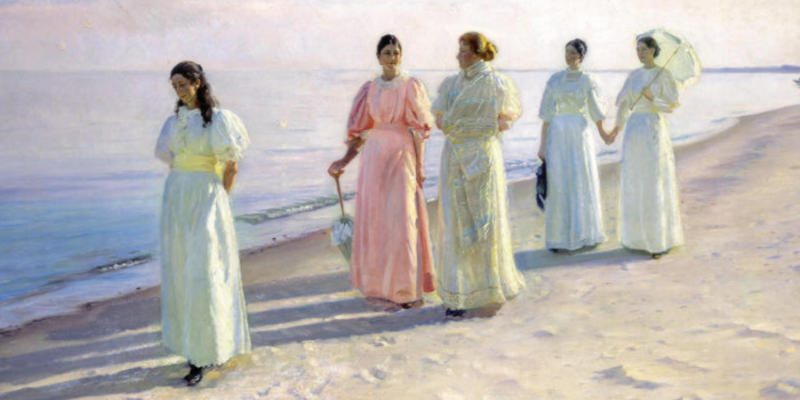 Skagen is a village in the northernmost part of Denmark.

From the late 1870s until the turn of the century, a group of Scandinavian artists descended on Skagen every summer.

It was the light that drew them.

A translucent light that merged the sea and the sky—especially during the evening “blue hour”.

Influenced by the “en plein air” techniques of French Impressionist painters like Claude Monet, they broke away from traditions taught at the academies and developed their own unique styles.

The long beaches stretched for miles and miles …

Listen to Claude Debussy’s haunting Clair de Lune as we travel back in time to late 19th-century Skagen through the eyes of the Skagen Painters.

Nor moon nor stars were out.
They did not dare to tread so soon about,
Though trembling, in the footsteps of the sun.
The light was neither night’s nor day’s, but one
Which, life-like, had a beauty in its doubt;
And Silence’s impassioned breathings round
Seemed wandering into sound.
Elizabeth Barrett Browning, A Sea-Side Walk
I have loved hours at sea, gray cities,
The fragile secret of a flower,
Music, the making of a poem
That gave me heaven for an hour
Sara Teasdale, I Have Loved Hours At Sea

Rendering light with paint in such a way that it makes you feel you are there and you need to squint at the sun’s reflections on the water.

One of the shared interests of the Skagen painters was to paint scenes of their own social gatherings—eating together, celebrating, or playing cards.

As if you could reach out and touch them, Krøyer’s characters are full of movement, full of life.

The group gathered together regularly at the Brøndums Inn in Skagen, which still operates as a hotel today.

Filled with the paintings the artists donated to cover the cost of board and lodging, the Brøndums’ dining-room became the center of their social life.

Can you feel the excitement in the air and hear the clinking of glasses?

Deep in concentration, an after-dinner game of cards continues into the small hours.

Many of the Skagen painters are depicted here enjoying Midsummer Eve celebrations on Skagen beach around a bonfire, traditionally lit to ward off evil spirits believed to roam freely when the sun turned southward again.

Anna Ancher was the only one of the Skagen Painters to be born and grow up in Skagen.

Her father owned the Brøndums Hotel where the artists stayed during the summer months and she married Michael Ancher, one of the first members of the Skagen colony of artists.

Expressing a more truthful depiction of reality and everyday life, she was a pioneer in observing the interplay of color and natural light.

They love the sea,
Men who ride on it
And know they will die
Under the salt of it
Carl Sandburg, Young Sea

Becoming known as monumental figurative art, his strict training at the Royal Danish Academy of Fine Arts was tempered by his wife Anna’s more naturalistic approach.

Painted in 1885, Michael Ancher’s ‘Will He Round the Point?” (below) earned him and the Skagen colony particular attention since it was sold to King Christian IX of Denmark.

Perhaps I should not have been a fisherman, he thought. But that was the thing that I was born for.Ernest Hemingway, The Old Man and the Sea

A fisherman’s life was not an easy one.

Better to die surrounded by people who would give their life for you.

That’s what close-knit communities were made of.

The Skagen artists also painted each other and their children going about everyday aspects of life—collecting flowers, walking the dog, reading in the shade of the garden or inside the house, meal times with the children, and saying prayers before bed.

The Real Gangs of New York

The History of Handbags — a 5-Minute Guide