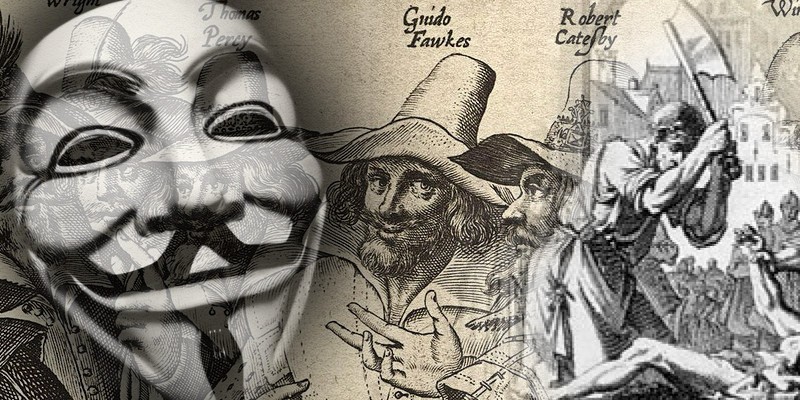 In 1605, a group of rural English Catholics from England’s heartlands banded together to hatch a plot to assassinate King James I and blow up the House of Lords during the State Opening of England’s Parliament on 5th November 1605.

English Catholics had been persecuted since Henry VIII separated the English Church from the Pope and became supreme head of an independent Church of England.

Following a five-year reprieve under Queen Mary from 1553, persecution of Catholics returned with Queen Elizabeth I. When Elizabeth died, new hopes of religious tolerance under her successor King James I of England and VI of Scotland were re-ignited.

But English Catholics would be sorely disappointed as repression continued under King James. The die was cast. King James and Parliament would have to be destroyed.

The plotters had leased a cellar beneath the House of Lords, where they had stockpiled gunpowder and wood. Guy Fawkes, who had 10 years of military experience, was put in charge of the explosives and would ultimately light the fuse.

An anonymous letter exposing the Gunpowder Plot reached authorities, who searched Westminster Palace the morning of 5th of November. There was Guy Fawkes, stood guarding the explosives.

When asked by one of the interrogators what he was doing in possession of so much gunpowder, Fawkes answered that his intention was,

to blow you Scotch beggars back to your native mountains.

Not the most diplomatic of answers, even though it oddly earned him the admiration of King James. But he would pay dearly for his insolence. In a letter of 6 November James wrote:

The gentler tortours [tortures] are to be first used unto him, et sic per gradus ad ima tenditur [and thus by steps extended to greater ones], and so God speed your good work.

The torture would be “light” at first, meaning using manacles (placed in handcuffs and hung from the wall), then becoming more severe and ending with the dreaded rack.

After a three-day stretch on the rack, Fawkes succumbed to the extreme pain and revealed the identities of his co-conspirators. The observer Sir Edward Hoby remarked,

Since Johnson’s being in the Tower, he beginneth to speak English.

Not for the Squeamish

If the victim was stretched too far on the rack, cartilage, ligaments or bones would snap and pop. Further tortures could be administered while the recipient was confined—burning with torches or candles, or tearing out fingernails and toenails with pincers. Racks often led to excruciating dislocations of shoulders, elbows, knees, wrists, and ankles.

Such was the cost of High Treason (criminal disloyalty to the state)—the most severe punishment available: hanging, drawing, and quartering. Perhaps it would more appropriately be termed “Drawn, Hanged, and Quartered” because that was the order of the humiliation, torture, and death:

Stage 1: drawn backward to the place of execution, by a horse, with their head nearest the ground.

Stage 2: hanged until nearly dead, genitals cut off and burnt before their eyes, and their bowels and hearts removed.

Stage 3: quartered (chopped into four pieces), decapitated and the dismembered parts of their bodies displayed so that they might become “prey for the fowls of the air”.

Put to death halfway between heaven and earth as unworthy of both.

One Last Stroke of Luck?

Having watched his co-conspirators mutilated, Fawkes was the last to take the scaffold. Weak from days of torture, Fawkes began to climb the ladder to be hanged until almost dead. His wits still about him, he jumped. Crack went his neck as he fell to his death and avoided the agony of the latter part of his execution. His lifeless body was cut into quarters and the body parts distributed to “the four corners of the kingdom” for public display as a deterrent. If you look closely at this image of the old London Bridge, you can see heads on display in the lower right corner, as was the custom for traitors.

Ever since that fateful day in 1605, Britons have celebrated “Guy Fawkes Night” and burned Guy Fawkes in effigy every November 5th, along with organized fireworks displays and often fairground attractions.

Faith and Treason: The Story of the Gunpowder Plot.

With her usual combination of careful scholarship and a nose for a good subject, Fraser has now told the plotters’ story. It is such a good yarn that one wonders why nobody has tried to popularize it before. — The New York Times Book Review, Michael Elliott.

In the Bleak Mid Winter