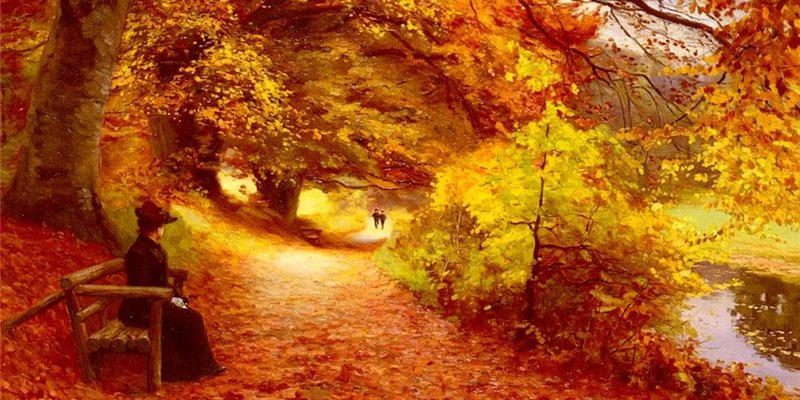 Autumn is a time of contemplation.

A time to reflect on the changing of the seasons from growth to decay.

Each year is a cycle of life that repeats.

Mother Nature bears the fruits of her labor, celebrating life in a festival of colour before the long winter months set in.

It’s as if nature is reminding us that life is to be enjoyed, that there is so much to be grateful for, and that we can look forward to renewal again in the spring.

Artists through the centuries have been inspired by the beauty and melancholy of autumn.

Here are 40 beautiful paintings of the season of red and gold along with quotes from poets and writers.

And the dead leaves lie huddled and still,
No longer blown hither and thither;
The last lone aster is gone;
The flowers of the witch-hazel wither;
The heart is still aching to seek,
But the feet question ‘Whither?’
Robert Frost, The Poetry of Robert Frost
Is not this a true autumn day? Just the still melancholy that I love – that makes life and nature harmonise. The birds are consulting about their migrations, the trees are putting on the hectic or the pallid hues of decay, and begin to strew the ground, that one’s very footsteps may not disturb the repose of earth and air, while they give us a scent that is a perfect anodyne to the restless spirit. Delicious autumn! My very soul is wedded to it, and if I were a bird I would fly about the earth seeking the successive autumns.George Eliot
The Sussex lanes were very lovely in the autumn . . . spendthrift gold and glory of the year-end . . . earth scents and the sky winds and all the magic of the countryside which is ordained for the healing of the soul.Monica Baldwin
There is a harmony in autumn, and a luster in its sky, which through the summer is not heard or seen, as if it could not be, as if it had not been!Percy Bysshe Shelley
Autumn Days
Yellow, mellow, ripened days,
Sheltered in a golden coating;
O’er the dreamy, listless haze,
White and dainty cloudlets floating;
Winking at the blushing trees,
And the sombre, furrowed fallow;
Smiling at the airy ease,
Of the southward flying swallow.
Sweet and smiling are thy ways,
Beauteous, golden Autumn days.
Will Carleton
Autumn wins you best by this its mute appeal to sympathy for its decay.Robert Browning
You expected to be sad in the fall. Part of you died each year when the leaves fell from the trees and their branches were bare against the wind and the cold, wintery light. But you knew there would always be the spring, as you knew the river would flow again after it was frozen.Ernest Hemingway, A Moveable Feast
I cannot endure to waste anything so precious as autumnal sunshine by staying in the house.Nathaniel Hawthorne, The American Notebooks
Her pleasure in the walk must arise from the exercise and the day, from the view of the last smiles of the year upon the tawny leaves and withered hedges, and from repeating to herself some few of the thousand poetical descriptions extant of autumn–that season of peculiar and inexhaustible influence on the mind of taste and tenderness–that season which has drawn from every poet worthy of being read some attempt at description, or some lines of feeling.Jane Austen, Persuasion
The tints of autumn…a mighty flower garden blossoming under the spell of the enchanter, frost.John Greenleaf Whittier
It was one of those days you sometimes get latish in the autumn when the sun beams, the birds toot, and there is a bracing tang in the air that sends the blood beetling briskly through the veins.P.G. Wodehouse
Season of mists and mellow fruitfulness,
Close bosom-friend of the maturing sun;
Conspiring with him how to load and bless
With fruit the vines that round the thatch-eves run
John Keats, Complete Poems and Selected Letters
Just as a painter needs light in order to put the finishing touches to his picture, so I need an inner light, which I feel I never have enough of in the autumn.Leo Tolstoy
Give me juicy autumnal fruit ripe and red from the orchard,Walt Whitman, The Complete Poems
All-cheering Plenty, with her flowing horn, Led yellow Autumn, wreath’d with nodding corn.Robert Burns, Complete Poems and Songs of Robert Burns
Such days of autumnal decline hold a strange mystery which adds to the gravity of all our moods.Charles Nodier, Smarra & Trilby
The goldenrod is yellow,
The corn is turning brown…
The trees in apple orchards
With fruit are bending down.
Helen Hunt Jackson
The gold and scarlet leaves that littered the countryside in great drifts whispered and chuckled among themselves, or took experimental runs from place to place, rolling like coloured hoops among the trees.Gerald Durrell, My Family and Other Animals
The one red leaf, the last of its clan,
That dances as often as dance it can,
Hanging so light, and hanging so high,
On the topmost twig that looks up at the sky.
Samuel Taylor Coleridge, Christabel
the fallen leaves in the forest seemed to make even the ground glow and burn with lightMalcolm Lowry, October Ferry To Gabriola
Every season hath its pleasures;
Spring may boast her flowery prime,
Yet the vineyard’s ruby treasures
Brighten Autumn’s sob’rer time.
Thomas Moore
In Heaven, it is always AutumnJohn Donne
Methinks I see the sunset light flooding the river valley, the western hills stretching to the horizon, overhung with trees gorgeous and glowing with the tints of autumn — a mighty flower garden blossoming under the spell of the enchanter, frost.John Greenleaf Whittier, Tales and Sketches
The leaves were more gorgeous than ever; the first touch of frost would lay them all low to the ground. Already one or two kept constantly floating down, amber and golden in the low slanting sun-raysElizabeth Gaskell, North and South
.
And every year there is a brief, startling moment
When we pause in the middle of a long walk home and
Suddenly feel something invisible and weightless
Touching our shoulders, sweeping down from the air:
It is the autumn wind pressing against our bodies;
It is the changing light of fall falling on us.
Edward Hirsch, Wild Gratitude