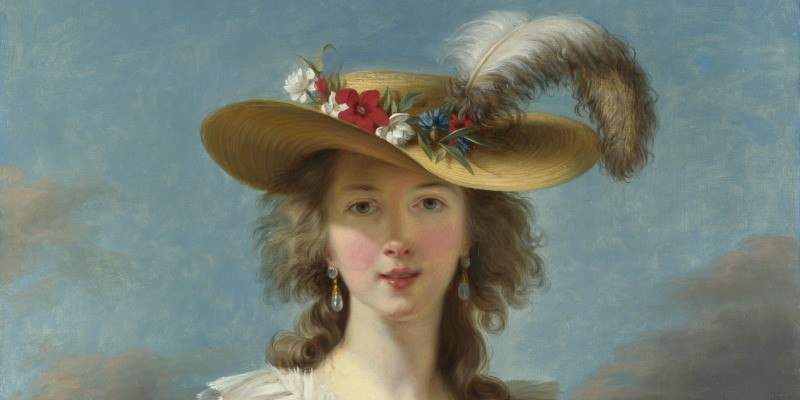 A story of joy and tragedy in an age of revolution.

Madame Lebrun’s ability to characterize her subjects in a flattering, stylish manner made her very popular.

So enamored was the queen with her work that she was hired to paint 30 portraits of Marie Antoinette and her family, earning her the reputation as the official portraitist.

A sensuous, radiant use of color, reminiscent of Rubens and Van Dyck marked Madame Lebrun’s unique style and gave her such alluring appeal.

A Mother’s Pride and Joy

In 1776 she married Jean-Baptiste Le Brun, an artist and art dealer, and four years later gave birth to a daughter, Jeanne Julie Louise, whom she called “Julie”.

I shall not try to describe the joy I experienced upon hearing the first cries of my child. All mothers know this exhilaration.

Julie was the apple of her mother’s eye. A pretty, happy little girl, whom her mother delighted in painting and sketching.

The work of an artist is demanding. And so it was for Madame Lebrun, who could not devote enough time to her daughter—something that would come back to haunt her in later life.

As revolution gripped France and fearing she would be condemned for her close association with the monarchy and nobility, Madam Lebrun left the country with her daughter.

Her husband and brother were briefly imprisoned, and following the execution of Marie Antoinette, her husband sued for divorce to save his life.

After traveling through several European countries and finding a warm reception among the foreign nobility who knew of her talent and social reputation, Madame Lebrun settled in Russia.

It was in St Petersburg that her daughter Julie married a Russian nobleman—Gaetan Bernard Nigris—much to her mother’s dismay.

She broke off relations with her daughter and eventually resettled in Paris in 1805 during the reign of Napoleon I.

As might be expected of the former portraitist to Marie Antoinette, she was not well received in France.

However, her artistic talent was much in demand elsewhere in Europe. She painted several prominent British figures including the poet Lord Byron.

In 1813, she learned that her former husband Jean-Baptiste LeBrun had died.

Soon after Waterloo, her daughter Julie was taken seriously ill.

Rushing to be by her side, all resentments forgotten, it was sadly too late.

The once pretty features of Julie were twisted by physical pain and she died shortly after.

Images of a happy girl that had been such a delight to paint, haunted Madame Lebrun.

Less than a year passed and her brother, Etienne, died.

She stayed in Paris until her death on 30 March 1842 when her body was taken back to Louveciennes and buried in a cemetery near her old home.

Madame Lebrun’s love of art was her constant companion through the best of times and the worst of times.

In her memoirs, she reveals her fascination with drawing:

My notebooks and those of my classmates were filled in the margins with sketches of little faces and profiles; on the walls of our dormitory, I drew little figures and landscapes with charcoal… during my playtime, I traced all sorts of images that came to my mind in the sand.

On her tombstone epitaph are the words, “Here, at last, I rest…”.

But her work lives on.