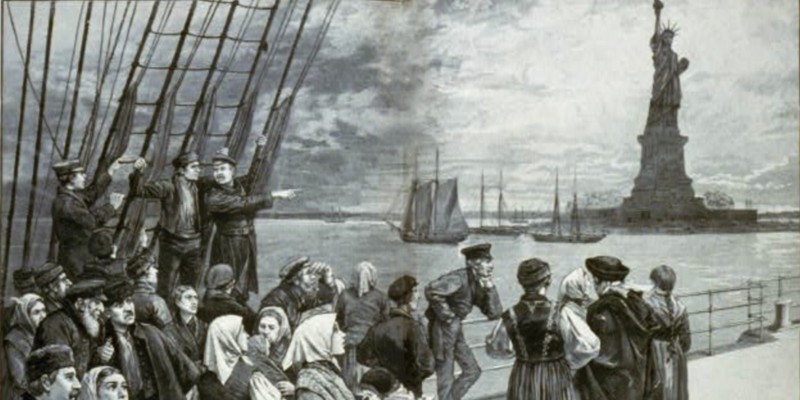 The story of the Statue of Liberty is one of the most compelling celebrations of freedom and democracy the world has ever known.

It was 1865. The American Civil War had just ended, and along with it, slavery abolished.

Across the Atlantic in France, two men sat engaged in an after-dinner conversation. One was French legal scholar and anti-slavery activist Édouard René de Laboulaye, and the other, French sculptor Frédéric Auguste Bartholdi.

Laboulaye had been thinking about ways to strengthen the relationship between France and the United States. But more than that, he hoped that by helping the US celebrate freedom and democracy, the French people would be inspired to rise up against what he saw as the repressive monarchy of Napoleon III.

“How fitting it would be if France and the United States could build a monument together to celebrate our solidarity for freedom,” Laboulaye said to Bartholdi.

“What a magnificent idea,” Bartholdi agreed. “Imagine a colossal statue of the Roman goddess Libertas—the very embodiment of Liberty.”

“Madame Liberté!” exclaimed Laboulaye.  “She could carry a torch and tablet inscribed with one of the most important dates in history—July 4, 1776.”

But France was fast approaching its own war—the Franco Prussian War of 1870. Madame Liberté would have to wait.

Lasting less than a year, the war came to an end in May 1871. Laboulaye got his wish, with France becoming a Republic. Bartholdi started work on the great statue.

Laboulaye envisioned France paying for the statue itself  and the US providing the pedestal.

First to be completed and exhibited was the torch-bearing arm, put on show in 1876 at the Centennial Exposition in Philadelphia and again in Madison Square Park, Manhattan from 1876 – 1882.

Can you imagine Lady Liberty’s arm on display for a whole six years in Manhattan? Such was the reality, as Americans hunted for funding to complete the pedestal.

It took a drive for donations by Joseph Pulitzer, publisher of the New York World newspaper before enough funds were gathered. 120,000 people contributed, with most paying less than a dollar.

Give me your tired, your poor, your huddled masses

Also contributing to the fund raising effort was a young American-Jewish poet by the name of Emma Lazarus. She wrote a heartwarming poem called “The New Colossus” which challenged the original philosophy of the great statue as being for shared republican ideals between the United States and France. Through her poem, Emma Lazarus offered a new vision for Madame Liberté, not as a monument to military might, but as a symbol of freedom, enlightenment, and compassion. A beacon of light where there was darkness. A land of hope where there was tyranny.

Not like the brazen giant of Greek fame
With conquering limbs astride from land to land;
Here at our sea-washed, sunset gates shall stand
A mighty woman with a torch, whose flame
Is the imprisoned lightning, and her name
Mother of Exiles. From her beacon-hand
Glows world-wide welcome; her mild eyes command
The air-bridged harbor that twin cities frame,
“Keep, ancient lands, your storied pomp!” cries she
With silent lips. “Give me your tired, your poor,
Your huddled masses yearning to breathe free,
The wretched refuse of your teeming shore,
Send these, the homeless, tempest-tossed to me,
I lift my lamp beside the golden door!”
—Emma Lazarus

Constructed in France, then shipped in crates to Liberty Island—then known as Bedloe’s Island—assembly of the great statue on the completed pedestal began in May, 1886.

Presided over by President Grover Cleveland, the great statue of Bartholdi was opened in 1886. New York held it’s first ticker-tape parade to celebrate.

Millions and millions have since come through New York Harbor from every corner of the globe, gazing upon the outstretched arm of the Statue of Liberty and dreaming of a new life.

Not war and conquest, but freedom enlightenment and compassion.
—Alicia Ostriker

The Tragic Story of Princess Ka’iulani, “The Island Rose” of Hawaii

Edward I – The Lord of the Ring of Welsh Castles

The Dancers of Degas