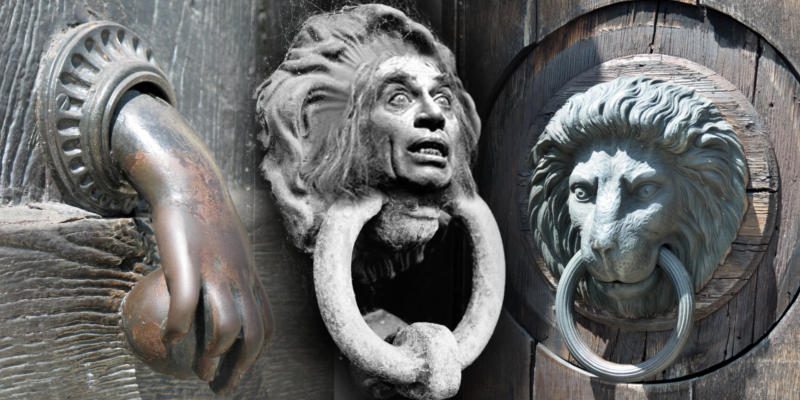 For anyone living in the United Kingdom, there is one door knocker that is the most powerful in the land.

Door knockers are more popular in England than in any other country and can be found everywhere, even in the most remote locations.

But the history of door knockers begins several thousand years ago in Ancient Greece.

Greeks were a bit picky about unannounced visits to their dwellings, and it was considered a breach of etiquette to enter without warning.

Where Spartans would simply shout their arrival, the more sophisticated Athenians preferred to use a door knocker.

Doors had replaced hangings to provide better safety and privacy, and upper class Greeks had slaves whose sole purpose was to answer the door.

It’s a bit like having a butler, but one that was chained to the door to prevent them wandering off. If they didn’t die of boredom, they’d fall asleep, and so to wake them up, visitors rapped the door with a short bar of iron attached to a chain.

It wasn’t long before some Greeks realized the short bar made a good weapon with which to attack the householder. So property owners fought back with new technology.

The knocker evolved into a heavy ring fastened to the door by a plate—dual purpose knocker and handle!

Adopting the Greek custom, the Romans spread the use of door knockers to the farthest reaches of their empire.

While the heavy ring remained until around the 15th century, blacksmiths became adept at working various forms onto the back plate.

And along with the Renaissance came the greatest embellishments to design of the hammer—as craftsmen saw the artistic possibilities beyond mere utility.

Some of the most elaborate examples can be found in Italy, England, and Germany.

Dating from the 11th century, the knocker at Durham Cathedral holds a special significance under English common law.

As far back as 740,  Cynewulf, the Anglo-Saxon Bishop of Lindisfarne, offered sanctuary to any criminal who could reach the White Church at Durham—later replaced by Durham Cathedral—and strike the knocker.

Housed, fed, and kept safe from capture for 37 days, the criminal was either pardoned or taken to a place of refuge far from the scene of the crime.

This practice was lawful for hundreds of years until it was overturned by parliament in 1623.

One of the most enduring themes for knockers has been the lion’s head.

Traditionally regarded as the king of beasts, the lion’s head symbolizes bravery, nobility, strength, and valor.

Lion’s head knockers were popular in the American colonies up until the revolution when the Eagle took precedence.

Thought to originate from the Hand of Fatima—a palm-shaped amulet used to protect against evil—hand-shaped knockers are common in countries bordering the Mediterranean whence they spread to neighboring countries.

Shakespeare may have been the inspiration for the “knock knock” joke craze that swept America and England in 1936 with the famous “porter scene” in Macbeth, in which Macduff and Lennox knock at the castle gate:

That was some scary knocking! What must the door knocker have looked like? One of these designs from European castles, perhaps?

Contains affiliate links
And who can forget the haunting scene in Charles Dickens’ A Christmas Carol in which Scrooge’s door knocker morphs into an apparition of Jacob Marley?

How about ending with a knock knock joke? Groan …

Knock knock
Who’s there?
Theodore!
Theodore who?
Theodore wasn’t open, so I knocked.

The Art of Autumn