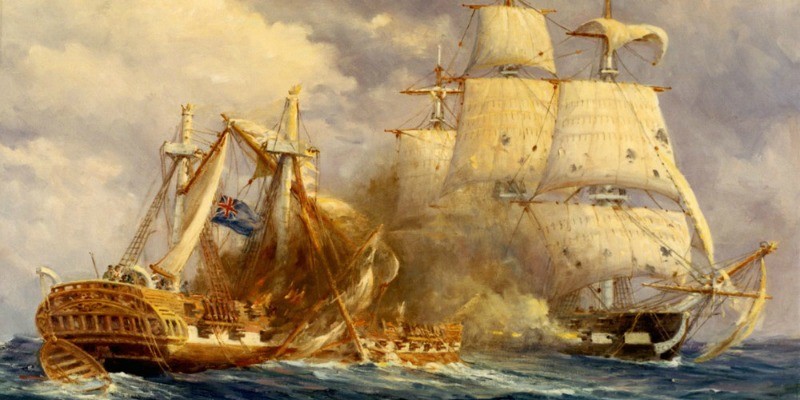 In 1785, pirates off the Barbary Coast (what is now Morocco, Algeria, Tunisia, and Libya), were seizing American merchant vessels and holding the crew ransom.

In response, Congress passed the Naval Act of 1794 to build six frigates that would accompany and protect American merchant shipping in the Meditteranean.

This allowed for much heavier planking and thus greater hull strength than frigates of the time.

Humphreys realized that the United States could not match the number of ships deployed by European navies. So he set about designing ships that could outgun and outrun them.

Humphreys’ designs would soon be put to the test.

The British Navy had been harassing US ships and pressing US sailors into serving in the Royal Navy.

So the United States of America declared war on Great Britain for “intolerable grievances” in what became known as the War of 1812.

The British Royal Navy was the strongest in the world at that time.

Surely this was suicide for the US. Far from it.

The War of 1812 was probably the greatest chapter in US history—and the USS Constitution played a pivotal role.

It was August 19 when British frigate Guerriere was spotted from the lookout on board Constitution.

Too late—Guerriere opened fire but did little damage.

Astonishingly, many of the British shots rebounded harmlessly off Constitution‍’s hull.

An American sailor reportedly shouted “Huzzah! her sides are made of iron!” and so stuck the nickname “Old Ironsides”.

Captain Hull maneuvered Constitution to within 25 yards (23 m) of Guerriere and ordered a full double-broadside of grape and round shot, taking out Guerriere’s mizzen-mast (third mast).

Guerriere‍ could no longer maneuver effectively and she collided with Constitution, her bowsprit entangled in rigging.

Her foremast fell, then the mainmast collapsed. It was all over.

Guerriere was a floating hulk, while Constitution was largely intact.

The British surrendered. The news of Constitution’s victory traveled fast and on arriving back in Boston on 30 August, Hull and his crew were hailed as heroes.

On September 16, 1830, “Old Ironsides” was scheduled to be decommissioned.

Oliver Wendell Holmes wrote a poem that captured the public imagination and helped save her from being scrapped.

Constitution is now the oldest commissioned ship in the world still afloat.

Aye tear her tattered ensign down Long has it waved on high, And many an eye has danced to see That banner in the sky; Beneath it rung the battle shout, And burst the cannon’s roar;– The meteor of the ocean air Shall sweep the clouds no more. Her deck, once red with heroes’ blood, Where knelt the vanquished foe, When winds were hurrying o’er the flood, And waves were white below, No more shall feel the victor’s tread, Or know the conquered knee;– The harpies of the shore shall pluck The eagle of the sea! Oh, better that her shattered hulk Should sink beneath the wave; Her thunders shook the mighty deep, And there should be her grave; Nail to the mast her holy flag, Set every threadbare sail, And give her to the god of storms, The lightning and the gale!’Oliver Wendell Holmes

Today, the mission of Constitution‍ is to promote understanding of the Navy’s role in war and peace through educational outreach, and public events.