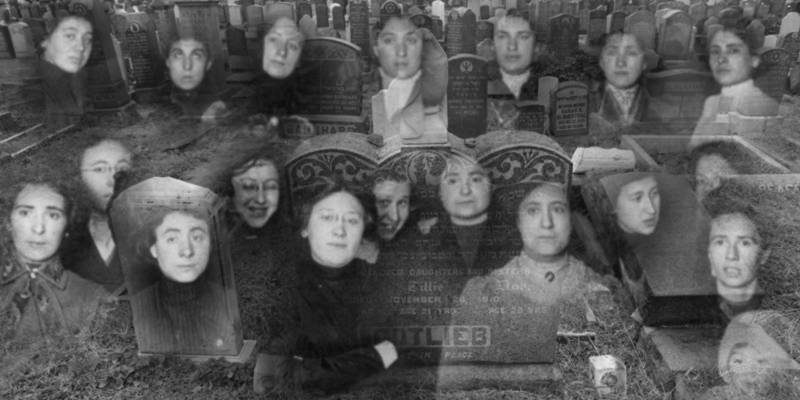 This is the tragic story of how 146 immigrant workers—mostly young women—lost their lives in one of the worst industrial disasters in US history.

Popular in the Edwardian Era—the period of Downton Abbey and Titanic—the shirtwaist was a woman’s tailored garment with design details copied from men’s shirts.

Constructed of shirting fabric, sometimes with turnover collar and cuffs and a buttoned front, shirtwaists could be highly ornamented with embroidery and lace.

One of the best-known factories making shirtwaists was the Triangle Shirtwaist Factory in New York City.

Housed in the beautiful neo-Renaissance 10-story Asch Building, the iron-and-steel structure was said to be “fireproof” and attracted many other garment makers.

Russian immigrants Max Blanck and Isaac Harris set up shop on the top three floors of the Asch Building and hired 500 workers—mostly female Jewish and Italian immigrants, about half of whom were not yet twenty years old.

But they were docked pay both for errors and the needles and thread they consumed, which was sometimes more than they were paid.

Overcrowded, with few working bathrooms and no ventilation, conditions ranged from sweltering in summer to freezing in winter.

Packed with inflammable objects, including clothing hanging from lines above workers heads and cuttings littering the floors, unsurprisingly, the Asch Building did not comply with several safety regulations.

With an improperly installed water hose, no sprinklers, a fire escape unable to withstand the weight of many people and dangerously dark stairwells, the Asch Building was a disaster waiting to happen.

In June of 1909, a fire prevention specialist sent a letter to the owners to discuss ways to improve safety in the factory.

In addition, there was no limit set for how many workers could occupy each floor, leading to very cramped conditions.

Only one bathroom break was allowed in a 14 hour day, forcing many to find ways to relieve themselves on the factory floor, only exacerbating the already unsanitary conditions.

It seemed that nobody noticed and nobody cared about their plight.

So the brave young ladies went on strike. They rose up to fight for change.

Supported by the National Women’s Trade Union League of America (NWTUL), the strike began in November 1909.

I have listened to all the speakers, and I have no further patience for talk. I am a working girl, one of those striking against intolerable conditions. I am tired of listening to speakers who talk in generalities. What we are here for is to decide whether or not to strike. I make a motion that we go out in a general strike.Clara Limlich

20,000 workers walked off the job in an industry-wide strike that was the largest single work stoppage in the US up to that time.

Money talks, as they say …

Ann Morgan, daughter of the wealthy financier JP Morgan (who would later bail out the banks in the Wall St Crash of 1929), took up the cause of the garment workers.

Joined by Alva Vanderbilt Belmont, the multi-millionaire American socialite and a major figure in the women’s suffrage movement, most small factory owners gave in to worker demands fairly quickly.

But not Blanck and Harris of the Triangle Shirtwaist Factory.

They hunkered down to play hardball.

Hiring prostitutes and ex-prizefighters to pick fights with the picketers, the police were bribed to arrest any who fought back and dragged them off to court bruised and bloodied.

Even judges were bribed to find picketers guilty.

But the women stood defiant.

By February of 1910, the union settled with the factory owners, gaining improved wages, working conditions, and hours.

In a scrap waste bin under one of the cutter’s tables on the 8th floor, smoke started to rise, which quickly flared into a fire at about 4:40 pm.

Five minutes later, a passerby saw smoke coming from the 8th-floor windows and raised the alarm.

Meanwhile, a bookkeeper on the 8th floor telephoned upstairs to the 10th floor to warn employees, but there was no audible alarm bell and no way to contact workers on the 9th floor.

Several exits, two freight elevators, a fire escape, and a stairway down to street level were all blocked by flames.

Another stairway down to Washington Place was the trapped workers’ only chance, but it was locked.

Managers made a habit of locking doors so they could check the women’s purses before they left each night.

It also made it easier for the foreman to control the workers’ break times.

Where was the foreman? He had the key—and with it, their escape to safety.

He’d long since escaped by another route to his own safety.

Dozens took a stairway to the roof, but within minutes it collapsed under the heat and overload.

Twenty people spiraled 100 ft to their deaths on the concrete sidewalk beneath.

I learned a new sound that day, a sound more horrible than description can picture—the thud of a speeding living body on a stone sidewalkWilliam Gunn Shepard, reporter

Operators of the elevator, Joseph Zito and Gaspar Mortillalo were the only heroes to be found and they made three return journeys up to the 9th floor risking their own lives to save others.

They had to be quick since the elevator rails started to buckle under the heat.

Some women desperately pried open the elevator doors and jumped into the shaft trying to slide down the cables.

But their bodies fell, lifeless, onto the elevator car and made it impossible to make another return trip.

The reassuring sound of the firefighters rang out in the smokey air.

But their ladders were only long enough to reach the seventh floor and the workers were trapped on the ninth.

Workers had no choice but to jump or burn to death.

Crowds gathered, watching in horror as bodies came hurtling down to certain death.

Louis Waldman, a New York Socialite was sitting reading in the nearby Astor library,

I was deeply engrossed in my book when I became aware of fire engines racing past the building. I ran out to see what was happening … When we arrived at the scene, the police had thrown up a cordon around the area. Horrified and helpless, the crowds — I among them — looked up at the burning building, saw girl after girl appear at the reddened windows, pause for a terrified moment, and then leap to the pavement below, to land as mangled, bloody pulp. Occasionally a girl who had hesitated too long was licked by pursuing flames and, screaming with clothing and hair ablaze, plunged like a living torch to the street.

146 souls died that day as a result of the fire.

Did 146 people needlessly die in the Triangle Shirtwaist fire?

Some say it was a discarded cigarette butt that started the fire.

Others that it was the engines running the sewing machines.

Owners Blanck and Harris had fled to the roof for safety when the fire began.

They were initially charged with first- and second-degree manslaughter.

But a good defense lawyer can find holes in any case.

He argued that witnesses were told what to say and that the owners didn’t know the exit doors were locked.

Commuted to wrongful death, plaintiffs were awarded $75 per victim in a civil suit.

That was the going rate for the life of an immigrant factory worker in 1911.

The insurance company paid Blanck and Harris about $60,000 more than the reported losses, or about $400 per casualty.

Tragedy bleeds some and benefits others.

The Colorful Shoes of the 18th Century