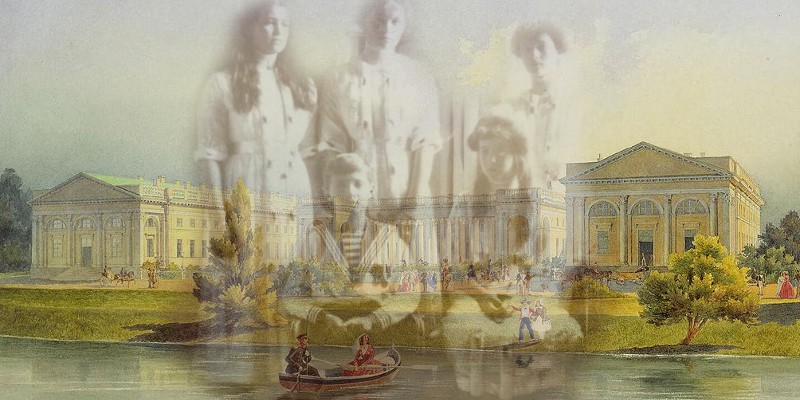 Nicholas was born there on 18 May 1868. His father, then Tsarevich Alexander, recorded the event in his diary,

God sent us a son whom we named Nicholas. What a joy it was! It is impossible to imagine. I sprang to embrace my darling wife, and she instantly became cheerful and was terribly happy. I had been weeping like a child but suddenly my heart became light and cheerful.

But after the Russian Revolution of 1917, it would become a prison for Nicholas and his family.

When Nicholas II inherited the Russian throne from his father, who died at just 49, he was not ready for the huge responsibility. He told a close friend,

I am not prepared to be a tsar. I never wanted to become one. I know nothing of the business of ruling.

He quickly married Princess Alexandra Feodorovna and the couple had their first child, Olga, in 1895.

The following year, at his formal coronation, thousands of people were trampled to death as the crowd of 100,000 rushed to get a share of free food and beer.

Nicholas was advised to attend a gala with the French ambassador that same evening—a bad omen as the city mourned its dead and saw him as uncaring.

By 1901, Alexandra had given him another three daughters—Tatiana, Maria, and Anastasia. Then in 1904, she gave birth to their only son Alexei. That same year, Japan attacked Russia.

Nicholas’s mismanagement resulted in multiple defeats and the loss of the Russian fleet. In 1905, a large but peaceful demonstration ascended on St Petersburg to appeal to Nicholas for improved working conditions.

Troops fired on the crowds and over 1000 were killed. It would be called “Bloody Sunday”.

The family moved from the official residence of the Winter Palace in St Petersburg to the safer confines of Alexander Palace. They remodeled much of he interior and added modern conveniences like telephones, an elevator, and a screening booth for watching movies.

Over the course of WWI, Russia endured major losses on the war front and suffered abject poverty and high inflation at home. The Russian public laid the blame squarely on the monarchy.

On 15 March 1917, Nicholas II abdicated the throne and was placed under house arrest, initially at Alexander Palace.

What did those last months feel like for the Romanovs? Did Nicholas even believe they were in danger? Alexei’s tutor, Pierre Gillard wrote,

In their spare time, free from studies, the Empress and her daughters were engaged in sewing something, embroidering or weaving, but they were never idle…They cleaned paths in the park from snow, chopped ice for the cellar, cut dry branches or old trees, storing firewood for the future winter. With the arrival of the warmer weather, the entire family worked on an extensive kitchen-garden.

In August 1917 they were transferred out of their beloved palace. Less than a year later, the entire family would be brutally executed. If their ghosts could choose, they would have returned home to the beautiful Alexander Palace.

The Romanov Sisters: The Lost Lives of the Daughters of Nicholas and Alexandra

“The public spoke of the sisters in a gentile, superficial manner, but Rappaport captures sections of letters and diary entries to showcase the sisters’ thoughtfulness and intelligence. Readers will be swept up in the author’s leisurely yet informative narrative as she sheds new light on the lives of the four daughters.”―Publishers Weekly (starred review).

The Family Romanov: Murder, Rebellion, and the Fall of Imperial Russia (Orbis Pictus Award for Outstanding Nonfiction for Children (Awards))

“A remarkable human story, told with clarity and confidence.”—Kirkus starred review.
“A wonderful introduction to this era in Russian history and a great read for those already familiar with it.”—Publishers Weekly starred review.

The Romanovs: the Final Chapter

The Romanov Cross: A Novel

“Compelling . . . The book grabbed me from the start and never really let go. . . . If you are looking for a good thriller with overtones of the end of the world then this one certainly has enough to keep you glued to your seat.”—The Big Thrill.

10 Fascinating Facts About the Belle Époque

Was Victorian Weather Cooler Than Today?