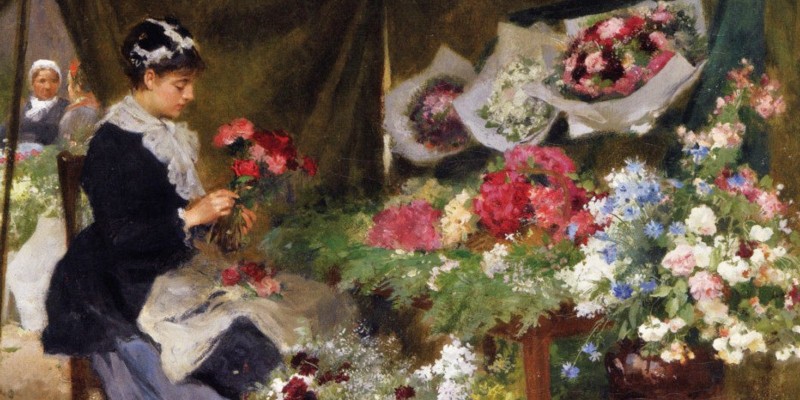 For Victorians, flowers were the language of love.

Proclaiming feelings in public was considered socially taboo, so the Victorians expressed intimacy through flowers.

Myriad market stalls and street sellers sprang up to cater to the Victorians’ need to communicate covertly.

Learning the particular meanings and symbolism assigned to each flower gave Victorians a way to play the subtle game of courtship in secret.

Coded into gifts of blooms, plants, and floral arrangements were specific messages for the recipient, expressing feelings that were improper to say in Victorian society.

Alongside the language of flowers was a growing interest in botany.

Dedicated to the “language of flowers” were hundreds of guide books, with most Victorian homes owning at least one.

The appearance or behavior of plants and flowers often influenced their coded meanings.

A white violet meant “innocence” while a purple violet said that the giver’s thoughts were “occupied with love” for the recipient.

Some plants were used to send negative messages.

Sending and receiving flowers was a way to fend off or attract suitors.

If a suitor declared his devotion by sending a rose, or showed his preference with apple blossom, the recipient could respond with a yellow carnation to express disdain or straw to show a request of union.

To express adoration, a suitor would send dwarf sunflowers.

Myrtle symbolized good luck and love in a marriage.

At her wedding in 1858, Princess Victoria, the eldest child of Queen Victoria, carried a sprig of myrtle taken from a bush planted from a cutting given to the Queen by her mother-in-law.

Thus began a tradition for royal brides to include myrtle in their bouquets.

In the royal wedding of 2011, Catherine Middleton included sprigs of myrtle from Victoria’s original plant in her own wedding bouquet.

Decorative “posy holders” with rings or pins allowed them to be worn and displayed by their owners.

The film versions of Oliver! and My Fair Lady made the London flower sellers famous, but their life was far harsher than their Hollywood depictions.

So high was the demand for flowers that it created many opportunities for street traders and the exploitation of child labour.

Victorian social researcher Henry Mayhew wrote about flower sellers in his book London Labour and the London Poor, 1851—a groundbreaking and influential survey of the city’s poor:


Sunday is the best day for flower selling, and one experienced man computed, that in the height and pride of the summer four hundred children were selling flowers on Sundays in the streets. The trade is almost entirely in the hands of children, the girls outnumbering the boys by more than eight to one. The ages of the girls vary from six to twenty, few of the boys are older than twelve, and most of them are under ten. They are generally very persevering and will run along barefooted, with their, “Please, gentleman, do buy my flowers.  Poor little girl!” or “Please kind lady, buy my violets. O, do! please!  Poor little girl!   Do buy a bunch, please, kind lady!”