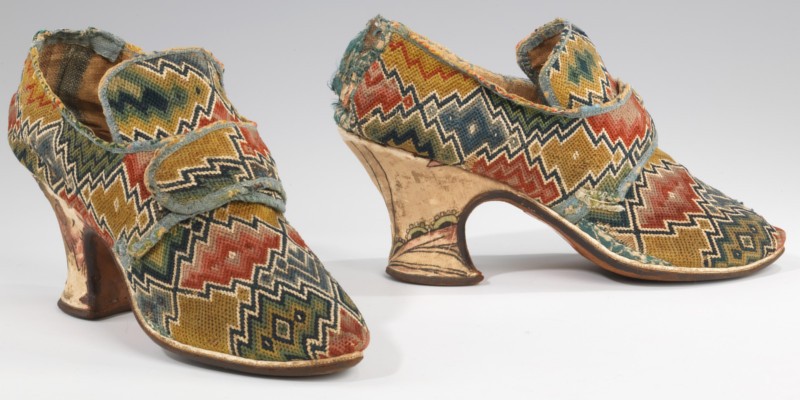 Adorned with decadent decorative arts and steeped in affectation, it’s no surprise that the French Court led European preference for elaborate clothing and accessories—everything from luxurious wigs to the colorful shoes of the 18th century.

Just as the formal ladies’ Robe à la Francaise showcased lavish embroideries and silk damask fabrics, so too did footwear display the very best of the era’s woven artistry.

Both ladies and gentlemen were expected to be fluent in fine arts, music, and dancing and behave with the utmost grace and poise.

This exuberance was no less manifested in the footwear of the period—the colorful shoes of the 18th century.

Trending toward the lighter floral decoration of Rococo in the first quarter of the 18th century, the predecessor to the classic buckle was the latchet tie (shown below).

When buckles did become available later in the century, they were often retrofitted to latchet tie shoes to extend their life.

“Bargello” or flame stitch was an embroidery style most commonly used for upholstery and personal accessories, but also for shoes.

The bold zigzag wool canvas pattern shown below extends to the heels, which was unusual for the time—more often being silk or leather.

Wel-established in the 17th century and continuing into the 18th was a decorative style of braid with multiple parallel rows.

Ties were still in fashion and were the main method of closure until the buckle was introduced later in the century.

Inspired by an Indian floral design, this pair of ladies shoes (below) shows the penchant for patterned fabrics.

Ladies would sometimes embroider the upper themselves and take it to a shoemaker to be made into shoes. Published in ladies magazines, embroidery patterns had become popular by the last quarter of the 18th century.

Eye-catching textile designs were a favorite choice of aristocratic ladies.

The red heel and white strip along the shoe’s front edge coordinate well with the uppers.

A wide metallic ribbon down the center of the vamp was a popular decoration of the period.

Popular for about 100 years, striped braid is shown below toward the end of its fashionable period in the monochrome preference.

Despite a buckle that would hide the intricate pattern, the braided tongue was fashioned with an attractive star design.

The higher, more upright heel and blunt toe—free from the upturn of earlier designs—shows the progression of fashion through the 18th century. Gone is the metallic decoration down the vamp’s center, but of note is the unusual printed silk adorning the heel.

Fashionable from the late 1770s were pointed tongues—sometimes reworked from an original square tongue as shown below.

Increasingly favored as the 18th century progressed were simpler, lighter textile designs. In this case, the silk uppers have been carefully cut to show off the brocaded motifs.

Plainer than ladies shoes, those of gentlemen did, however, have decorative aspects. Red heels were a favorite among aristocrats—a style inherited from the French courts of the 17th century.

Embodying the pointed toe and tongue from ladies styles, this rare pair of children’s shoes (below) is in unusually good condition.

This type of flat-heeled shoe was common among boys and girls, although the bright color suggests they complemented the more colorful feminine dress of the period.

4 Events on the Same Day in History