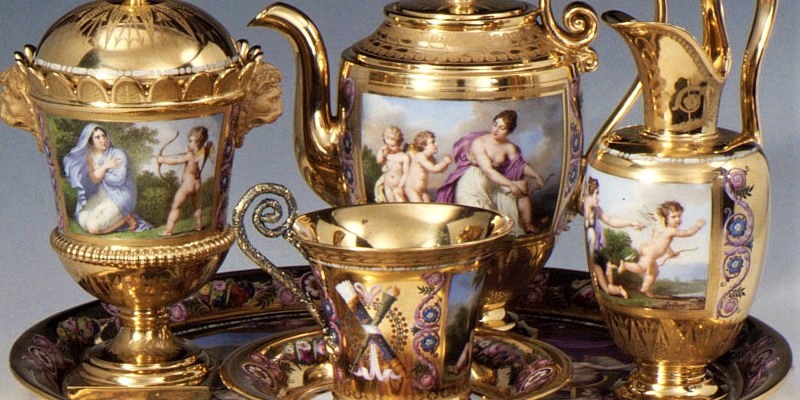 Despite a turbulent century of changing taste and technology, Sèvres Manufatory in the suburbs of Paris remained at the forefront of European ceramic production throughout the 1800s.

Founded in Vincennes in 1740 and relocated to Sèvres in 1756, King Louis XV, who had been an early investor, took possession in 1759.

With the French Revolution in 1789 came changing fortunes, with the factory losing many aristocratic patrons. It’s future looked in doubt.

Then, in 1800, along came engineer and scientist, Alexandre Brongniart (1770–1847), to run the troubled enterprise. The turnaround couldn’t have been more dramatic.

During the first decade of Brongniart’s tenure, the Empire taste was in vogue, with abundant use of gilding, rich borders, and ornate figural scenes.

According to factory archives, the process of decoration began with the blue ground of the border followed by the marbled center ground, requiring two layers. Gilding for the border was then applied with the figure in the center painted last.

To celebrate the coronation of King Charles X in 1825, a dinner set was produced, painted with famous views from each of France’s départements (administrative offices).

Decorated with scenes of cacao cultivation to make drinking chocolate, this coffee service from 1836 shows how Brongniart used themes related to the objects’ purpose.

Enormous variety in object type and decoration were hallmarks of Sèvres Manufactory. In the first half of the 19th century alone, it produced 92 different vase designs, 89 cups, every form of dinner, dessert, tea, and coffee service, as well as jugs, basins, and toiletry items.

Characteristic of nineteenth-century decorative arts was the reinterpretation of historical styles. While the form of this cup derives from Renaissance Italy, the use of vibrant reds, greens, blues, and yellows contrasts with the muted whites and browns of earlier wares.

Evoking the medieval Gothic style was another obsession of the 19th century. These vases illustrate the playfulness of mixing Gothic inspiration with Renaissance enamel techniques to achieve new aesthetic effects.

Eclecticism of design influences was matched by exuberance. This Chinoiserie tea and coffee service evokes the forms and motifs of China and the Near East.

Blending Asian forms with European decoration expressed a fascination with exoticism. The scrolling feet, double-walled forms, and simulated bamboo handles were found on Chinese porcelains sold in Paris in the 1820s.

Intended as the focal point of an elaborate table centerpiece during the dessert course, this ambitious fruit or flower basket imparts a sense of the grandeur of nineteenth century dining.

Presented to the winner of first prize at the Exposition Universelle of 1878, this cup, made in a Renaissance-revival style drew much criticism at a time when tastes were changing toward modernism.

One critic wrote “the colors are insipid and often vulgar; the decoration rarely quits the beaten track of the usual Sèvres flower and figure subjects. Sèvres is lingering in the traditions of the past. It remains deaf to the fame of living and modern art.”

But it was the Art Nouveau movement that was the nail in the coffin for the traditional historicism that had been the trademark of Sèvres throughout the 19th century.

Decorative arts moved closer to nature, often capturing the asymmetry of natural forms, as evident in this coffee service from c. 1900.

Employing the form of a fennel plant, the application of enamel to the unglazed porcelain created a matte surface similar to the plant’s actual texture, and heightened the sense of realism.

Sèvres was exploring techniques that would define the ceramics industry in the 20th century.