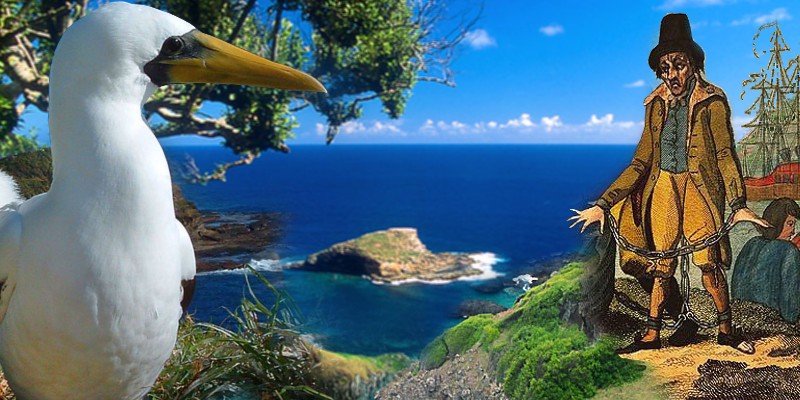 Does a tiny Australian island in the South Pacific with evergreen pines, jagged cliffs, pure blue waters, and sandy beaches sound like your idea of paradise? Welcome to Norfolk Island—site of an 18th-century penal colony.

A remote island paradise in the South Pacific—looks wonderful, doesn’t it? But it wasn’t so great for the convicts sent here from England in the 18th century. Norfolk Island served as a penal colony from 1788 until 1855.

Captain James Cook was the first European to set foot on Norfolk Island in October 1774, as part of his second voyage to the South Pacific. He named the island after Mary Howard, Duchess of Norfolk (c. 1712 – 1773).

Such were the challenges of receiving news at sea for 18th-century explorers, that at the time Cook named the island after her, the Duchess had been dead for 18 months.

Exactly where is Norfolk Island? Think “remote” and you’ll be close. On a map of the globe, it appears as a tiny speck somewhere east of Australia and northwest of New Zealand.

In 1786, Catherine the Great of Russia announced she was restricting sales of hemp and flax to English buyers. At the time, Britain’s Royal Navy was heavily dependent on flax for making sails, and hemp for ropes—any constraints on their supply threatened Britain’s sea power.

In a letter from Comptroller of the Navy Sir Charles Middleton to then Prime Minister William Pitt, he explained,

It is for Hemp only we are dependent on Russia. Masts can be procured from Nova Scotia, and Iron in plenty from the Ores of this Country; but it is impracticable to carry on a Naval War without Hemp.

Contains affiliate links
The potential to provide an alternative source for hemp and flax is argued by some historians, notably Geoffrey Blainey in Tyranny of Distance, as one of the main reasons Britain used Norfolk Island as a penal colony.

Should England cease to render her services to the Empress of Russia, in a war against the Turks, there can be little of nothing to fear from her ill-will. England will speedily be enabled to draw from her colonies the staple of Russia—hemp and flax.

Sir John Call, 1st Baronet (1731 – 1801) was a member of parliament and former chief engineer with the East India Company. Upon learning that flax grew in abundance on Norfolk Island, he proposed that the island be colonized as quickly as possible.

send a party to secure Norfolk Island as soon as Circumstances may admit of it…. to prevent its being occupied by the Subjects of any other European Power.

And so on 6 March 1788, colonization of Norfolk Island began with a party of 15 convicts and seven free men.

During the first year of the settlement, more convicts and soldiers arrived from Australia. A letter from an Officer of Marines was published in a London newspaper:

The island is fully wooded. Its timber is in the opinion of everyone the most beautiful and finest in the world…they are most suitable for masts, yards, spars and such. The New Zealand flax-plant grows there in abundance. European grains and seeds also thrive wonderfully well on Norfolk Island.

Norfolk Island was reserved for “the worst description of convicts“, which usually meant anyone convicted twice of a crime—”doubly-convicted capital respites“—or convicts who were sentenced to death for committing fresh colonial crimes, but were spared the gallows in favor of life on Norfolk Island.

In reality, only about 15% of convicts had done anything deserving of the death sentence. Most were guilty of non-violent crimes against property, for which the average sentence was three years.

Even so, treatment of prisoners was harsh. One of the more severe governors, Ralph Darling, commanded that,

every man should be worked in irons that the example may deter others from the commission of crime to hold out [Norfolk Island] as a place of the extremest punishment short of death.

They worked in the mill, built roads, officers houses, and other government buildings.

For the Term of His Natural Life by Marcus Clarke describes Norfolk Island as a “Hell in Paradise.”

An 1846 report by magistrate Robert Pringle Stuart exposed the horrors of torture and incessant flogging, the scarcity and poor quality of food, the inadequacy of housing and corruption of overseers.

There were several unsuccessful mutinies, all desperate attempts to escape the hardships. On visiting Norfolk Island to comfort mutineers sentenced to execution, Father William Ullathorne, Vicar general of Sydney, remarked:

An audio-visual historical presentation on the island shows visitors what life was like on an oppressive penal colony.

Norfolk Island ceased to be a penal colony in May 1855 after the convicts were transferred to Tasmania. Transportation ceased, and it was left abandoned.

But a year later in June of 1856, the British government permitted the relocation of the Pitcairners to Norfolk Island. Descendants of the HMS Bounty mutineers—including those of Fletcher Christian—arrived from the Pitcairn Islands to occupy many of the old penal settlements, and continue their lives as farmers and whalers.

In loving memory of Peggy Christian, the loving wife of Fletcher Christian who died on Norfolk Island, May 12, 1884 aged 64.

The new community of Pitcairners would have appreciated the mutiny attempts of the mistreated convicts, as the 1935 award-winning movie Mutiny on the Bounty, starring a clean-shaven Clark Gable portrayed.

Captain Bligh:Mr Christian, they respect but one law – the law of fear…I expect you to carry out whatever orders I give, whenever I give them.

Fletcher Christian: Now you’ve given your last command on this ship. We’ll be men again if we hang for it.

The cemetery is full of convicts’ graves and those of the descendants of the “Mutiny on the Bounty” Pitcairners.

Today, Norfolk Island is part of the Australian Convict Sites UNESCO World Heritage Site and represents, “… the best surviving examples of large-scale convict transportation and the colonial expansion of European powers through the presence and labour of convicts.”

The only inhabitants of the jail today are a gaggle of geese. Here they are working the roads in a chain gang.

And the only guards left on the island are the “masked boobies”, a gannet-like bird that breeds on tropical islands in the south pacific. But at 3 ft (91 cm) tall with a 5 ft (160 cm) wingspan, you don’t want to get on the wrong side of these guys.

Napoleon Surrenders – marking the End of an Era