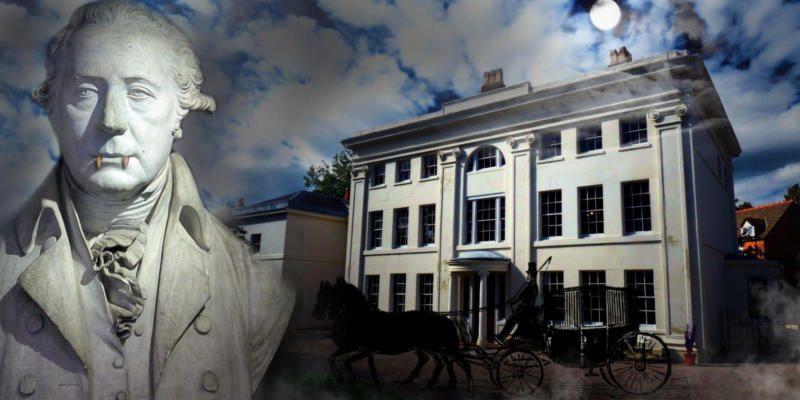 The year was 1775. Some very strange events had been observed at an elegant white mansion in Birmingham, England.

In the afternoon before each full moon, one by one, black carriages would start to arrive. Out of each carriage appeared a lone cloaked figure, which moved stealthily to the front entrance and disappeared inside the ghostly building.

The local police received many worrying reports: the cook heard howls of laughter; the gardener remembered squeals of excitement; and the butler reported seeing flashes of light.

Were these men doing the work of Satan? Were they sprouting thick hair and long pointed teeth? Were they preparing to go hunting for human flesh?

No, it was something far more sinister. For these were members of a society of intellectuals called the “lunarticks”, and they gathered to do something that, today, we find highly disagreeable.

They talked to each other.

But this was no idle chit chat—their conversations were about things the world had never seen.

The main ringleader was an English manufacturer named Matthew Boulton. Dubbed the Richard Branson of his day, Boulton harnessed the newest technology—steam power—to mechanize factories and mills. He supplied the Royal Mint with steam-powered machines to foil the scourge of counterfeiters that had taken over Britain’s coinage—and made enough new copper coins to pay real wages to the working poor across Britain.

Boulton was guilty of industrial revolution on a grand scale. From humble beginnings, he expanded his father’s buckle-making business into the largest manufacturing complex in the world—the Soho Manufactory— producing all manner of fine decorative metal work.

Boulton’s co-conspirator was a wickedly clever man from one of the most notorious families in history—the Darwins. Erasmus Darwin was an English physician, natural philosopher, physiologist, and slave-trade abolitionist.

Grandfather of the infamous evolutionary Charles Darwin, Erasmus Darwin’s poems included stanzas about natural history, and a statement of evolution and the relatedness of all forms of life.

They called themselves “lunarticks” (a play on the word lunatics), and later, the “Lunar Society” because they only met on days with a full moon, claiming that it provided enough light for a safer journey home.

But in truth, the full moon inspired their wicked genius and they fed off each other’s intelligence like a group of vampires feeding off blood.

For it was the dawn of the Industrial Revolution and members of the Lunar Society were developing concepts and techniques in science, agriculture, manufacturing, mining, and transport that would change the world.

Boulton and Darwin were not alone—they had recruited others to join their Lunar Society, including Boulton’s own business partner, James Watt.

Watt modified Newcomen’s steam engine, improving it’s efficiency and cost-effectiveness. It powered the industrial revolution not just in Britain, but around the world. Every light bulb in existence bears his name—”watt”, the unit of power.

The famous Staffordshire potter, Josiah Wedgwood (1730 – 1795) was also a member of the Lunar Society. He founded the Wedgwood Company in Stoke-on-Trent, England, and is credited with bringing the entire pottery trade into the industrial age through the division of labor and mechanization.

Their influence spread far and wide in a network that reached the American colonies. There, a co-conspirator named Benjamin Franklin helped spread their evil, industrial ways.

Franklin was introduced to the Lunar Society when he traveled to Birmingham, England, in 1758, with the intention of improving “Acquaintance among Persons of Influence”. With the lunarticks, he had hit the jackpot, and returned to Birmingham in 1760 to conduct experiments with electricity at Boulton’s house.

Another world-changing meeting had finally come to a close and the Lunar Society left Boulton’s home. One by one, black carriages arrived and then vanished into the night … until the next full moon.

Can Another Cup of Coffee Improve Your Writing?—an examination of how coffee affects creativity and how English Coffeehouses helped start the Enlightenment.
Is Reading Books a Dying Art—explores the difference between concentrated reading of long texts and scanning of multiple sources of short text on the web.
The Art of Café Society—looks at the origins of cafés and how they contributed to enlightened thought and celebrates the beautiful cafés of the 19th century.