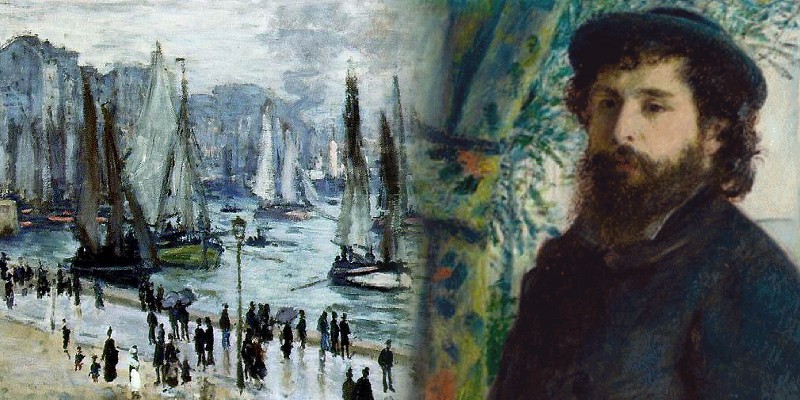 Monet waited nervously for people to arrive at his new exhibition, organized with the help of friends Pierre-Auguste Renoir, Edgar Degas, Edouard Manet, Camille Pissarro, and others.

The well-known photographer Nadar (the pseudonym of Gaspard-Félix Tournachon) had recently moved to a new location and offered his studio to Monet and friends to use for their exhibition.

Times were hard. The artists were constantly in need of money. An economic slump had hit the art market and the scant sales through art dealers had all but dried up.

The young artists had banded together to form a guild-like association and called themselves “Société anonyme des artistes peintres, sculpteurs et graveurs” (Anonymous Society of Painters, Sculptors, and Engravers).

They wanted to show their work as independent artists, free from any restrictions imposed by the increasingly conservative Salon de Paris.

Exhibition at the Salon de Paris was considered essential for any artist to achieve success in France.

But the Salon’s jurors had snubbed Monet and the group of artists, and refused to exhibit many of their works. They opposed the artists’ shift away from traditional styles.

It was the rejection of his larger paintings, like Women in the Garden (below) that finally convinced  Monet of the need for his own exhibition.

Now was the opportunity to proudly show another of his larger works—The Luncheon. It too had been turned down by the Paris Salon.

But it was Monet’s own painting, Impression, Sunrise that would lead to the new name for the group.

What was intended as an insult by art critic Louis Leroy to describe the vague forms and incomplete appearance, was taken as a token of esteem by the group of artists, who would become known as “Impressionists”.

In his article “The Impressionist Exhibition”, Louis Leroy tried to ridicule the Impressionists by writing from the imaginary perspective of a traditional artist who was shocked at seeing their work:

‘Ah! This is it, this is it!: he cried in front of n. 98. ‘This one is Papa Vincent’s favorite! What is this a painting of? Look in the catalogue.’ ‘Impression, Sunrise.’ ‘Impression– I knew it. I was just saying to myself, if I’m impressed, there must be an impression in there… And what freedom, what ease in the brushwork! Wallpaper in its embryonic state is more labored than this seascape!”

During the exhibition, Monet talked about his technique for landscapes in an interview with Maurice Guillemot for La Revue Illustrée:

A landscape is only an impression, instantaneous, hence the label they’ve given us– all because of me, for that matter. I’d submitted something done out of my window at Le Havre, sunlight in the mist with a few masts in the foreground jutting up from the ships below. They wanted a title for the catalog; it couldn’t really pass as a view of Le Havre, so I answered: “Put down Impression.” Out of that they got impressionism, and the jokes proliferated….”

Followers of Impressionism argued that it represented how the eye sees subjects—not in terms of lines and contours, but through the interplay of light and color to form an impression.

Although initially skeptical, the public came to believe the Impressionists had developed their own highly original style.

Impressionism changed the world of painting by disrupting the conventions of the past. It paved the way for a number of later styles, including Neo-Impressionism, Post-Impressionism, Fauvism, and Cubism.

The Groundbreaking Impressionist Exhibition of 1874

Monet tried to sell Impression, Sunrise at the exhibition for 1000 francs but failed.

Life in a Scottish Fishing Village during the Victorian Era

The Longchamp Racecourse and Fashion Promenade