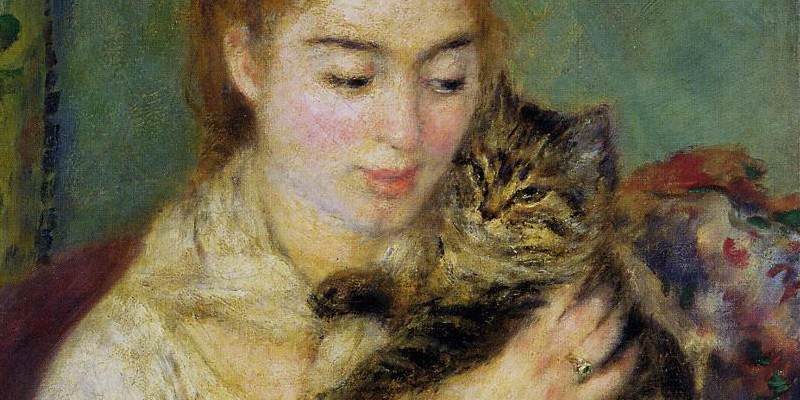 According to the 2015-2016 APPA National Pet Owners Survey, Americans own 86 million* cats, second in popularity only to freshwater fish. And in Europe, it’s the same story, with an estimated 99 million* cats.  *Figures from APPA (US) and FEDIAF (Europe).

They’re our cuddly companions, helping to calm our anxieties, console our afflictions, and even provide us with hours of entertainment.

A 20-year study conducted by the University of Minnesota found that owners of cats were 40% less likely to die from a heart attack. Furthermore, just 15-30 minutes of quality time with a cat can boost our body’s serotonin levels—a naturally occurring chemical in the brain (a neurotransmitter) that helps regulate our mood, appetite, sleep, and memory.

Even so, our relationship with cats has had its ups and downs through history.

9,500 years ago in Cyprus, a cat was laid to rest in a grave next to a human, along with seashells, polished stones, and other decoration. This recent discovery tells us that our relationship with cats predates Ancient Egypt—originally thought to be the origin of cat domestication—by 4000 years!

Cats’ ability to kill cobras and control vermin made them sacred  animals in Ancient Egypt. Bastet was the goddess of cats, protection, joy, dance, music, family and love. As such, she was often depicted in cat form.

In hieroglyphics, cats were drawn as wearing jewelry and were even mummified after death. Households losing a cat often shaved their eyebrows to signify they were in mourning.

These graceful creatures were so revered that killing one, even accidentally, meant the death penalty.

Cats might have been present in Britain in the Iron Age, but it is thought Romans introduced them to Europe from Egypt.

During the Age of Discovery, cats spread around the globe thanks to their usefulness for controlling rodents on board ship. They were also seen as good-luck charms.

I believe cats to be spirits come to earth. A cat, I am sure, could walk on a cloud without coming through.Jules Verne

In the medieval period, the cat’s luck ran out. In an era of plague, people wanted scapegoats and turned to superstition for the answers. Although cats were still seen as valuable mice and rat catchers, it was their independence and tendency to “play” with their prey that made some observers think they were in league with the devil.

To this day, the expression to play cat and mouse with someone means to heartlessly toy with or torment them.

Edward, Duke of York, summed up the public fervor in the early 15th century: “their falseness and malice are well known. But one thing I dare well say that if any beast has the devil’s spirit in him, without a doubt, it is the cat, both the wild and the tame.”

In 1484, Pope Innocent VIII declared that “the cat was the devil’s favorite animal and idol of witches.” Cats were killed en masse. Little did people realize that cats were actually helping to control the spread of plague by killing rats that hosted disease-ridden fleas.
Contains affiliate links
It took fairy tales to recast cats in a good light. The 17th-century “Puss in Boots” tells the tale of a cat that single-handedly wins its low-born master the hand in marriage of a princess in a wealthy kingdom.

“Puss in Boots” not only changed his master’s fortunes but that of cats in general.

So too did the work of Louis Pasteur in the 19th century. His germ theory popularized the notion that a clean home was a germ-free home. Since they spent so much time grooming themselves, cats were seen as clean animals to have in the home.

Queen Victoria’s relatively isolated childhood helped mold her passion for animals. In addition to her many dogs, she had two blue Persian cats. That was all it took to ignite a groundswell of interest in cat ownership across Europe.

And so began a Victorian love affair with cats.

What greater gift than the love of a cat?Charles Dickens

The first National Cat Show was organized by Harrison Weir (1824 – 1906) at the Crystal Palace in London. Known as “The Father of the Cat Fancy”, Weir was an experienced cat breeder and wrote (and illustrated) several books, including the first pedigree cat book Our Cats and All About Them.

A cat has absolute emotional honesty: human beings, for one reason or another, may hide their feelings, but a cat does not.Ernest Hemingway

Today, our love affair with cats continues unabated, and we often use phrases reflecting our perception of cats as animals of good fortune:

We see cats as beautiful animals with poise and style. Describing someone as feline means that they resemble a cat’s sleek gracefulness.

Cats are very inquisitive, often leading them into trouble. Curiosity killed the cat is one of the most commonly-used cat expressions, warning  of the dangers of unnecessary investigation.

We’ve selected some popular GIFs of cats that are not lacking in the curiosity department. Vote for your favorites.

10 Amazing Facts About Cholera and The Great Stink of London