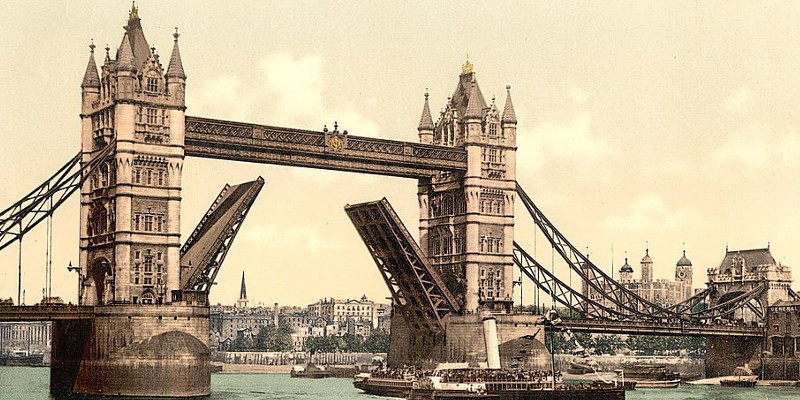 Like many older cities around the world, London has changed with the times.

But unlike many cities, a great deal of old London remains for us to explore.

Let’s take a tour of London as Sir Arthur Conan Doyle would have known it in his fictional characterizations of Sherlock Holmes.

Under most of the old images is a link that will open a Google Street View “live” 360° window in place within the article, allowing you to pan and zoom to see things from different angles or perspectives.

The two images above show the clock tower and Plough Inn at Clapham Common.

The clock tower has stayed the same, helping us fix our location, but the row of buildings on the right has undergone development. The inn now has a mock Tudor frontage and is owned by a pub chain under a different name. It’s also gained a reputation for being haunted.

In the 1970s, an apparition is said to have appeared in one of the bedrooms being occupied by a barman, who resigned immediately after the experience. Referred to as Sarah, the ghostly figure has been described as having “raven hair running over her shoulders.”

Perhaps Sarah was trying to tell the owners not to make too many changes.

By comparing the above two images looking down Fleet Street towards Ludgate Hill and St Paul’s Cathedral, we see that there was a bridge in 1895 that is no longer there today. It was a railway bridge for the London, Chatham and Dover railway.

Closed in 1923, it was eventually demolished in 1990. In the below drawing from 1872, we can see a steam train crossing the bridge when the street was much narrower and caused severe traffic congestion.

If you’re in this part of London, look for a blue plaque at the bottom of Ludgate Hill, marking the spot where the first London newspaper—the “Daily Courant”—was published in 1702.

One of the attractions of Piccadilly Circus today is the neon signage and video display. There’s not much neon in the 1895 image but most of the grand old buildings surrounding this famous meeting place still exist. The circus—from Latin for “circle”—was originally built to connect Regent Street with Piccadilly.

Big red double decker buses have replaced the Victorian horse-drawn carriages … and did you notice the carriages in 1895 are going anticlockwise around Piccadilly Circus—the opposite of today’s traffic convention in the UK?

Just as at Piccadilly Circus, we see the Victorian horse-drawn “omnibusess” at Hyde Park Corner in 1895.

The omnibus was one of the most common means of getting around London (and other cities in Europe and the United States) in the late 19th century.

It was a very cozy arrangement indeed, with two wooden benches facing each other, the passengers’ knees almost touching the person sitting opposite.

There were also double-decker omnibuses, with the top deck open to the elements and the benches back-to-back.

Some locations in London are iconic and known the world over—Trafalgar Square being one of them. It’s good to see that very little has changed since 1890. Some things should stay the same.

Britain’s first specialist commercial building, the Royal Exchange dates back to 1571, when it was opened by Queen Elizabeth I.

The Great Fire of London destroyed the first building in 1666, the present one being built in the 1840s and occupied by Lloyd’s insurance for nearly 150 years.

Here, the present starts to look radically different from the past.

The 1890s image below is the corner of Holborn and Snow Hill, where in 1883, Henry Wellcome, founder of Burroughs Wellcome and Co. (now GlaxoSmithkline, one of the world’s largest pharmaceutical companies) opened its headquarters.

The impressive late Victorian building was constructed of red brick, with granite pillars around the entrance.

The interior was designed by Christopher Dresser—considered to be Britain’s first industrial designer.

On the night of May 11, 1941, the building was completely destroyed in a German bombing raid.

Today, a bland commercial building stands on the site of the beautiful curved Victorian, although there are plans for a new luxury hotel.

What a great name—”rotten row”. Wondering what the story is behind it? It’s a fascinating one.

Rotten Row is a track running along Hyde Park’s south side, from Hyde Park Corner to the Serpentine Road. At the time of the 1890s photograph, it was a fashionable place for upper-class Victorian Londoners to ride their horses.

The story goes that at the end of the 17th century, highwaymen were quite common in Hyde Park, and King William III wanted to create a safer way to commute between his new court at Kensington Palace, and the old one at St. James’s Palace.

So in 1690, a broad avenue was built through Hyde Park, lit with 300 oil lamps. It was Britain’s first artificially lit highway. Called “Route du Roi”—French for King’s Road—Londoners nicknamed it “Rotten Row”, and the name stuck.

Tower bridge is another iconic symbol of London, built between 1886 and 1894. The 1895 image above shows the new bridge shortly after completion.

The bridge has remained the same but notice what’s going on behind. London’s skyline is becoming a hotch-potch of oddly-shaped buildings with correspondingly odd nicknames.

To the right of the bridge in our present-day view, there’s the “Gherkin” opened in 2004, and visible under the bridge, there’s an odd-looking building nicknamed the “Walkie-Talkie” tower because of its shape. Completed in 2014, it is London’s fifth-tallest building, but unlike most skyscrapers that get narrower the higher up you go, this one actually gets wider.

We’re going to finish our exciting tour of Victorian London with a view of the Victoria Embankment. There are some big changes here!

Cleopatra’s Needle to the left of center in both images gives us our bearings.

Within Google Maps, we’re standing on the Golden Jubilee Bridge—one of a pair of cable-stayed pedestrian bridges running either side of the Victorian-era Hungerford Bridge. We’re looking downstream towards the Waterloo Bridge. Note the charming paddle steamer—very different from today’s riverboats.

As we look downstream in the 1895 image, we’re actually looking at the original Waterloo Bridge, opened in 1817, and so named to commemorate the allied victory at the Battle of Waterloo. This bridge had nine arches compared to today’s bridge which only has five. Famous paintings of the nine-span bridge were created by Claude Monet and John Constable. But the painting that shows the bridge most clearly is by Emile Claus (below).

The World’s Libraries — beautiful buildings for all to enjoy