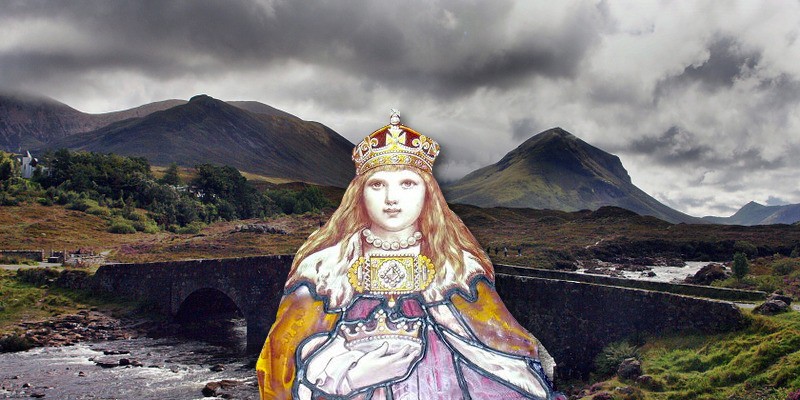 How an infant princess sparked a rivalry for the crown and a fight for freedom.

ur story begins when Alexander III of Scotland dies in 1286.

Alexander’s wife and three children had died before him, leaving his three-year-old granddaughter Margaret, “the Maid of Norway”, as heir to the throne.

A Norwegian princess, she was the daughter of King Eric II of Norway and Alexander’s daughter, Margaret of Scotland, who died giving birth to the little princess.

After the death of his last son, Alexander persuaded the Scottish magnates to pledge allegiance to the young Margaret as Heir presumptive.

…  we firmly and faithfully promise that if our said lord king happens to end his last day in this life leaving no legitimate son or sons, daughter or daughters … we each and all of us will accept the illustrious girl Margaret, daughter of our lord king’s daughter Margaret, of good memory, late queen of Norway …

However, not all Scottish magnates were happy with an infant Queen ruling over Scotland.

Two prominent figures who asserted competing claims to the throne were Robert Bruce, 5th Lord of Annandale (grandfather of the future King Robert the Bruce) and John Balliol, Lord of Galloway.

The rivalry between Bruce and Balliol had the potential to ignite a civil war.

Realizing this, the Guardians of Scotland (a group of magnates ruling in Margaret’s absence due to her age) had kept King Edward I of England apprised of the situation.

Edward threw his support behind Margaret.

He secretly wanted a future marriage with his own infant son, Edward of Caernarfon (the future King Edward II of England).

A thriving wool trade had made Scotland wealthy and an arranged marriage would be a convenient way to unite the kingdoms of England and Scotland.

Signed by the Guardians and guaranteed by King Edward I, it specified that Margaret would marry the King Edward’s son and that Scotland would remain “separate and divided from England according to its rightful boundaries, free in itself and without subjection.”

Scottish independence wasn’t really what Edward had in mind, so English negotiators included enough reservations to render such clauses useless.

She was just seven years old.

Her death left 13 rivals to the throne—the two strongest candidates being Bruce and Balliol.

To avoid any chance of civil war between the rivals, the Guardians asked King Edward to arbitrate between competing claims.

Edward saw this as an opportunity to gain control over Scotland.

He agreed to act as arbiter, on one condition: that he be made Lord Paramount of Scotland—the feudal superior of the realm.

Unacceptable to the Guardians, they refused, but it was too late—Edward’s army was already on the march.

Besides, most claimants had significant lands in England, and cooperation with Edward was the only way to keep them

As Lord Paramount of Scotland, Edward I ordered every Scottish royal castle to be placed under his control.

And so began the contest for the Scottish crown.

Known as the “Great Cause”, claimants were required to produce evidence of descent from King David I of Scotland, and documents supporting their rights to the crown.

On 17 November, 1292, Edward and a court of 104 auditors decided on John Balliol, who was crowned King of Scots at Scone Abbey 13 days later.

Edward maintained that Scotland would be a vassal state.

In 1294, he summoned John Balliol to London and demanded Scottish troops and funds to support his invasion of France.

On Balliol’s return to Scotland, he convened a war council and planned to defy King Edward’s demands.

And so began the struggle for Scottish independence.