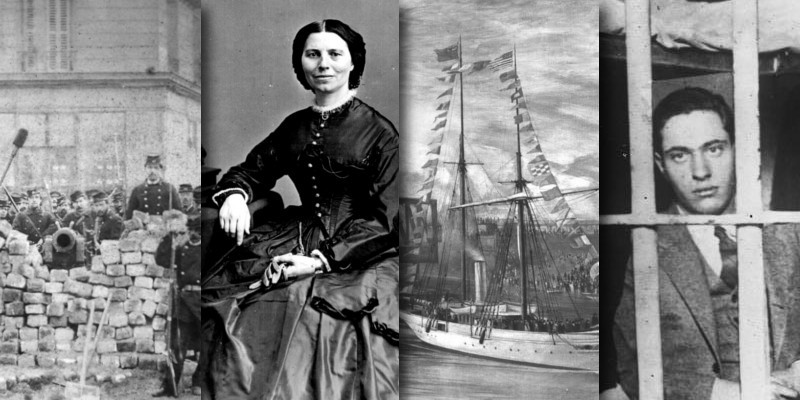 A selection of events that happened on this day in history.

French troops invade the Paris Commune, engaging its residents in "The Bloody Week"

A radical socialist and revolutionary government called "The Paris Commune" ruled Paris from 18 March to 28 May 1871.

Following the collapse of Napoleon III's French Second Empire during the Franco-Prussian war, Paris became a hotbed of working-class radicalism.

Many Parisians, especially workers and the lower-middle classes, supported a democratic republic and wanted Paris to have its own self-governing elected council, something denied it by a national government wary of the capital's unruly populace.

An uprising ensued in which the Commune refused to accept the authority of the French government. Soldiers of the Commune's National Guard killed two French army generals.

The regular French Army was sent in to quell the uprising, resulting in "La semaine sanglante" ("The Bloody Week") beginning on 21 May 1871.

Although exact numbers are not available, thousands of Communards died, with some estimates as high as 20,000.

The Commune frightened the middle and upper classes in other countries such as the United States.

Debates over the outcome of the Commune influenced the ideas of Karl Marx, who described it as the "dictatorship of the proletariat".

Providing emergency assistance, disaster relief, and education in the United States, the American Red Cross is a humanitarian organization and the designated US affiliate of the International Federation of Red Cross and Red Crescent Societies.

After experiencing the International Red Cross during the Franco-Prussian War (July 1870 – May 1871) in Europe, Clara Barton was determined to bring the organization to America.

She was a well-connected lady, and encouraged John D. Rockefeller, Lars Kovala and three others along with the federal government, to donate money for a national headquarters near the White House.

In 1994, the American Red Cross was ranked 3rd "most popular charity/non-profit in America" with 48% of Americans over the age of 12 choosing "Love", and "Like A lot" to describe the Red Cross.

An outstanding example of Victorian ingenuity, the Manchester Ship Canal is a 36-mile-long (58 km) inland waterway in the North West of England linking Manchester to the Irish Sea.

Several sets of locks lift vessels about 60 feet (18 m) up to Manchester, where the canal's terminus was built.

Along its route is the Barton Swing Aqueduct, the only swing aqueduct in the world.

On the left, another canal passes over the Manchester Ship Canal—that's Victorian engineering! And on the right is the swing road bridge—a bridge that "swings" out of the way to allow ships to pass.

The sheer size of ships on the canal and the change of gradient make this a very important feat of engineering.

Leopold and Loeb commit "the crime of the century"

An example of the dark side of history.

In May 1924, two wealthy students at the University of Chicago known as "Leopold and Loeb" committed "the crime of the century".

Nathan Freudenthal Leopold, Jr. (1904 – 1971) and Richard Albert Loeb (1905 – 1936) kidnapped and murdered 14-year-old Robert Franks in Chicago to demonstrate that their perceived intellectual superiority would enable them to carry out the "perfect crime" and absolve them of responsibility for their actions.

Leopold and Loeb knew each other casually while growing up, but it was at the University of Chicago that they discovered a mutual interest in crime.

Friedrich Nietzsche's concept of "supermen" was particularly fascinating to Leopold. These were transcendent individuals, with extraordinary abilities and superior intellects that allowed them to rise above the law.

He believed he was one of Nietzsche's "supermen" and hence was not bound by society's normal ethics and rules.

In a letter to Loeb, he wrote,

A superman ... is, on account of certain superior qualities inherent in him, exempted from the ordinary laws which govern men. He is not liable for anything he may do.

Having convinced Loeb that he too was a 'superman", the two set about testing their perceived superiority with a series of petty crimes.

One thing led to another and the two became more and more daring, until, disappointed with the lack of media coverage for their deeds, they planned what they believed to be the "perfect crime".

Poor, unsuspecting Robert "Bobby" Franks, the son of a wealthy Chicago watch manufacturer, was chosen as the victim.

Using a rented automobile, they offered Franks a ride as he walked home from school. Initially refusing, Loeb persuaded Bobby to get in to discuss a tennis racket that he had been using.

What took place next was one of the most shocking murders in history.

Although the exact details are disputed, it is thought that Leopold was behind the wheel of the car while Loeb sat in the back seat with a chisel—Bobby Franks sitting directly in front of him.

Loeb plunged the chisel, again and again, into Bobby's head, then dragged him into the back seat, where he was gagged and soon died.

With the body out of view on the floor, they drove 25 miles south of Chicago to dump the body.

Waiting for nightfall, they removed Bobby's clothes and concealed the body in a culvert next to a railroad track. To obscure identification, they poured hydrochloric acid over various parts of the body.

This was just the beginning for Leopold and Loeb.

On returning to Chicago, Leopold called Bobby's mother, telling her of his kidnapping and to wait for a ransom note.

With the note mailed, their blood-stained clothes burned, and the vehicle upholstery cleaned, Leopold and Loeb sat down to play cards.

Their terrible crime started to unravel when Bobby Frank's body was discovered, but convinced they had covered their tracks, they went about life as usual ... except for one thing: Leopold couldn't keep his mouth shut. He spoke freely to police and reporters, saying, "If I were to murder anybody, it would be just such a cocky little son of a bitch as Bobby Franks."

After police found a pair of Leopold's eyeglasses near the body, his alibi didn't wash. The "perfect crime" was exposed and the two confessed to the murder, only being saved from the hangman's noose by a million dollar fee and an impassioned plea from one of the best defense attorneys of the time.

Mompsie feels less terrible than she might, thinking you did it, and I'm not going to take that shred of comfort away from her.

The two pointed the actual murder at each other, with Loeb saying, "Mompsie feels less terrible than she might, thinking you did it, and I'm not going to take that shred of comfort away from her."

"The killing was an experiment," Leopold told his attorney. "It is just as easy to justify such a death as it is to justify an entomologist killing a beetle on a pin."

A Brief History of Christmas Markets