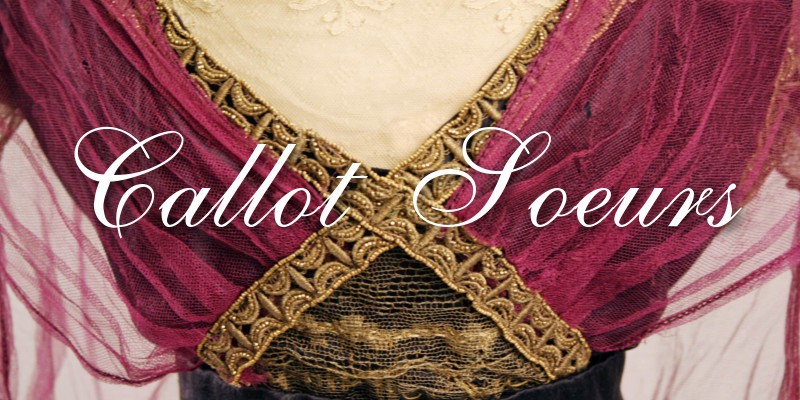 When a young painting conservator from New York University happened upon some Louis Vuitton trunks in a 15th-century Florentine villa, she could not believe what was inside.

Undisturbed for almost 90 years were the most beautiful dresses she had ever seen, each with the label “Callot Soeurs”.

This was no ordinary find. Not many Callot Soeurs dresses have survived in such pristine condition.

They belonged to Hortense Mitchell Acton, an heiress from Chicago, married to Arthur Acton, a successful Anglo-Italian art collector and dealer.

Mrs Acton had been a valued client of Callot Soeurs from the moment they opened their couture house in 1895.

After losing Joséphine to suicide in 1897, Marie, Marthe and Régine continued to run the business.

Vogue magazine called them the Three Fates, and declared they were “foremost among the powers that rule the destinies of a woman’s life and increase the income of France.”

Among the first of the design houses to reject the corset, Callot Soeurs knew what women wanted—more freedom of movement, fluid lines, and exquisite detail.

In a male dominated business, the sisters stood out by including the word “Soeurs” (French for sisters) in their label.

For Hortense Acton, Callot Soeurs’ gowns were perfect for throwing parties at La Pietra—the Acton’s Florentine villa. She entertained everyone from Gertrude Stein to Winston Churchill.

Just how the dresses survived is somewhat of a miracle.

When the Fascists took over Italy, most of Mrs. Acton’s expatriate friends upped and left.

But not her husband. He was determined to stay, ride out the storm and look after the house and art collection.

Poor Hortense Acton stayed with him, only to be arrested and imprisoned. The villa and art collection were confiscated.

As if from a scene out of the Sound of Music, both Actons eventually managed to escape through Switzerland.

Today, they form part of a collection at La Pietra which was bequeathed to New York University in 1994.

Several other Museums house a collection of Callot Soeurs gowns, including The Metropolitan Museum of Art, the Los Angeles County Museum of Art, The Museum at the Fashion Institute of Technology, and the Museum of Decorative Arts, Paris.

In each case, the collections show the signature elements of the house of Callot Soeurs: antique lace trimming, Orientalist textiles, lavish embroidery, and bead- or ribbonwork.

Exemplifying the fashion aesthetic of the time, this 1914 gown uses multiple layers and textures to give the appearance of an unstructured and spontaneous design.

One of Callot Soeurs’s greatest supporters was American socialite Rita de Acosta Lydig, regarded as “the most picturesque woman in America.”

Ordering dozens of dresses at a time, she would design them herself and have them handmade by Callot Soeurs.

So exacting were her tastes that when she discovered her husband was having an affair with a poorly dressed woman, she sent the mistress to Callot Soeurs for new clothing.

She wore a silver Callot Soeurs dress for this 1911 Giovanni Boldini portrait.

In Marcel Proust’s second volume of “Remembrance of Things Past”, he asks his girlfriend, “Is there a vast difference between a Callot dress and one from any other shop?” To which she replied, “Why, an enormous difference. Only, alas! What you get for 300 francs in an ordinary shop will cost you two thousand there. But there can be no comparison; they look the same only to people who know nothing about it.”

Renowned for their exquisite lacework, such as this black, imbricated leaf pattern overlaid on pale taffeta. Finely embellished with black and silver sequins and rhinestones, this dress was exemplary of fashions in La Belle Époque.

By the Roaring Twenties, Callot Soeurs had branches in Nice, Biarritz, Buenos Aires, and London.

Callot probably has more rich clients than any other establishment in the world. They come from South America, from South Africa, and as far east as Japan.

One of the twentieth century’s greatest designers—Madeleine Vionnet—was Callot’s head of the workroom, or première, before venturing out on her own.

She considered her time at Callot invaluable later in her career.

Without the example of the Callot Soeurs, I would have continued to make Fords. It is because of them that I have been able to make Rolls RoycesMadeleine Vionnet

And she expressed great respect for the house’s head designer, Madame Gerber.

A true dressmaker and a great lady totally occupied with a profession that consists of adorning women . . . not constructing a costume.Madeleine Vionnet

Valentine’s Day in the Victorian Era